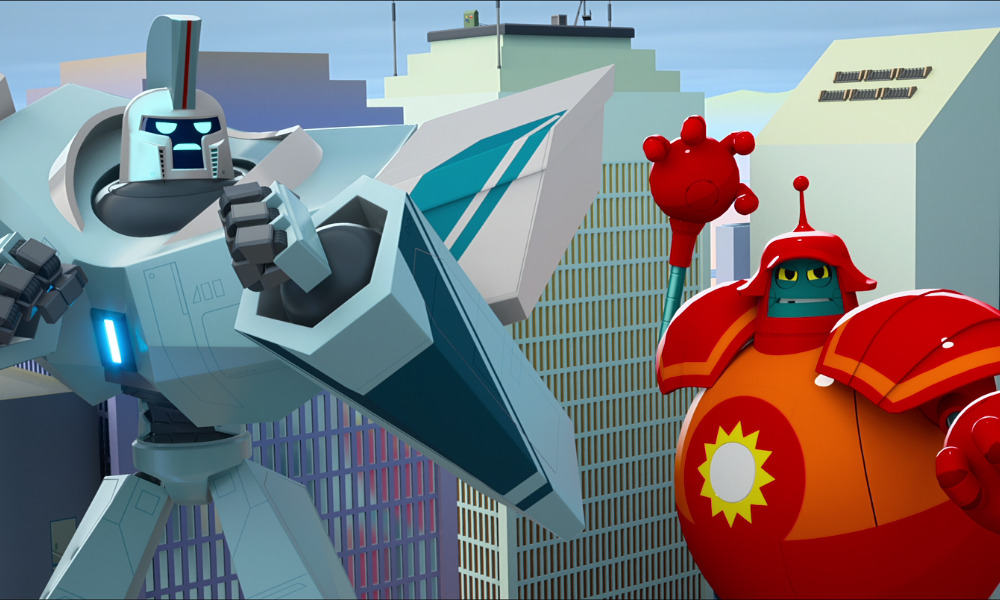 Earlier this week, we were excited to offer a pre-premiere sneak peek at the new Netflix animated series Super Giant Robot Brothers, a colorful action-comedy about two misfit mecha siblings — childlike and bubbly Shiny and steely-serious Thunder — who help their whiz kid inventor Alex Rose save the planet from attacking space monsters (when they stop squabbling). Created and executive produced by Love, Death + Robots alums Victor Maldonado and Alfredo Torres and directed by Oscar winner Mark Andrews (Brave), the 10 x 27′ Kids & Family series is now available to stream after launching on Thursday, August 4.

On the eve of the premiere, we heard from series executive producer Jared Mass, Head of Reel FX Originals, and Steve O’Brien, CEO of Reel FX (reelfx.com), which has emerged as a solid animation player with outposts in Hollywood and Montreal since setting up its Dallas HQ in 1995 with eight employees. Having used its CG skills to bring the Oscar-nominated feature The Book of Life as well as Free Birds, Rumble, Back to the Outback and Scoob! to screens, the studio tested the newly charted waters of real-time virtual production for Super Giant Robot Brothers.

Here’s what Steve and Jared taught us about the secrets of building relatable robo siblings:

Animation Magazine: When did you and the Reel FX team get involved with Super Giant Robot Brothers?

Steve O’Brien: We were working on a film project with Victor and Alfredo back in 2016, and that project was put on hold, so we asked them to pitch us a couple ideas for our development slate to pass some time. One of those ideas was “Brobots” which we immediately fell in love with, and later became Super Giant Robot Brothers.

What were the key inspirations/aesthetic goals for the design and animation?

Jared Mass: Mark Andrews and Tommy Blacha were inspired by old kaiju movies from the ’60s and ’70s and worked with our production designer Katy Wu to make a show that’d live alongside other shows in the genre like Johnny Socko and His Flying Robot and Ultraman. Because we knew we’d be visualizing and making the show in the Unreal Engine and Mark is a big fan of harder lines and angles we worked to augment some of the references with more of a video game aesthetic.

In a nutshell, what was the real-time process like for this project? How did it vary from other “standard” CG productions?

Steve: First, the front-end is entirely different. Storyboards are optional — we used comic-style story panels as our shooting guide. Unlike traditional animation, you are on the stage creating bins of shot options for editorial to pull from as you would for a live-action shoot. You’re building assets ahead of time for use on stage, and then you come off the stage with a rough layout, which is an alternative or complementary to the storyboard phase.

Secondly, many aspects of digital production are transformed, from surfacing to character rigs to lighting setups. So yes, most everything is transformed or impacted in some way from ‘standard’ CG productions.

Were there any major learning curves in creating a real-time series?

Steve: We essentially built a completely new pipeline, and we produced a new show at the same time — kind of like laying tracks just a few feet in front of the train. Definitely a major learning curve, but having a highly tested scalable pipeline for shows like this is the breakthrough that came out of the process. We have several more shows we are planning as we speak.

Since the show was directed in real time alongside mo-cap actors and a whole crew, was this a new experience for the team?

Steve: Even though our director Mark Andrews came from Pixar, he is completely comfortable working this way and actually prefers it, and our producers and crew who managed the shoot are very experienced in virtual production. Many animators don’t like the idea of using mo-cap, but for this show and our process, mo-cap wasn’t a replacement for key frame animation. Rather, the mo-cap data served more as a framework for layout and incredible reference as a jumping off point for our animation team. Once the animation team got into it, they loved the process.

What was it like working among people again after the isolated pandemic years?

Steve: It was fun! Of course, we shot the series in between COVID waves, which caused some delays, and we had the healthcare company there doing daily tests and so forth. That part was a pain, but if you take a look at the BTS video that’s floating around, it’s clear how much fun it was for the whole team to be together.

Since Alex Rose invented Shiny when she was just a little tot, the bot was designed with simple shapes, bright colors and a youthful personality. [Netflix © 2022]

The Robo Bros have a lot of personality for two giant machines — how did the artists and animators create such engaging performances?

Jared: Shiny and Thunder were designed to be a reflection of Alex Rose’s personality at the age she invented them. At two years old, the artists thought genius Alex would be more into simple shapes and thus created Shiny with a bulbous body, intense curiosity and a childlike spirit. At 12, Alex has been taking life and her job more seriously and thus would have designed Thunder to be more pragmatic and centered.

The animators were able to get the best ever reference from the data given to them caught using motion-capture performance, and then they’d augment that data to enhance character performance. It was a big win for the process of creating engaging characters.

Which creators, films or TV shows have inspired you the most in your animation career?

Steve: I grew up watching Saturday morning shows — some I remember most are the Japanese shows like Speed Racer, Kimba the White Lion and Ultraman … one of the original robots versus kaiju shows. We’ve been lucky to work with so many inspiring creators and filmmakers, and I try to absorb something new from each experience. Mark has been a great partner and collaborator on this series, not to mention his energy level is off the charts so it’s been a fun ride working together.

If you could, would you rather be a kaiju or a giant robot?

Jared: Definitely a robot — probably a Transformer, because who wouldn’t want to save the world and turn from a robot into a cool car and a gnarly beast?

Steve: If only robots could have feelings, I’d definitely be a giant robot like Shiny or Thunder. Wait, can robots actually have feelings? You’ll have to watch ALL of Season One to find out.

What kind of reactions have you heard to Super Giant Robot Brothers so far? What do you hope the Netflix audience gets out of this monster-blasting action-comedy?

Steve: We were at Annecy, and took part in several events with Epic where we debuted the Super Giant Robot Brothers trailer and gave a peek behind the scenes of how it was made. The audience seemed to be really into it and we had a lot of fun talking to the animation community about it.

Our child-genius main character, Rose, invents one robot as a toddler and another as a tween/teen and infuses her view of the world at that age into each, which you can imagine is quite different as she grows and matures. Having raised three kids who are now all grown up, this resonated with me a lot and I think it will resonate with others as well, regardless of age. Apart from that, the audience will love watching giant robots and kaijus beat the crap out of each other along with great characters and lots of fun and funny moments in every episode.

Jared: The kids we’ve shown it to so far have all loved it. It’s got something for boys and girls, and parents feel a sense of nostalgia watching it because its reminiscent of cartoons we used to watch growing up. I hope the audience loves watching the sibling rivalry of Shiny and Thunder play out on the world’s biggest stage with everything on the line. It’s high stakes and very funny and our heroine is a genius young girl who invented giant robots to save the planet. I hope she’s an inspiration to kids to go out and make something cool.

Super Giant Robot Brothers is now streaming on Netflix. Watch it here! The first episode is also available to watch in full on YouTube.