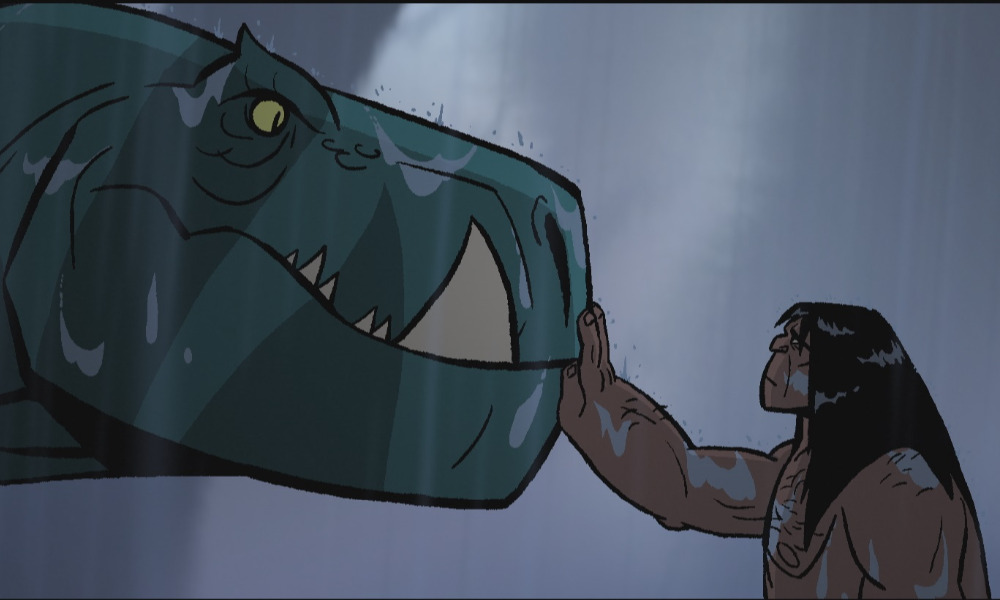 ***This interview was conducted for the upcoming August ’22 issue of Animation Magazine (No. 322)*** 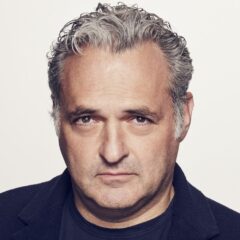 When Genndy Tartakovsky’s five-time Emmy-winning series Primal premiered on Adult Swim block in 2019, fans and critics alike were dazzled by its poetic beauty and stunningly powerful animation. The dialog-free show, which follows the engrossing and at times brutal adventures of a Neanderthal man and his Tyrannosaurus companion, has been universally lauded for its perfect storytelling, beautiful imagery and striking 2D animation.

This summer, we have the pleasure of returning to the world of Spear and Fang as they meet new adversaries and face even more heartbreaking challenges. Tartakovsky (Dexter’s Laboratory, Samurai Jack, Hotel Transylvania), who recently signed an exclusive multi-year overall deal with Cartoon Network and Warner Bros. Animation, was kind enough to answer a few of our questions about the new season of Primal and more:

Animation Magazine: So, first of all, congrats on delivering another magnificent season of Primal. Can you take us back to when you started working on this second season? What were your goals?

Genndy Tartakovsky: We started on the second season right after we were finishing the first one, around October of 2019. We continue to work with our overseas partner, Studio La Cachette [Love, Death + Robots: Sucker of Souls, Mune: Guardian of the Moon]. I had always kind of planned out the story for our second season, but in the beginning it was more cliché. I didn’t think it was good, so we redid it and came up with a storyline that was much more exciting and different. I think it will catch everybody by surprise. One great thing about the new season is that we explore one giant narrative.

What would you say were your biggest challenges as you set out to expand the world of Spear and Fang?

Well, the scale was a lot bigger this season. Fortunately, since I’ve been doing it for over 30 years, I have a little more say about how long the schedule should be, so they gave us more time to make the show and more freedom to deliver it at the right pace. We have our art director Scott Wills, designer Stephen DeStefano, character designer Erika Worthylake, producer Shareena Carlson, color stylist Roger Webb, background artist Christian Schellewald. I did most of the storyboards, along with David Krentz. And then, there’s the team at La Cachette in Paris.

We use TVPaint. It really changed my life. When La Cachette sends up the layout, I can just open the file, make the corrections, label it and then send it right back. Before this, I used to have to get things xeroxed or get frame grabs. This way, animation is at my fingertips. We can really spend the time and make it all better along the way. So great not to have to deal with exposure sheets which were so time consuming! You can really fine-tune things and get more nuanced today.

Why do you think the show has attracted such a huge fan base?

Well, first of all, I think it’s beautiful to look at. Ever since I saw Scott Wills’ paintings, even before Samurai Jack, I couldn’t take my eyes off of them. They were very special and really artistic. In terms of story, we really tried to focus on the relationship between Spear and Fang. It’s never just violence for the sake of having it. We could easily have gone in that direction, but we really wanted to focus on the relationship. That’s why there was a big exploration of the relationship between a man and a beast — or “dog,” however you want to look at it. It’s very accessible and simple.

Exactly. Tell us a little bit about how interesting it is to explore a dialog-free format?

Well, we have a few words in the second season, but it’s still not English, so it’s almost like they’re not talking. It’s been the biggest surprise for me to realize how much more you are drawn in and focused because they’re not talking. My biggest fear in the beginning days was that the show would be too much like an independent movie. But now, I feel like we’ve connected with the audience the same way as a regular show. It’s more about how. You really feel the visuals.

Are there any plans to release Primal Season 2 theatrically, like the first season?

Well, the second season is 10 episodes long, so that would be a very long movie. But maybe someone could do a two-hour cut version of it!

In June, you offered a work-in-progress session at Annecy for your upcoming show Unicorn: Warriors Eternal. Can you tell us a little bit about that series?

It’s a show for HBO Max and it’s basically about these heroes who are reborn through time to fight this evil. Our main characters are reborn as teenagers, so it’s a metaphor for young people coming into their own and becoming an adult. They have these memory fragments of their powers. The show is a steampunk, magical mystery-action-comedy-drama. We don’t know yet whether it will be ready this fall or maybe next year. We are working with the same team at Studio La Cachette again. It’s completely different from Primal. I feel just as Primal was my evolution in the action and visual storytelling format, Unicorn explores the comedy and action genres and also has a very strong emotional and dramatic component.

Finally, what’s your take on the crazy, fast-changing world of animation in 2022?

As you know, there is so much going on. You feel that everyone was hired last year and you had a hard time staffing shows. Of course, there are all these changes happening now. The name of the company has changed, from Hanna Barbera to Cartoon Network to Warner Bros. and AT&T and Discovery. We’ve been through this multiple times, and we’re just strapped in for the ride as long as they want us to make shows. I also have the movie Fixed happening at Sony Pictures Animation (about a dog-next-door who is in love with a show dog, and finds out that he is getting neutered in the morning), which is hopefully coming out next summer.

How do you feel about the recent boom in adult animation today?

It seems like right now we’re having a very good moment for adult animation, especially in Europe. I think it’s really starting to break away from The Simpsons/Family Guy mold. Back when I was 18, my friends and I were hoping for more adult animated projects and now I feel that we are finally seeing the fruition of all those dreams. We are seeing this growth and move forward in that artistic direction.

Genndy Tartakovsky’s Primal premieres on Adult Swim on July 21 at midnight and on HBO Max the next day.