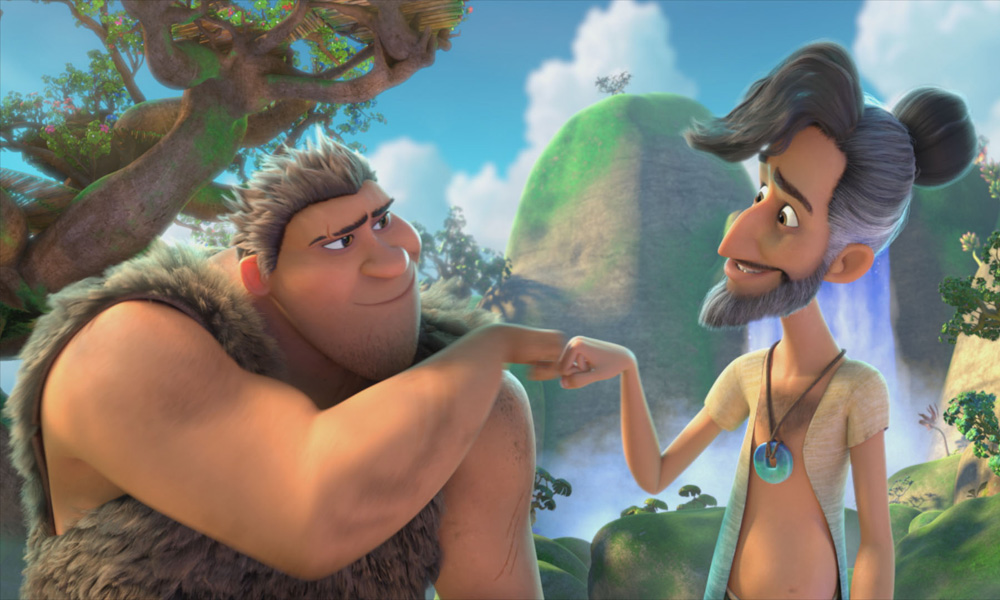 Fans of DreamWorks Animation’s hilarious prehistoric family were thrilled to see the arrival of the new series The Croods: Family Tree on Peacock and Hulu. The six-episode show continues the ever-evolving story of the Croods and the Bettermans (who were introduced in last year’s feature The Croods: A New Age) as they learn to live together on the most idyllic farm in prehistory. The journey from sparring rivals to unlikely friends is fraught with hilarious misadventures as the two families slowly overcome their differences to turn a tree house divided into a tree home united. 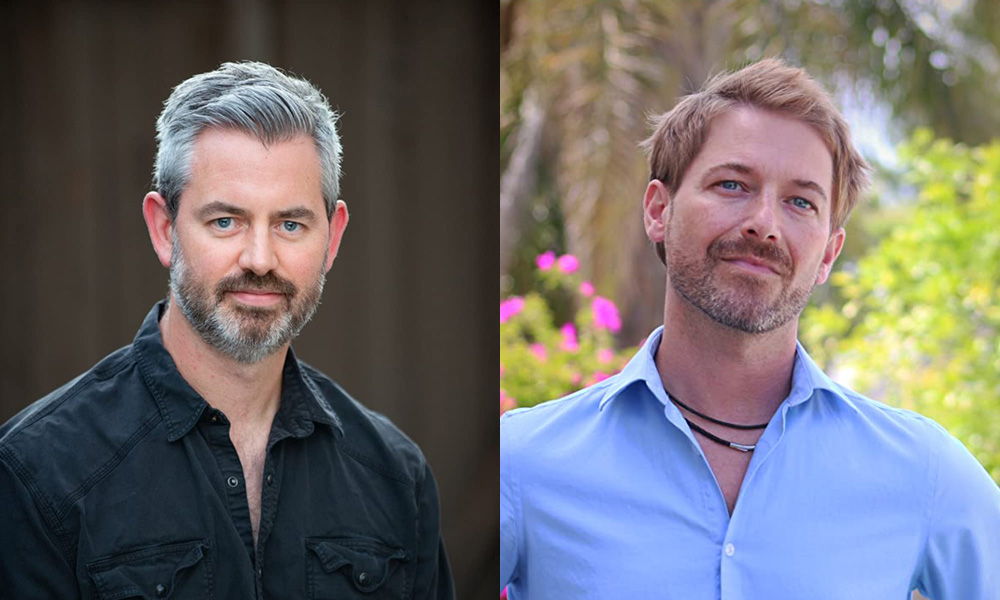 Animag: Can you tell us a little bit about how you got involved with the new show?

Mark Banker: After we wrapped up writing on The Epic Tales of Captain Underpants at DreamWorks, I was hired to work on Go, Dog. Go!, a DreamWorks co-production with WildBrain. Six months later we were deep into writing the first season of GDG when I got a call from Peter Gal, Chief Creative Officer at DreamWorks Animation. He asked if I’d be interested in working on a new Croods series that would pick up right after the upcoming Croods sequel. The first Croods movie was awesome so it was a very easy yes. A week later I saw a rough cut of the Croods sequel. The next week I pitched how I’d approach the series. And a month later I was working on the pilot script for The Croods: Family Tree. It’s possible I lobbied for Motley Croods as a title. But, for some reason, that didn’t stick.

Todd Grimes: I was producing a show at DreamWorks called The Epic Tales of Captain Underpants during the time of development on The Croods: Family Tree. The executives approached me about possibly joining the production on the new show as they thought my style and sensibilities would be a good fit for the comedy of the Croods world. My family and I all love the Croods franchise for its comedy, adventure, and heart, so I was very excited to be a part of this show. I may have also done a fair amount of pleading with the executives to get the job! 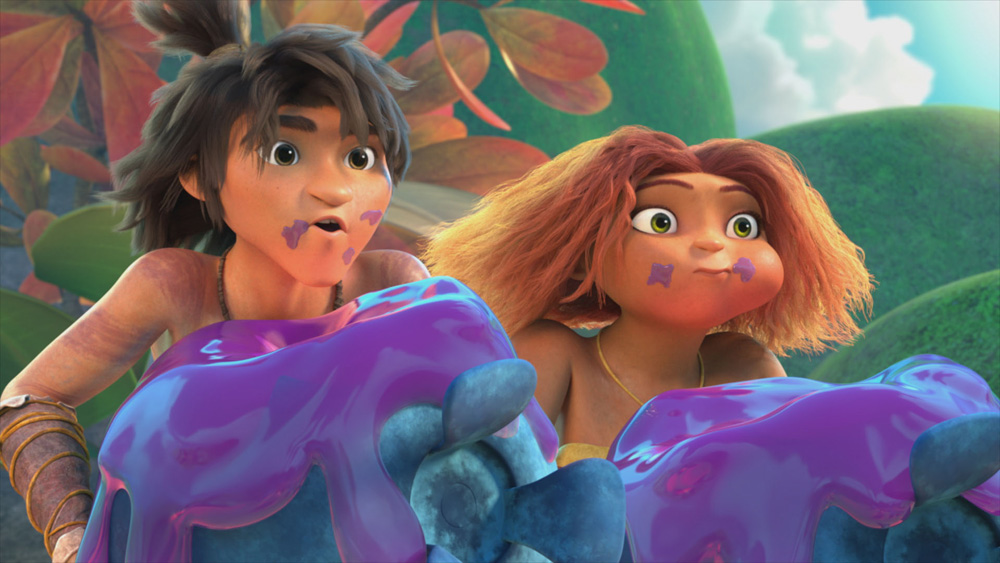 What do you like about this new incarnation of the Croods family?

Mark: In this series, the Croods are in uncharted territory. The tree house, the farm, the Bettermans and a more evolved way of life are all foreign to the Croods. So the Croods are completely out of their comfort zone. As are the Bettermans: They haven’t lived in caves or with others for a long time. That means two mismatched families must navigate the unknown and figure out how to co-exist every single day. It’s uncomfortable, unpredictable and an unlimited source of fun.

Todd: I really like the concept of people coming together even when they have very disparate points of view. In this new incarnation of the Croods we have the addition of the Betterman family who were introduced in the feature film The Croods: A New Age. There’s a great message in seeing how people can learn from one another through respect and compromise. Also, there’s a lot of comedy you can mine from two very different families trying to live and work together despite their differences! It’s like the Conner family moving in with Frasier Crane! 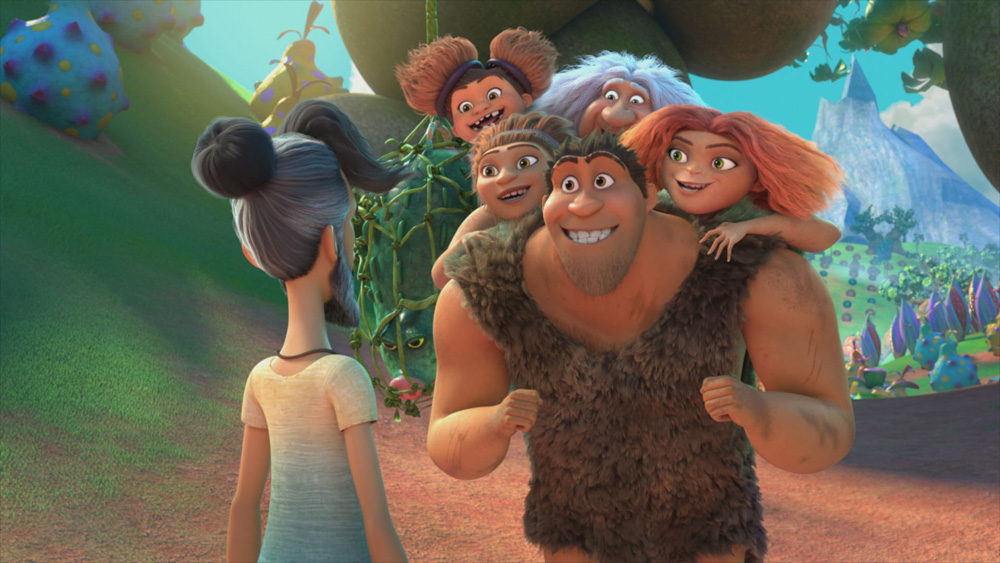 When did you start working on the show and where is the animation produced?

Mark: I started in November 2019. The animation is produced by DreamWorks Animation in Los Angeles, along with our awesome partner studios DAVE in Australia and Technicolor in India. Over 200 people worked on the show (between DreamWorks, DAVE and Technicolor).

Which animation tools are used to create the animation?

Todd: We primarily use Maya for the CG animation. The show also has a component of 2D animated sequences (in most episodes) which are primarily animated in After Effects. 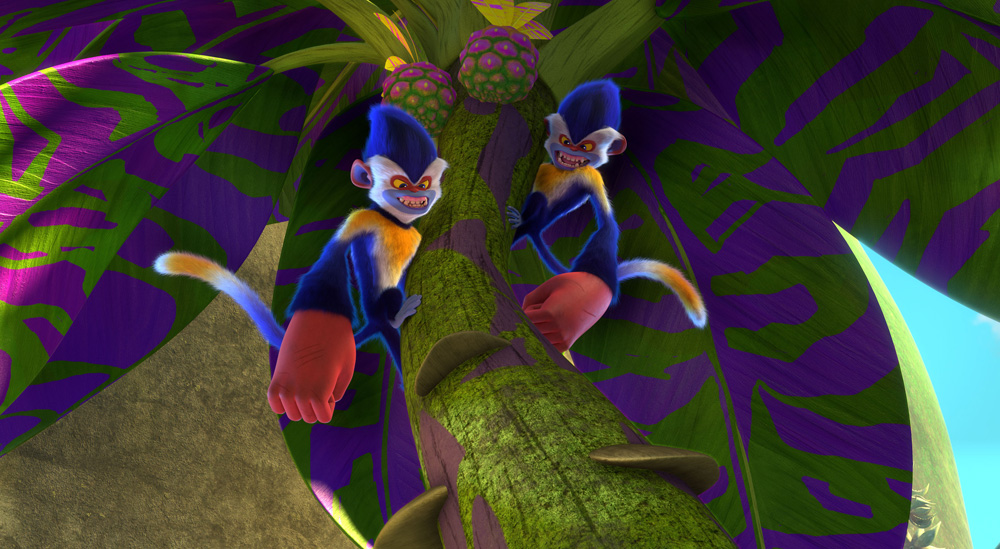 What was the biggest challenge in bringing the new adventures of this prehistoric family to life in a new animated show?

Mark: The biggest challenge would have to be that our crew left our DreamWorks offices on March 12, 2020 — and most of us have been working from home ever since. All the writing, directing, drawing, designing, painting, acting, recording, editing, color correcting, sound mixing and everything else that goes into producing an animated show have been done via WiFi (or ethernet cable for those with not-so-great WiFi). We had to figure out a remote production model on the fly. And, amazingly, it worked. Thanks largely to the incredible dedication, talent and hard work of every person working on this show. And video conference meetings. So many video conference meetings. Compared to that, bridging the vast divide between Grug and Phil, soothing Gran’s primal rage and even getting Thunk off the couch are a breeze.

Todd: It’s always challenging to create a show with the level of detail that The Croods: Family Tree has on a television schedule and budget. We wanted the show to feel as visually stunning as the feature films do, which takes a fair amount of creative thinking. Our team on the show has done an amazing job of making that happen and the result is breathtaking. Every episode is not only funny and heartwarming, but also gorgeous! 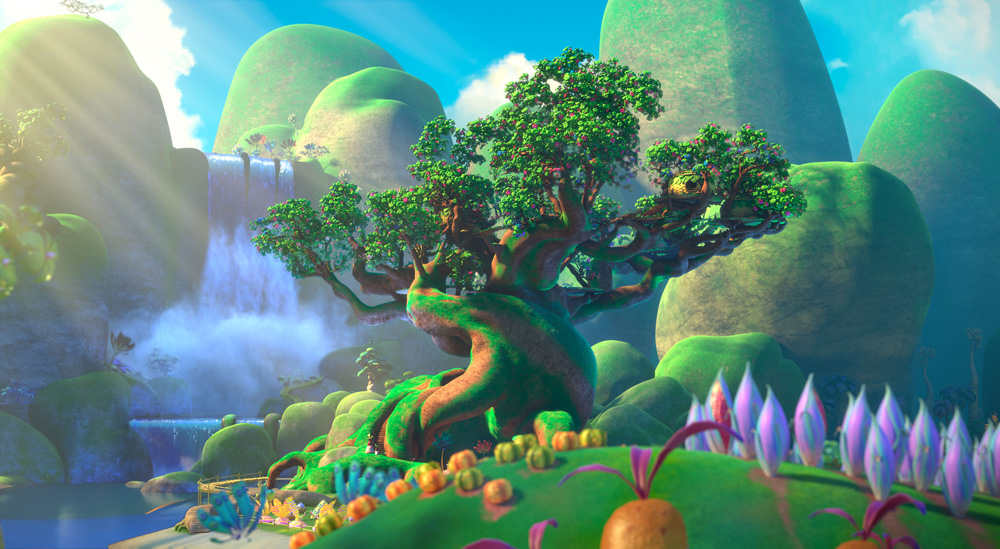 What do you love about the new show?

Mark: Everything. It looks and sounds amazing. The action sequences are thrilling and cinematic. The music is unique and sublime. The cast dunks on every line. It’s genuinely funny. And perhaps the most pleasant surprise of all is the heart. The show has real emotional moments that move you and stay with you. I couldn’t be prouder of how it turned out.

Todd: Aside from the fun stories and hilarious comedy, I would say getting the opportunity to work with fellow executive producer Mark Banker again. As a writer, Mark really understands the importance of story and character. We want the show to have meaningful stories and relationships that go beyond just writing jokes, and Mark and the writing team have done a great job creating moments that are not only funny but also endearing. Watching Croods: Family Tree, you will not only laugh throughout, but you may occasionally even shed a tear! Like the show’s title, a large component of our writing is “family” — and as a father of three myself, I can very much relate to our stories! 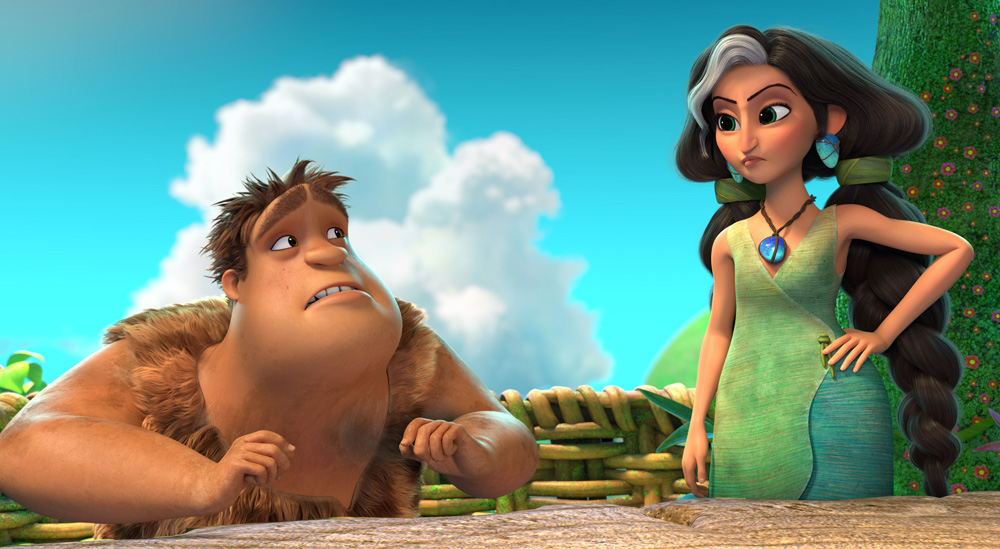 What are your biggest animation influences?

Mark: I rarely missed Saturday morning cartoons as a kid. If it was a cartoon and it was on Saturday morning, I watched it. Obviously Looney Tunes; most of what I know about opera I learned from Bugs Bunny. Flintstones, Jetsons, Super Friends, Laff-A-Lympics, Spider-Man and His Amazing Friends, Dungeons & Dragons, G.I. Joe, Transformers, Muppet Babies, The Smurfs, The Snorks, The Real Ghostbusters, Mr. T and on and on. That said, Thundarr the Barbarian remains my favorite childhood cartoon. Later on, The Simpsons was, of course, a game changer. So was Toy Story. And Venture Bros. And Rick and Morty is glorious — the episode “Pickle Rick” should be taught in schools.

Todd: I grew up in the “Saturday morning cartoon” era so I was initially influenced by shows like Super Friends, Thundarr the Barbarian and Jonny Quest. It was the Disney “renaissance” of the ’80s and ’90s that really made me realize that this was what I wanted to do as a career, with films like The Little Mermaid, Beauty and the Beast, Aladdin and Lion King. Some other big influences for me as I began my career were shows like Batman: The Animated Series and early CG films like Toy Story and Shrek. 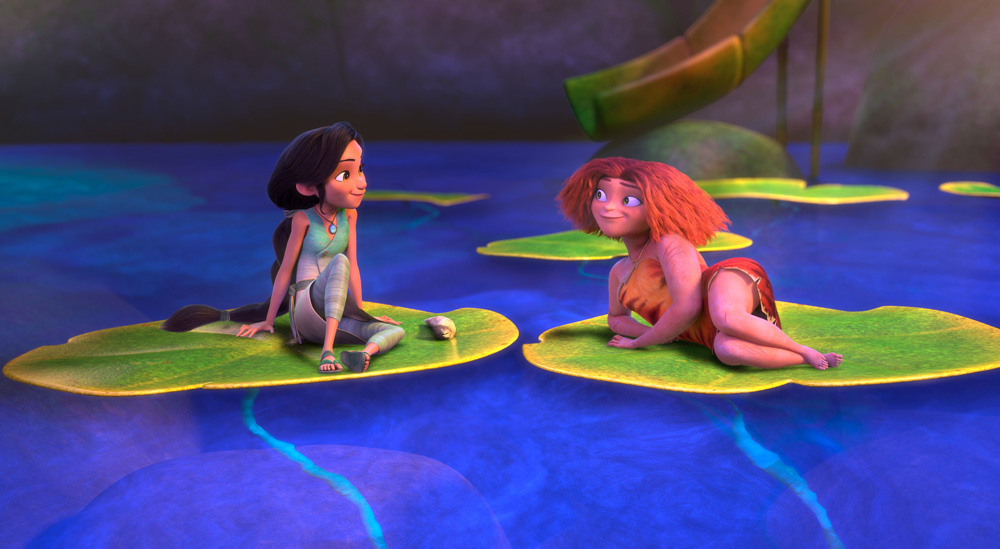 What do you hope audiences will take away from your series?

Mark: A feeling that life is just a little bit brighter for having watched it.

Todd: I hope people feel a sense of optimism and togetherness from our show. The world has become so divided in many ways, and the show is like a prehistoric allegory for what’s happening now. We as people are all in this together so if the Croods and the Betterman’s can find common ground to live and love together, I like to think humanity can as well. There is always hope for the future!

The first six episodes of The Croods: Family Tree are available to stream on Peacock and Hulu.