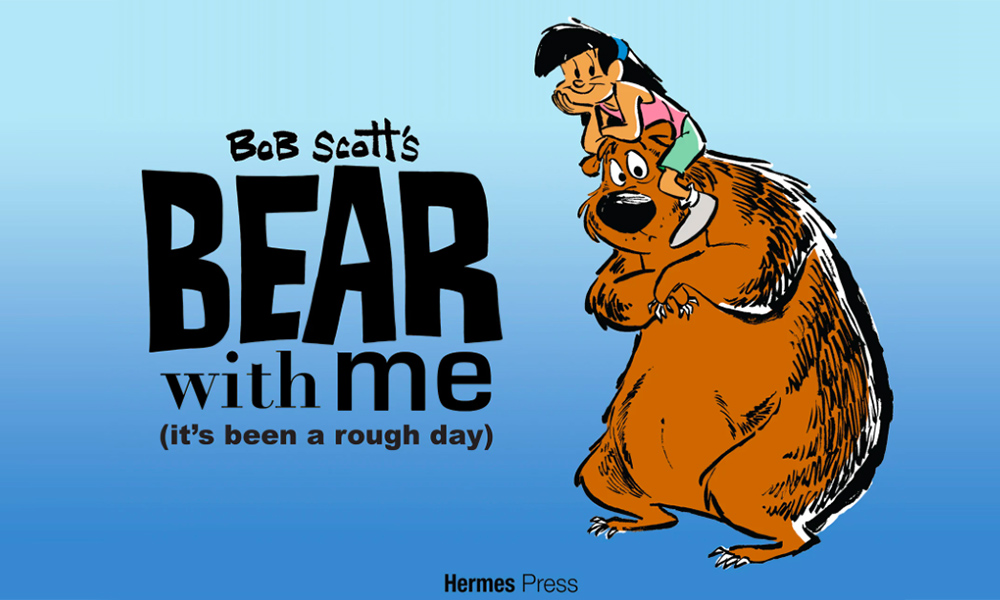 Bob Scott has had an amazing career in animation, working on a wide range of features, as supervising animator on Prince of Egypt and The Road to El Dorado, story artist on Ralph Breaks the Internet, Penguins of Madagascar and Monsters Inc and animator on The Incredibles, WALL•E and Toy Story 3, to name a few. But he is also the prolific comic-strip artist behind the popular, syndicated webcomic Bear With Me (a.k.a. Molly and the Bear). In January, a new collection of his work will be published by Hermès Press, featuring a foreword by Jim Davis (Garfield). Bob was kind enough to answer a few of our questions about his new book and animation career:

Animation Magazine: Congrats on your upcoming book. What made you decide to pursue your own comic strips?

Bob Scott: I always have trouble answering that question: It’s almost like asking a child, “When did you decide to go outside and play with your friends?” It just happens. People just do what they love without a conscious decision. Drawing comic strips is like that for me. I’ve been drawing comic strips since I was a small child. I couldn’t animate when I was eight — there was too much equipment I didn’t have — but I could draw strips on typing paper!

The world of animation has changed so much over the past 20 years. What do you love about it today?

Well, to faithfully answer that question, I have to admit that I mourn the passing of hand-drawn animation. I got into the field to animate, and I am lucky to have had as long of a run as I had (An American Tail through Prince of Egypt), but I miss making the drawings move.

But as a story artist, I do love storyboarding on a Cintiq in Photoshop. It’s way better than all those paper panels tacked to boards. I am able to reduce or enlarge characters or backgrounds to get a composition that works so much quicker. I can get rid of mistakes with Command-Z instead of ending the day with an overflowing trash can. I also like pitching my boards to the director on the computer. By tapping through the boards one panel at a time, I can control the director’s focus and keep them from looking ahead or getting stuck on a panel while I am pitching. It’s a more accurate representation of how the movie will look. I love it. 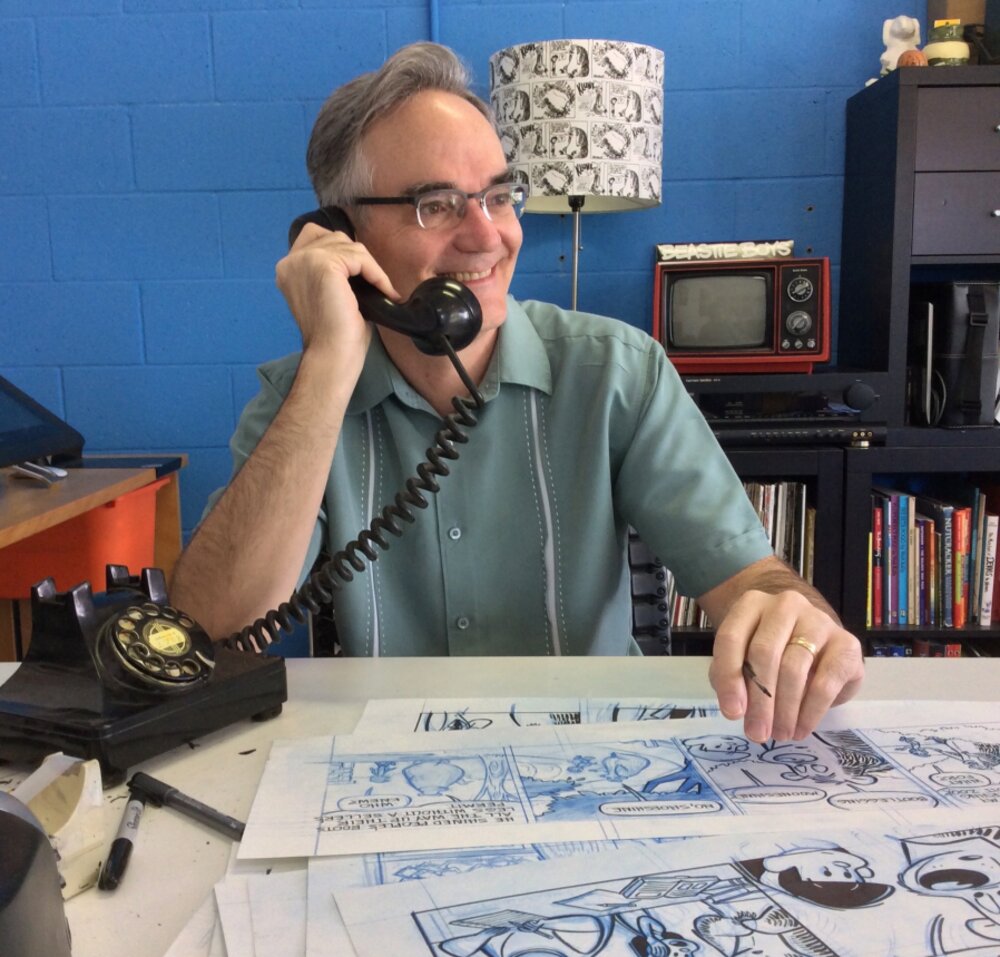 Do you miss working on big studio features?

Other than a short stint in television on the Tom and Jerry Show I’ve been on nothing but features since around 1993. Due to at least one merger and a bunch of reasons beyond my pay grade, a lot of features I’ve been on have not made it to screen. So, do I miss working on big studio features? No, but I do miss seeing them finished! But seriously, I actually enjoy working at the smaller studios. There is a lot more room for creativity and lots more contact with the directors. For the last two years I’ve been working on a new all-animated Garfield feature. My two loves, animation and comic strips, rolled into one. I’m in heaven!

But features such as An American Tail, Cats Don’t Dance, Prince of Egypt — I miss those projects a lot. Working alongside so many animators, wow. It was great to be on the teams. As a kid I dreamed of a career of working on the Warner Brothers cartoon shorts of the ’40s, ’50s and ’60s, and I was lucky enough to animate on the Bugs Bunny short Box Office Bunny in 1990. Shorts are just fun. At Pixar, I loved animating on the 2D shorts Your Friend the Rat and Day and Night. I miss pure, cartoony animation.

We think your new book collection is a great holiday gift for animation lovers!

Thanks for the plug! Ha! Ha! Because I’m from animation, I draw like an animator. Animation fans will enjoy the nods to animation I tuck into the strip. Who else might like my book? I think folks who enjoy traditional newspaper comic strips will enjoy the book. And people who like the idea of living with a pretty confused bear. And people who like to laugh. So that’s everyone, right?

Can you tell us a bit about the daily joys/challenges of creating a strip?

I am syndicated on the web so it’s a lot of instant gratification. In a matter of just a few hours I can have a finished piece of art and it can be read by thousands within the day. I also like that I am completely in charge of the strip. Animation is a collaborative art, but creating Bear With Me is solo work. It is a great release for me. But mostly it is an activity I love. The drawing, the inking, the lettering. I do it all on paper. Plus, I enjoy making myself laugh and then sharing it with others.

What is the best piece of advice you can offer newbies who want to get into animation?

Don’t let anyone tell you that you can’t make a living doing what you love. Draw all the time and most of all, enjoy yourself. You’ll find a way to work in this business somehow.

For all things Molly and the Bear, including strip archives and how to buy the new Bear With Me book, visit mollyandthebear.com. 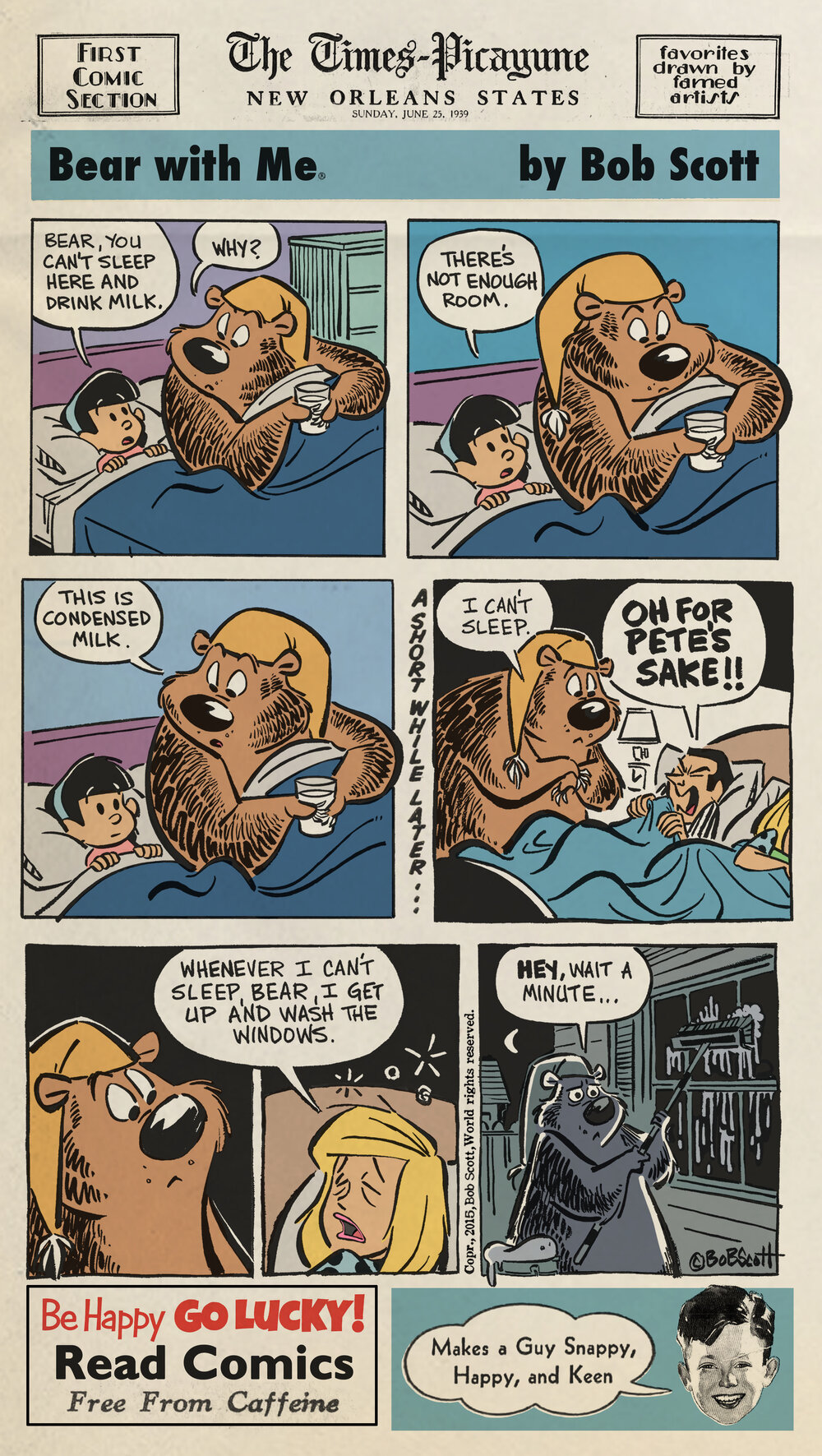