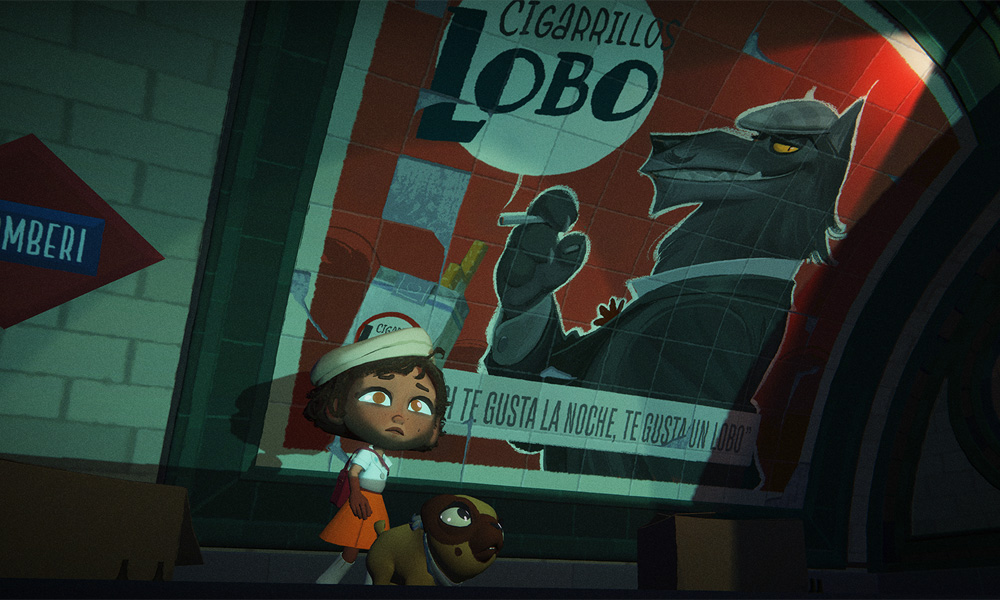 The creative new VR project Madrid Noir, which is featured in the immersive sections at Annecy and the Tribeca Film Festival this year, is a 45-minute experience which puts the players in the shoes of a detective, helping the characters to solve puzzles and hopefully save the day! Developed by No Ghost and produced by Atlas V, the short is directed by James Castillo and written by Castillo, Lawrence Bennett and Lydia Rynne, with production design by Juancho Crespo and animated direction by Aziz Kocanaogullari . Set against the charming city of Madrid, the plot centers on a disenchanted young woman who arrives in the apartment of his estranged uncle who has been declared dead. She is soon compelled to dig into her memories and try to piece together the puzzles of the past. We caught up with Castillo to find out more about this intriguing VR offering:

Animation Magazine: Hello, James. Can you tell us a little bit about the origins for your VR project?

James Castillo: Hello, it’s an absolute pleasure to be able to talk with you about Madrid Noir. We pretty much hit the ground running! Back in 2017 I met the No Ghost team in Annecy (very fitting). We were all very ambitious and wanted to make something unique in VR. I pitched them this idea for a VR short film that involved an old detective, a thief and a little dog staged in a theater play and set in Madrid! They liked it, we got to work for a few months and we ended up with a five-minute “prologue” that would become the foundation for Madrid Noir. That short film ended up winning an award at the Raindance Film Festival and being selected for a few others. This put us on the radar of Atlas V, who soon became our production partners and helped us to start getting in going! 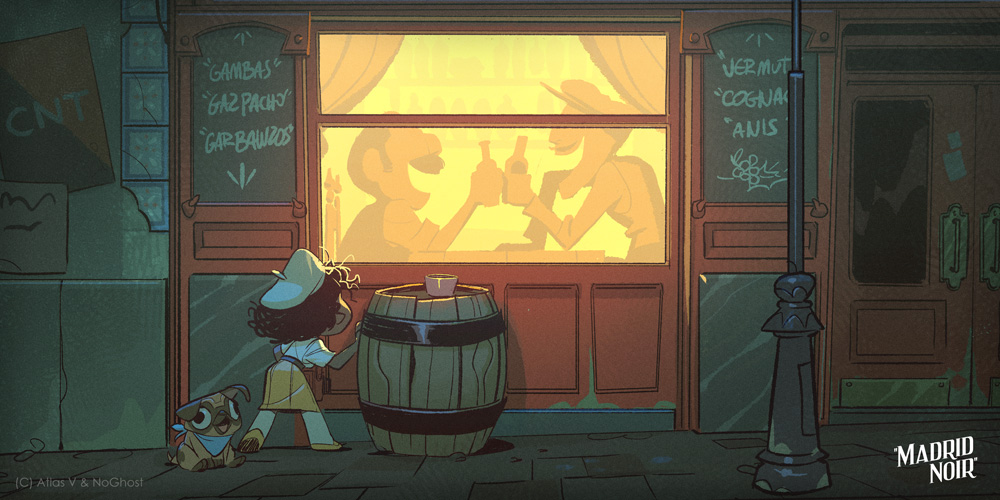 What were the inspirations?

I have always felt that there was a lack of genre films in animation. Lawrence [Bennett, co-writer] and myself have a particular love for classic noir stories. These stories have a very specific tone to them, and holding onto that was key to the project’s development.

We didn’t want to make a deadly serious noir story, it needed to be engaging, soulful and fun, too. Wallace and Gromit (specifically The Wrong Trousers) became a great reference for their perfect balance of sinister and silly. Quickly, other references started to become clear; Charlie Chaplin and Buster Keaton for their mastery of pantomime acting or Hollywood classics like Double Indemnity or The Third Man for their precise use of light and shadow, for example.

We knew that, because of the fact that the player is experiencing the same story from two different timelines (1930s and 1950s) they were going to need someone to guide them, a character that they could root for. A protagonist. That’s where the character of Lola came in, a young woman trying to piece together a fuzzy memory of her childhood. It became a very personal theme, this idea of exploring what time does to a memory and how it affects our identity. 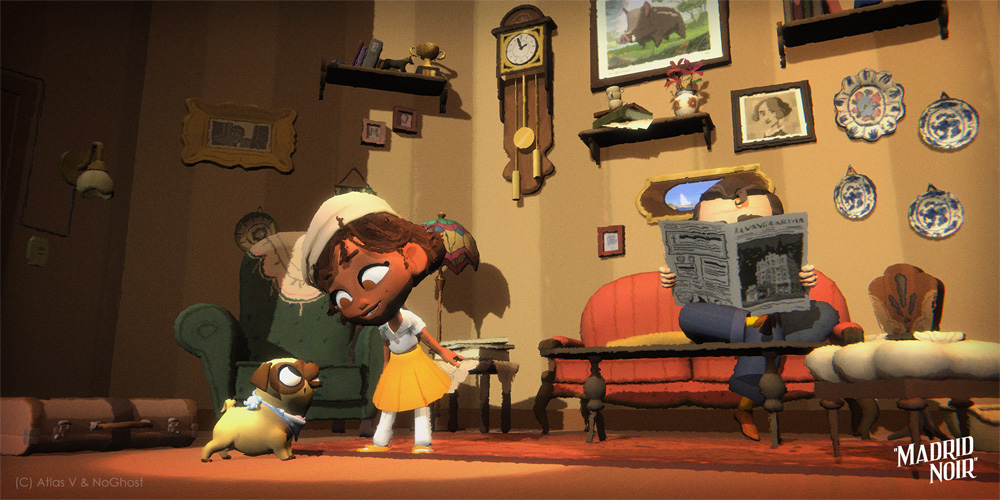 VR is a tricky medium to master. There are numerous difficulties to navigate, from directing the spectator’s eye into the right location, to finding ingenious ways to transition between scenes. For us, it is clear that cinema may not be the best medium to try and translate into VR, there is a vocabulary and a ruleset that just don’t apply in the immersive space. Theater, on the other hand, I think has much more in common with VR. The physicality, that being in the same space as the actors, is the most striking similarity for me. Using theatre as a reference also gave us a way to tackle the artistic choices, lighting, set design, acting, costume, etc. We could always look at the theater for answers.

The last pillar of inspiration was Madrid, the city. I am a Madrid native but have been living abroad for a decade at this point. Around the time I was developing the idea for the project, I was travelling to Madrid frequently and started falling in love with its specificity and unique charm. It’s something that happens to all immigrants, I think — rediscovering the city you grew up in. If I was going to tell a story, I felt I should set it in a place that I knew, that felt personal to me. It also turned out to add an intriguing element to the project, since Madrid has not been portrayed many times in the media. 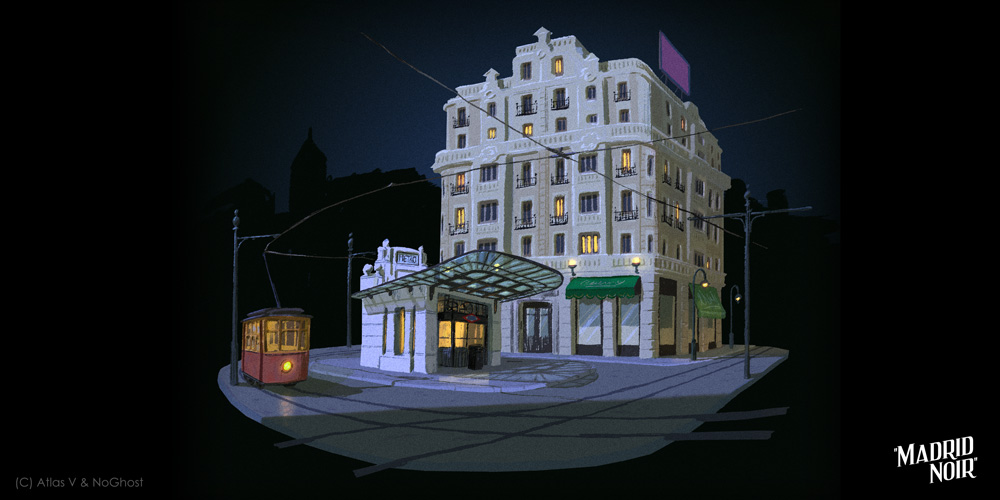 Where was the animation produced and which tools did you use?

We tried to keep most of the production in house, No Ghost’s offices are located in London, U.K., which also happens to be a city brimming with animation talent. Our animation director Aziz Kocanaogullari brought an amazing voice to the project, solving one of my biggest fears: how to balance a straight, soulful performance in this pantomime-inspired world. Thanks to him we managed to attract some of the top talent in London. A hefty chunk of the animation was also completed by Albyon, our production partner in Lyon, France.

As far as tools, the entire project is done using No Ghost’s custom pipeline and build of Unreal, that both link through Autodesk Maya. Our CG supervisor, Tom Flavelle, created a way to build lightweight character rigs that could drive all the character performance, whilst our developers, wrote a custom vertex animation tool so we could animate transitions between scenes in code. Other than that, the production pipeline runs as any other animated production would, with the exception of having to plan a lot of the shots as One Takes. Since there are no cuts, the characters in Madrid Noir go on for minutes at a time (just like in theater) so we had to find clever ways to break that into “chunks” for the animators to be able to approach easily. 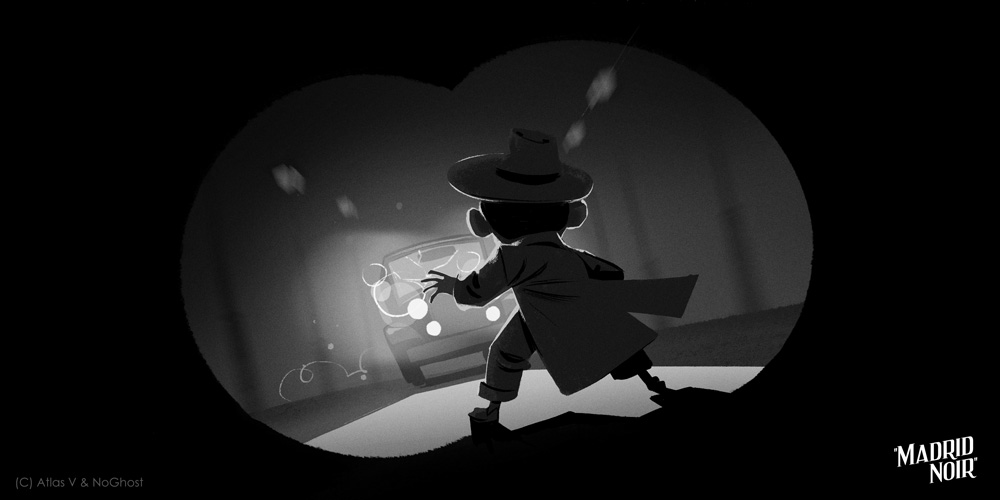 How many people worked on the project and what was your ballpark budget?

I believe at our biggest, we had almost 40 people working on the project. That includes animators, modelers, writers, designers, producers, texture artists, sound designers, music composers, etc. It was by far the grandest production No Ghost had ever done. The budget kept morphing as the production grew, we were very lucky to have Oculus supporting us, which added some “prestige” to the project and made finding finance from other sources much easier. These included CNC (France), Creative XR (U.K.) and Epic Games (U.S.A.), so the project kept scaling up as the budget allowed.

We started talking about Madrid Noir over four years ago now! It’s a long road to try and build a project from the ground up and I think you may just need a bit of luck, too! If we are talking about “live” production, we started in January 2020, just before COVID hit, and we are now at the very last stretch of the process, so around 18 months total.

What would you say were your biggest challenges?

I think everyone in the team, and probably everyone who has been working under these conditions, would agree that our biggest challenge has been having to work through COVID. The pandemic hit three months into production, we were ready to scale up our offices, bought the equipment, and suddenly we were not allowed to be there. So for pretty much the entirety of the production every member of the team has had to work from home, which makes it very hard to solve creative knots and keep people motivated. Nonetheless, our team knocked it out of the park and managed to deliver a fantastic experience, which I will forever be grateful for.

No Ghost provided an immense amount of ingenuity and seamless flexibility to adapt to a virtual production.

On a more technical side, there are a lot of limitations to take into consideration while working in VR, especially for a headset like the Oculus Quest, which runs on relatively limited mobile hardware. To maintain the high frame rates that you need for VR we had to really squeeze Unreal Engine to give us the results we needed. 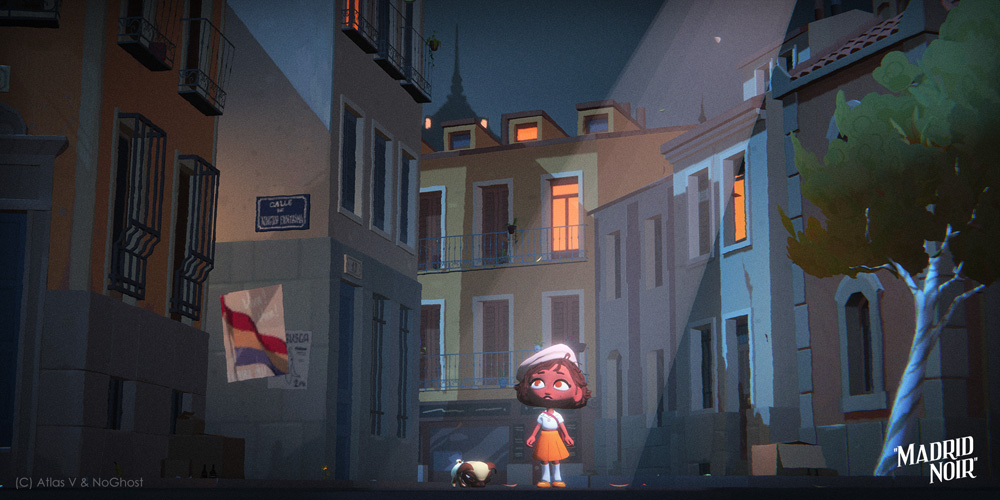 What are you most pleased about this project?

I think we are very proud of the quality we have been able to achieve given the conditions in which this project was made. Our goal was always to be at the highest possible level within the VR animation community and we have surpassed my original expectations.

On a personal level, the little community we have managed to build around the project is quite amazing. Everyone in the team was incredibly invested and gave it 100 percent, which I have to say is a very humbling experience.

What do you hope audiences will take away from your VR project?

We hope animation enthusiasts see a true celebration of the medium and just allow themselves to get lost for a moment in the world we’ve painstakingly crafted.

VR is certainly still a growing market and we hope that projects like Madrid Noir start bridging the gap between traditional animation enthusiasts and interactive mediums. There is a lot of room to grow and discover, and we need more people to be experimenting! 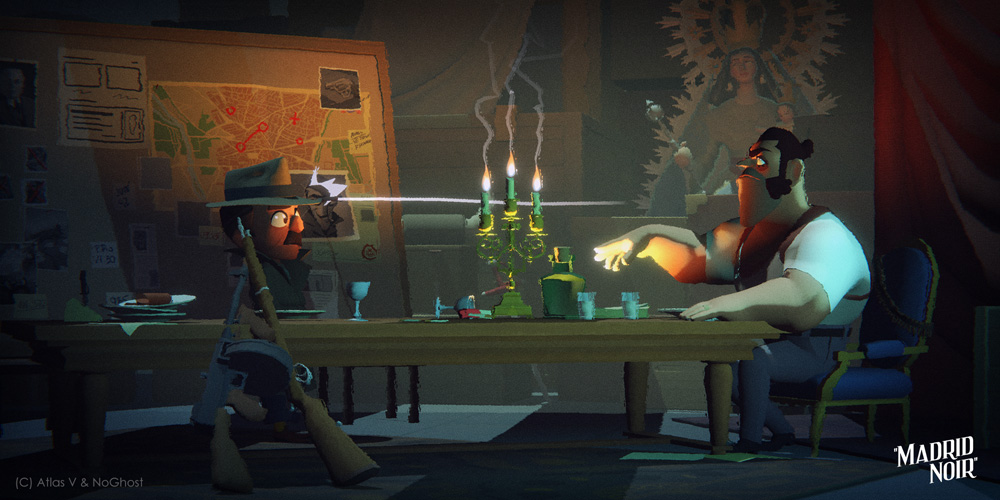 What is your take on the future of animation in the VR field?

I think it’s here to stay. Animation is like water, it gets into every crevice and corner it can, it’s always moving forward and finding a way out. Slowly but surely, animation can be found in so many different industries and, as animation resources become more available, more professionals come out with new and radical ideas.

Already very established studios are developing VR specific teams, and studios like Baobab are putting VR animation in the Annies or the Emmys. As more festivals and brands start kindling the interest for this new technology, animation will start finding a way to grow in VR and hopefully stand on its own and surprise us all with what can be achieved.

What was the biggest lesson you learned during the production of this film ?

As a first-time director, I learned everything on this job! [Laughs] I think something I always thought — but this experience cemented — was the idea that story comes first. In the enormous pyramid that is a production, the story is the base that holds all the weight. We had to make numerous decisions along the way; such as design considerations, technical approaches, marketing and levels of interactivity. At the core of all those questions, there was always the story. How does this choice further the themes? What is the character trying to achieve in this scene? And how can we design them so that they best communicate their place in the story? 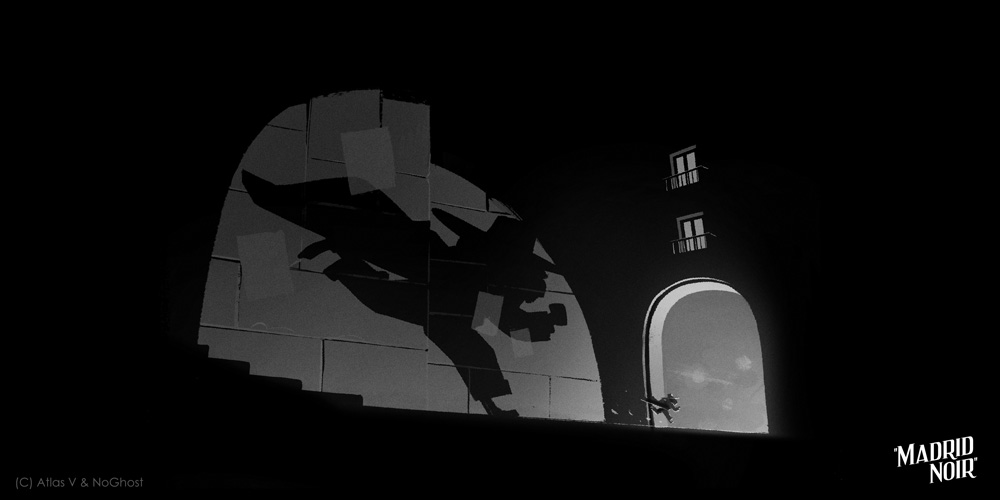 We knew from the start that this project was going to be big, so we were very anxious to start early, because it felt like we didn’t have enough time. Driven by blind excitement we rushed through the first few iterations of the story, we couldn’t wait to get our hands dirty and start seeing progress on the headset. Very quickly we started hitting some walls in production and we realized that there were still some unanswered questions in the story, which caused us to go back and approach it from a new perspective, ultimately making the script stronger.

Who are your biggest animation/VR heroes?

I mentioned before, but this project would not exist without Google Spotlight. They were the pioneers that showed us how animation and VR could be combined to tell stories in a completely new way. Pearl (Patrick Osborne) and Age of Sail (John Kahrs) have a special place in my heart. Thanks again for the interview.

You can learn more about Madrid Noir at www.madridnoir.com. 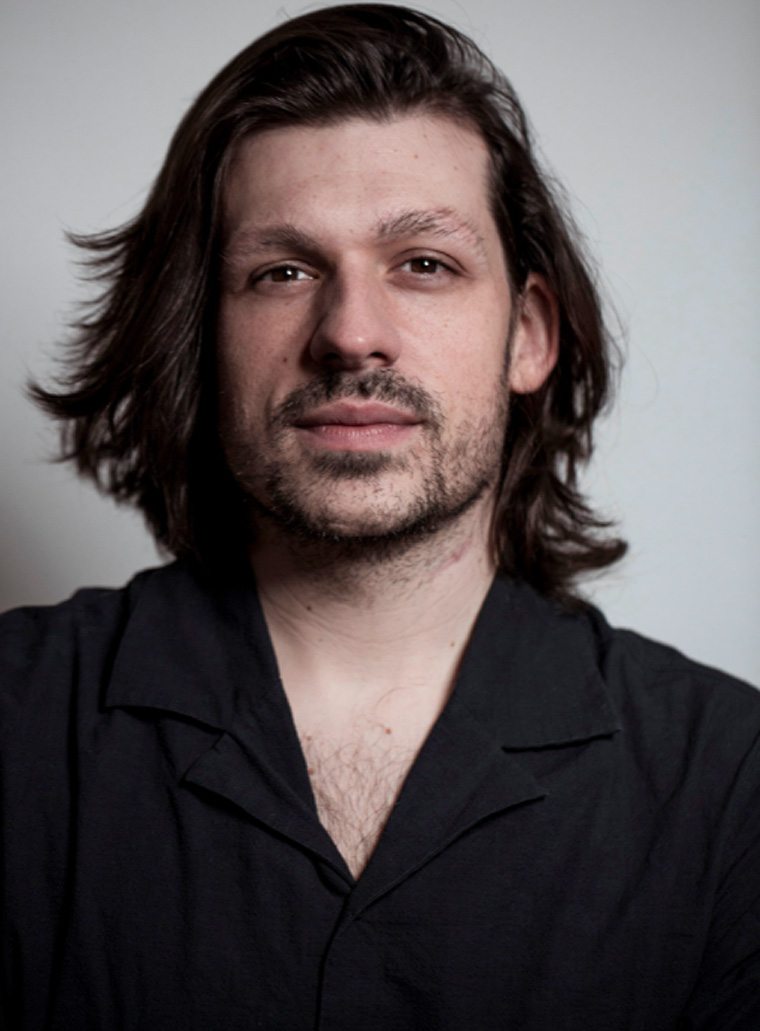