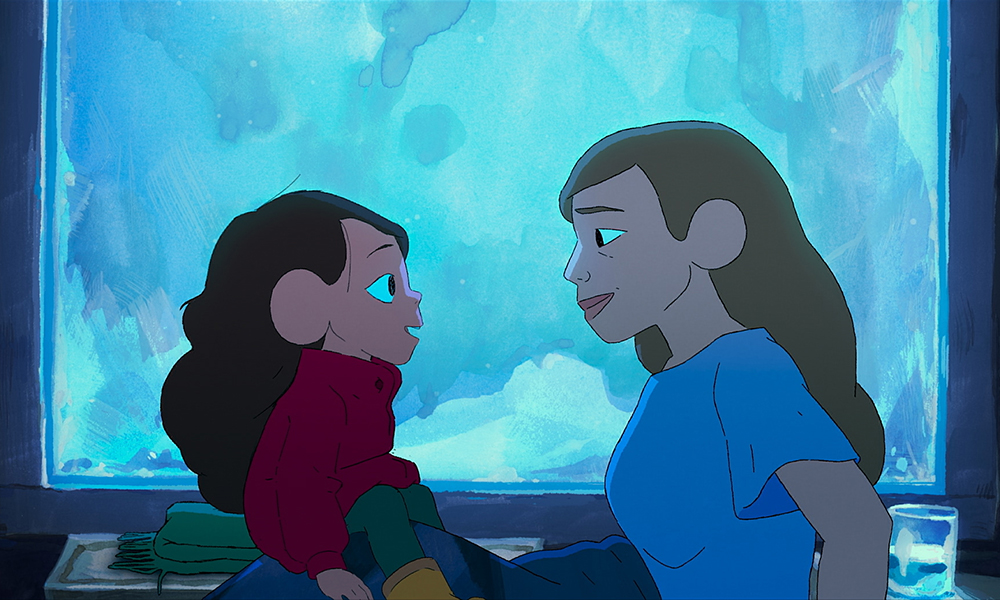 Hugo de Faucompret’s animated short Mum Is Pouring Rain (Maman Pleut des Cordes) centers on a young girl whose mother is battling depression. When she’s sent to her grandmother’s house for the holidays, she meets new friends and inspires her mother to get back on her feet again. The well-crafted 2D-animated (with watercolor-painted backgrounds) short won Annecy’s Jury Prize for Best TV Special as well as the top prize at Rhode Island’s Flickers Festival and is now eligible for Oscar consideration. The director was kind enough to answer a few of our questions about his charming project:

Animation Magazine: Can you tell us how you came up with the idea for this project?

Hugo de Faucompret: I was interested in telling the story of an everyday-life, strong little girl (Jane) facing the twisted world of adults — in this case, her mother’s depression. A girl that adapts to what’s happening around her but is too young to understand the complexity of the situation. My goal was to tackle this subject and show that it shouldn’t be taboo, because so many families go through this sort of phase. I also wanted to develop the story through Jane’s eyes and find ways of telling it that are accessible to kids, sometimes more with images than words. 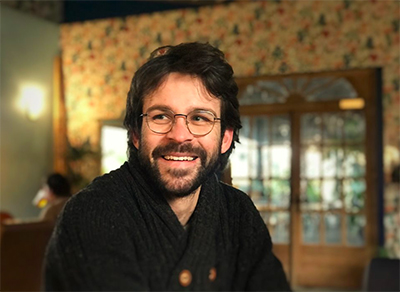 The development of the story and the financing of the film took two to three years, before we could really enter production. At the beginning, it was pretty hard to convince broadcasters that such a story could find its place and audience on TV. During Cartoon Forum, Canal+ jumped on board and it opened the doors to other financial partners.

The whole pre-production and production took us a little bit less than a year, with a wonderful crew of around 60 people working on the film.

Can you talk a bit about the visual style of the short?

One of the first decisions I made was to have hand-painted backgrounds, and to keep this handmade feeling of pencil-scratched lines for the characters, even though they are animated digitally. This is not easy in today’s production reality, but I think it helps give a totally other aspect to a film. I am of course strongly inspired by classical films like those from Disney or Ghibli, or even Grimault’s features in France. But my main inspiration and desire was to recover the feelings from my childhood books, full of weird and magical drawings, such as Claude Ponti’s. Someone I would love to meet one day, by the way. 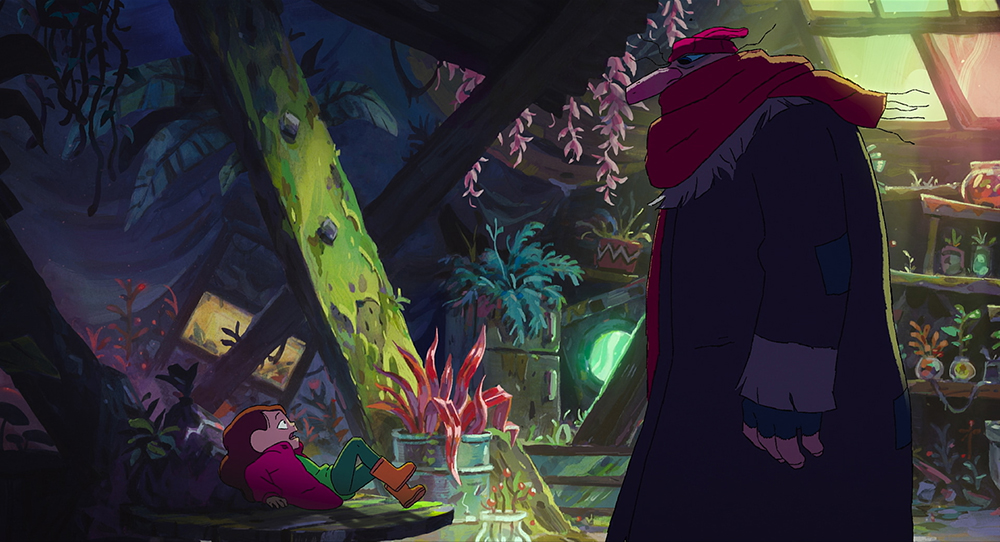 Which animation tools did you use to create the short?

The layouts and the color keys were done in Photoshop. Then the backgrounds were painted with poster color paintings, a sort of fine gouache, on paper and then stitched together, processed and divided into layers back in Photoshop. For the paintings, brushes and paper, we were very lucky to get sponsors from the top Japanese brands: Respectively, Nicker Color, Namura & MUSE, which were the providers of Studio Ghibli as well.

The characters and FX were digitally animated, frame by frame, in TVPaint. And finally, we used After Effects to gather everything from each shot and to add some lights and atmosphere FX such as rain, snow…

What would you say was your biggest challenge on this short?

Without any hesitation: the hand-painted backgrounds, because that’s something we’re not used to doing in today’s productions. We decided to have a limited crew of five painters (me included) to try to make the style remain homogenous throughout the film. Passing on to the rest of the team painting habits that are very personal and usually quite instinctive was a very hard thing to do. And because it’s painting, the training period was quite frustrating and too short for the crew, who sometimes had to start again from scratch after just one little mistake. Dubbing the kids’ characters was also a challenge. We worked with actual kids, among which two were amateurs: my niece, who played Jane, and my cousin, who played Leon. They did their first dubbing on Mum Is Pouring Rain, and now they can’t wait to do it again! 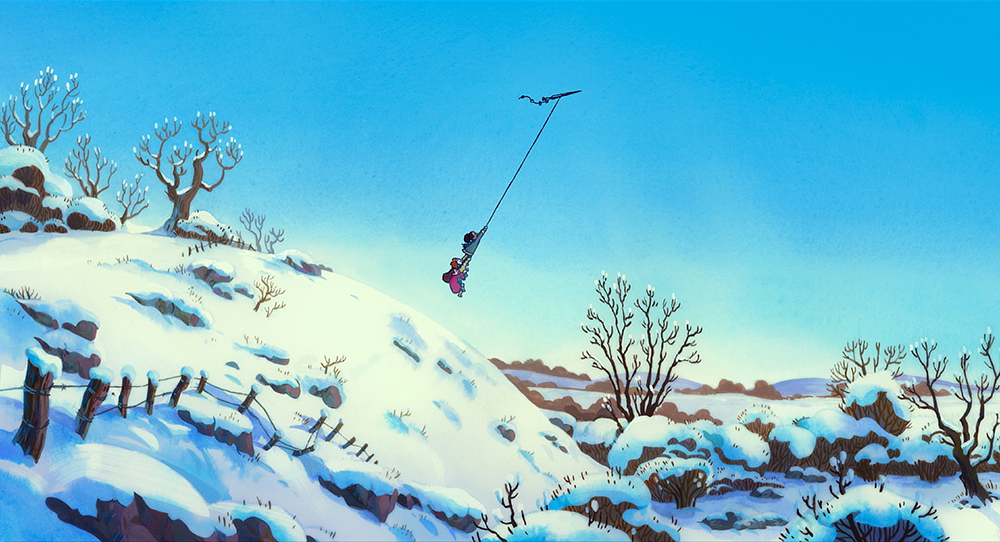 I would say the two exact same things as above, even if it was a wonderful experience on many points — and I think each movie must be challenging, otherwise there is no pleasure or excitement in making it. Ivan Zuber and Antoine Liétout, my two producers from Laïdak Films were really supportive in that way, doing anything they could to ease the process, to find solutions anytime needed.

I hope they will take the best from it. Beyond the topic of depression, the movie is about paying attention to simple things: cooking and sharing a good meal with people you love, reconnecting with them, listening to the nature around, taking time and enjoying it. These feelings are beautifully wrapped around by Pablo Pico’s music in the film. 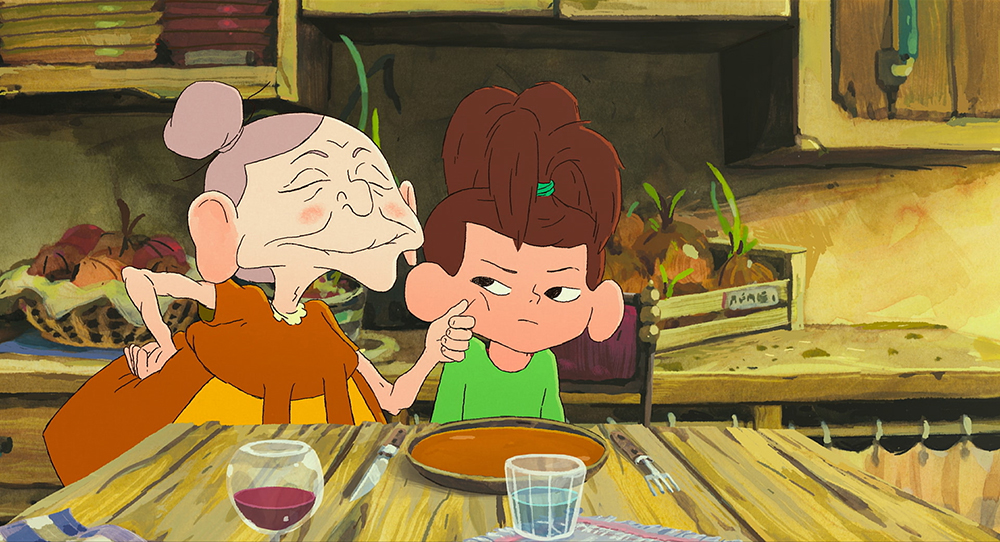 What has been the most memorable or surprising reaction to your short?

Last Thursday, I went to a premiere with around 150 pupils from six to 10 years old in a French cinema. They all laughed together when the giant Cloclo crashes into the snow with his tiny bike. They almost scared me because of how loud they were… And they were clapping hands and moving butts on each musical moment. I’m so glad to have been there that day, with all the teachers trying to shush them in vain. It was priceless!

Teamwork, obviously — and to delegate! A movie is not a single person’s work, it’s the work of a whole team. Each animator, background artist, designer, actor, musician (etc.) brings a piece of this pie we’re trying to cook together, and I think no one wants it to be disgusting. I hope…

My biggest lesson for my next projects would be to keep focusing on creating a good work atmosphere for the team. These projects are such big slices of lives, we really need to make them exciting yet soothing.

You can go behind the scenes of Mum Is Pouring Rain with the Making-of video here, from Laïdak Films. For more info, visit dandelooo.com/en/portfolio/maman-pleut-des-cordes.