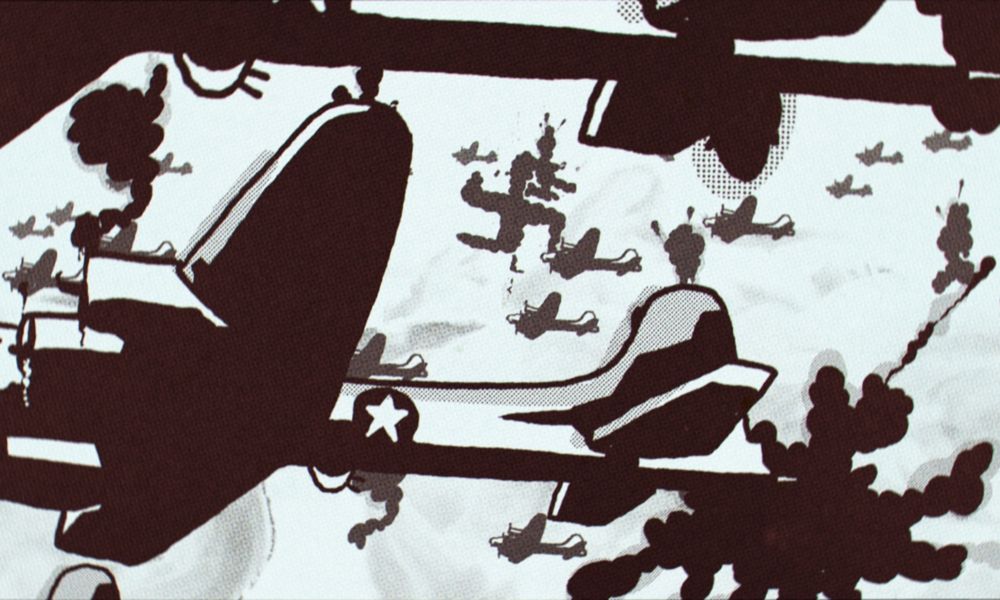 In the winter of 1945, WWII navigator Edward Field was on his third mission when flak crippled his plane and caused it to crash land in the North Sea. The well-regarded writer and poet wrote about this experience and years later, his niece Diane Weis decided to produce an animated short based on her uncle’s amazing experience. She reached out to Polish animator Piotr Kabat and together they created Minor Accident of War, an original 2D-animated short that has been doing quite well on the festival circuit and is one of the shorts qualified to be considered for this year’s Oscar race. Diane and Piotr were kind enough to answer a few of our questions about the film, which you can watch below: 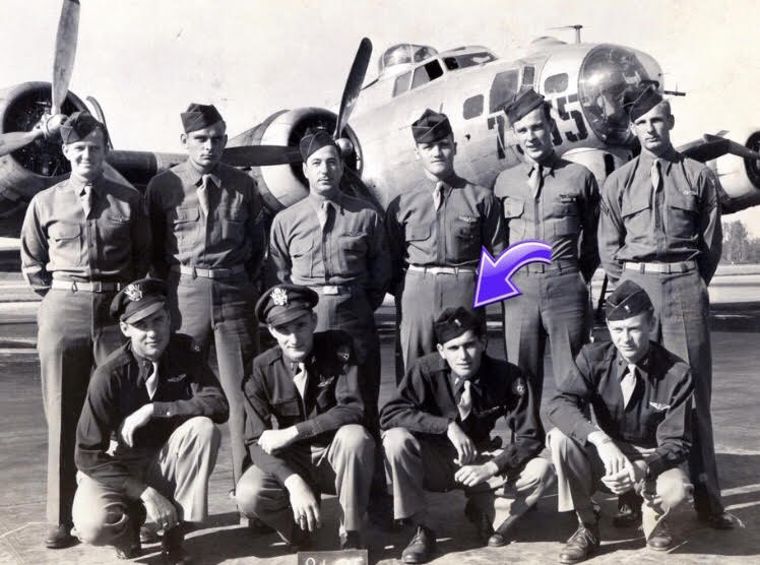 Writer Edward Field with his B-17 crew.

Can you tell us how you came up with the idea to produce this short?

Diane: I was looking for another project and recalled this poem my 96-year-old uncle Edward Field wrote about a particular harrowing mission during WWII. Edward is a renowned poet. I approached him with the idea of adapting it into a short animated film. He loved the idea and was involved in every step of production including narrating the film.

Can you tell us how you found your own animation director?

Diane:  My co-producer David Finch and I asked friends in the industry for recommendations while we searched the internet. After about three months, I happened upon the Vimeo page of Piotr. As soon as I saw his work, I was blown away! It was almost exactly how I envisioned the film but better! So, thanks Vimeo! 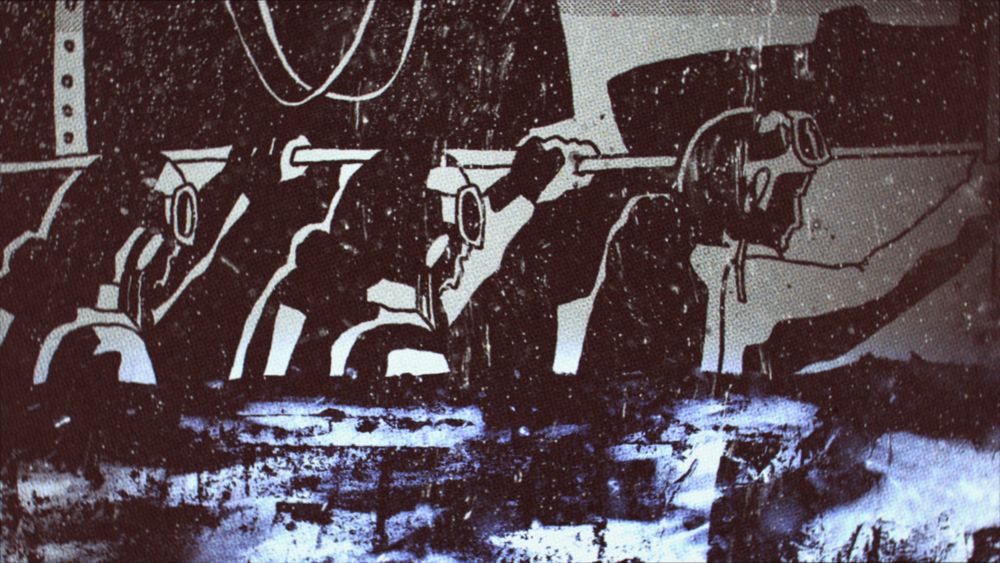 How long did it take you to make it?

Piotr: We worked on quite a tight timeline from around May through October 2019. I started working on storyboards very quickly just after a couple of emails with Diane.

Diane: Yes, it was just several months as once I decided to move forward I wanted to have it completed for the 75th anniversary of the end of the war which was in 2020. Piotr responded so quickly. It was great. The fast turn-around was also due to the fact that we had an incredibly talented and experienced production team including Michal Fojcik (Loving Vincent), composer Alex Gimeno and Alex Kupershmidt, a former associate of mine who is a veteran Disney animator, came on as a consultant. I connected with Cindy Bryan, who is sort of an expert on the 8th Air Force, and she provided valuable information for accuracy. Edward’s grand nephews jumped in, too, Gabriel Weis and Stephen Cyr, assisting with technical aspects. The project was a real labor of love.

Which animation tools did you rely on to produce the short?

Piotr: Basic 2D digital stuff. Pen and paper for initial sketches and design. Photoshop for storyboard, and animation. Then I jumped to After Effects for compositing, color and texture. The editing was done in Premiere. No special plugins or fancy techniques. I tend to use a lot of resources like textures, grain, patterns though. I put multiple layers of that on top of each other. I like to make my work look analog. Even though it’s entirely done digitally. I love the looks and feel of old school art — no matter if it’s film, photography or animation. There’s something special about it. 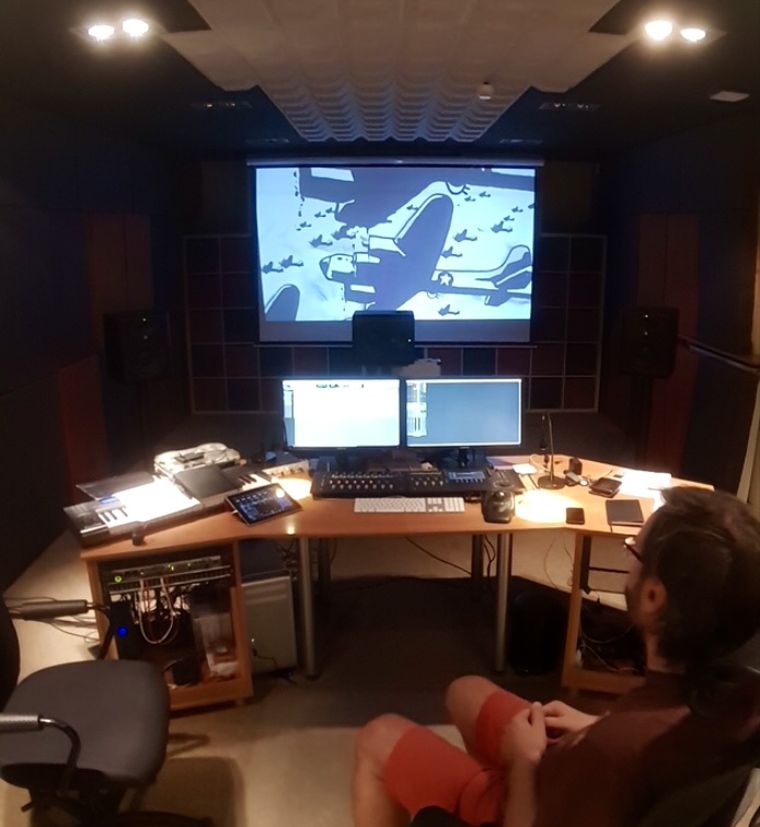 What was the biggest challenge for you as you set out to tell your uncle’s story?

Diane: I would say that although I thought a contemporary style of animation would be great to tell his story to reach a broad audience, when we started work, I became a bit nervous. The film wasn’t meshing like I had hoped — Edward’s narration and Piotr’s animation. It wasn’t until we got the score from our composer, Alex Gimeno, that those fears were allayed. His music just pulled it all together so beautifully.  Then the sound design by Michal Fojcik was coming in and we could see this was going to work wonderfully and be a very dynamic film.

Can you tell us a little about your uncle?

Diane: My uncle is a hero on many fronts. He has overcome so much, is such a survivor and at 96 years of age has such a positive outlook on life. He dealt with terrible anti-Semitic bullying even got beaten up every day on the way to and from school when he was growing up

in Lynbrook, New York. In addition to flying 27 missions during the war and fighting Nazi Germany, he is an icon in LGBT literature and the literary world at large. He has been recognized with so many honors for his writing. It was a dream to collaborate with him on this film. He will be 97 this June and walks a mile a day, albeit with a mask on now, and does yoga daily.

What was his response when he finally saw the finished work?

Diane: He absolutely loved it! He said he got emotional when watching because it was like reliving that experience again. And now that the film is in consideration for an Oscar, he is thrilled. Edward is the writer of the 1966 Academy Award-winning short documentary, To Be Alive. Pretty cool now that 55 years later he is in the Oscar mix again. 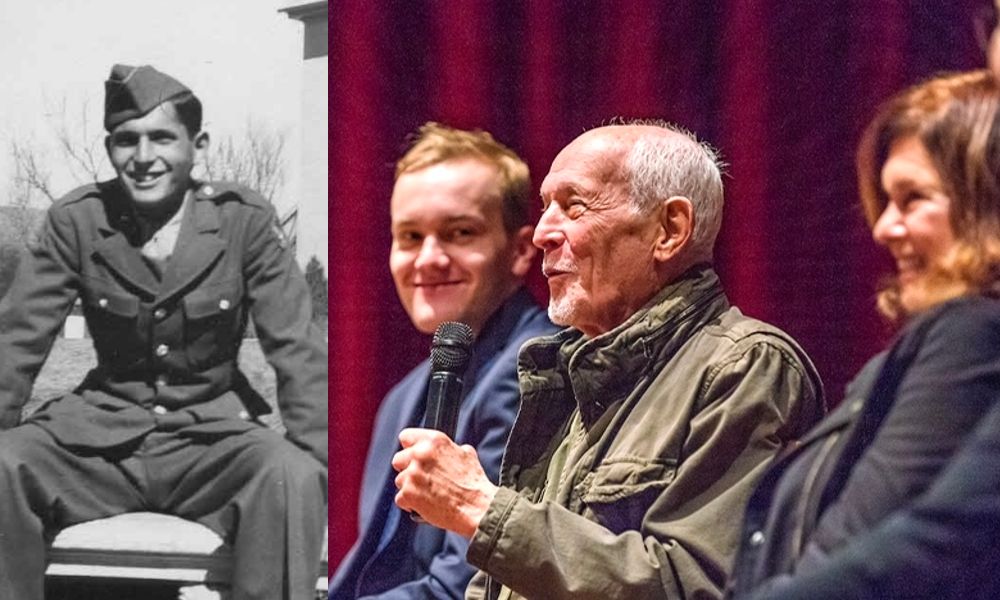 Lt. Edward Field in 1945 (left) and at a recent panel for the film, with Piotr Kabat and Diane Weis.

What kind of budget did you have?

Diane: Very low budget.  But because we had this amazing team of artists who are so dedicated to their crafts and were passionate about this project, they gave 1,000% so the film looks like the budget was bigger than it was. Piotr gave it everything he had. I don’t think he slept during those six months.

What was the biggest lesson you learned from the experience?

Piotr: I must say — the whole project was a really big and nice surprise. Nothing that I had planned. It turned out so good and took me to so many cool places in the U.S., like New Orleans, Sedona and California. It enabled me to meet so many great folks. And now we’re qualified for an Oscar! The biggest lesson from it: You never know what’s around the corner. The most exciting thing in life can happen tomorrow. Just keep on working, put your work out there and good things will come.

Diane: That creating is a process. Projects develop in ways you may not have envisioned at first. So always be open and patient to possibilities. With animation it is so wonderful that if something isn’t working you can almost always figure out a way to make it work. I was lucky to have Alex Kupershmidt by my side, who is so experienced and understands how the animation process works.

Do you have any favorite animation directors? Movies? Shorts?

Piotr: It’s always one of the hardest questions! The list would be just too long to mention everything and everyone. Some of my most formative films: Akira, Heavy Metal, Fear & Loathing in Las Vegas, Army of Darkness, Apocalypse Now, Rejected, Matrix. I finally watched The Mandalorian and it blew my mind!  It’s one of the best things I’ve watched recently.

Diane:  In the animation world, I’m a fan of Tim Burton’s work. Fantasia I would say was a very influential film for me on many levels. And I grew up with Hanna-Barbera cartoons which I still love to watch. As far as shorts, I love Glen Keane and Kobe Bryant’s Dear Basketball and John Kahrs’ Paperman. I am a big fan of Wallace & Gromit, too. I could go on…

Do you have any tips for anyone who would like to embark on a similar venture?

Piotr: Focus on the storytelling. It’s crucial. The tools and medium are just secondary. When you’re done with that, making a film is just finding solutions on the go. Don’t be afraid to jump on something ambitious that you think you can’t handle. There’s always a way to get it done.

Diane: Like Piotr says, the story is key.  Also, there are so many great animators out there who are looking for a chance to work on a film. Explore the internet and don’t be afraid if you find someone on the other side of the world. (Piotr lives in Poland and I live in Los Angeles.) The wonderful thing about animation especially during this trying time with COVID, is that you can work remotely and use Zoom and other conferencing tools to collaborate and communicate.