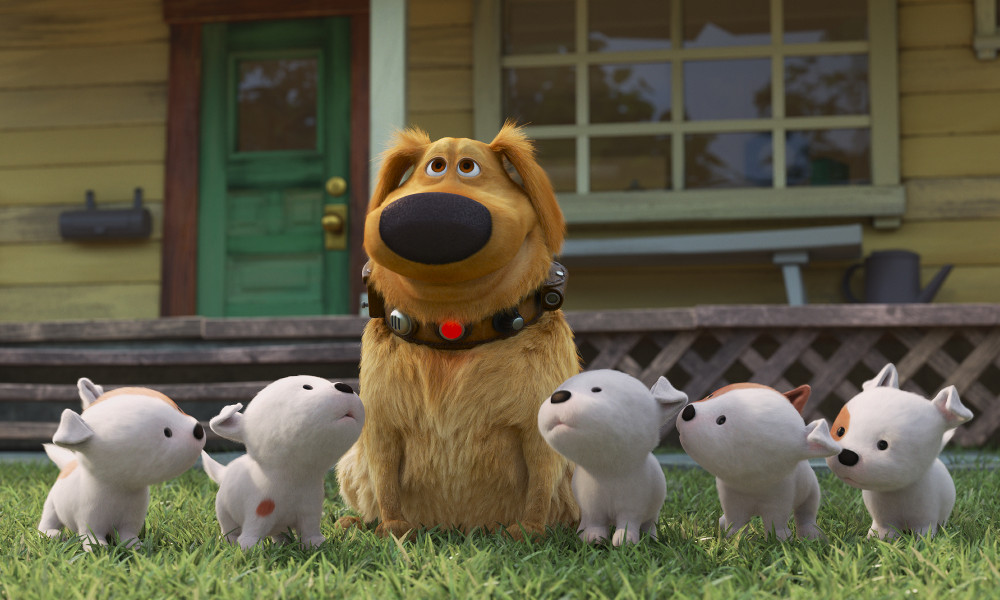 Fans of Pixar’s Oscar-winning 2009 feature Up got a very special gift this Wednesday (Sept. 1) when Disney+ premiered Dug Days, a charming new collection of shorts featuring the movie’s loveable golden retriever. The whimsical, five-episode collection centers on Dug (voiced by writer-director Bob Peterson) as he adjusts to a new life in suburbia with Carl (voiced by the late Ed Asner), watches over the neighbor’s puppies, overcomes a fear of fireworks, saves a house from fire and gets to speaks with the animals in the neighborhood using those special translating collars!

We had a chance to speak with the shorts’ brilliant, Oscar-nominated and Emmy-winning director Bob Peterson (Up, Finding Nemo, Forky Asks a Question) and producer Kim Collins. Here is an abridged version of what they told us:

Thank you for giving us these wonderful little Dug and Carl shorts. It’s so good to see these characters again. Can you tell us a bit about the history of this collection?

Bob Peterson: You know, the original movie had such a great conclusion that we thought it would be hard to generate new drama for these characters. There was nothing that presented itself that felt like it would warrant a sequel at the time. Pete Docter was directing other things. The years went by and I started working on the Forky Asks a Question series and realized that a series of shorts was something that we hadn’t done. We had done single shorts and features, but it was fun to think of a series of shorts. So, after Forky was finished, I pitched an idea of an Up mini-sequel, to see how Carl and Dug are progressing, but to see it all from Dug’s point of view. The goal was to get to see the fun of a dog’s life. We thought that might put a smile on people’s faces. I pitched it about three years ago, and a couple of years ago I wrote them up. Then we storyboarded it, and then the pandemic hit and we had to reshuffle things, but we made it through.

Kim Collins: I came on board after Bob had already written the scripts. So, we had this great blueprint and I felt like we could hit the ground running with these five shorts. 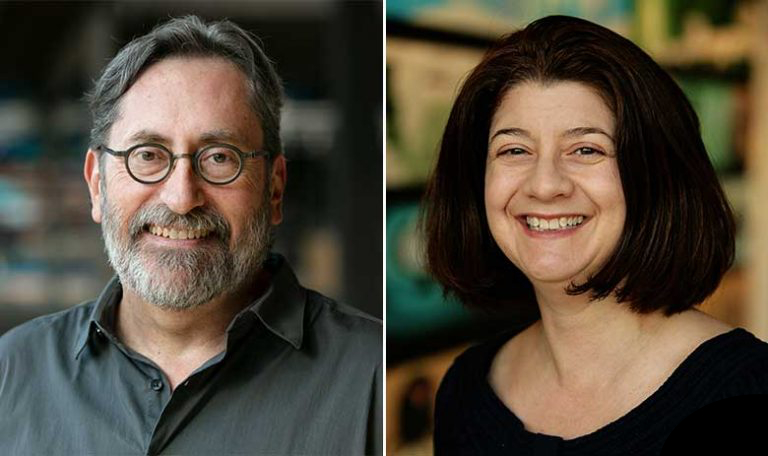 How many people worked on the project and how was it different from planning a big Pixar movie?

Bob: The animation is all produced at Pixar. We had over a hundred people working on it. It’s far fewer people than we’re used to. We only had one story artist per short, so they each got to do their own thing. A six- or seven-minute short is about the length of a sequence in a film.

Kim: Our biggest challenge was the pandemic landing right as we were gearing up and having to pivot. Streaming is new to Pixar, which is a feature film studio and the culture is very feature film-based, although obviously we have done single shorts here and there. For this, we had to move a little faster, the windows to make them are shorter and crews are smaller. Just figuring out how we are going to do it … Our team needed three weeks at least to make sure their internet connection was fast enough to do their work remotely. It was a big pivot that we had to do. During the pandemic we ended up recording [dialog] in a lot of unusual places, mostly closets.

Bob: And this was interesting: Young Jordan Nagai was nine or 10 when he recorded Russel over 10 years ago. And we loved his voice so much that we decided to keep his kid voice. We found old dialogue from Up with the help of our editorial team. So, for example, after I wrote the script for the short “Science,” we went looking for Jordan lines that matched. Some of the found lines, in fact, were actually better than the written lines.

What do you love about these shorts?

Bob: They were a lot of fun. I love dogs and I have always had dogs. These shorts were about  visualizing the reality of a dog, not just what a human would think a dog would do. We wanted people to say, “That looks exactly like what my dog would have done.” That is the best compliment people can give us.

Kim: I love that we got to show the relationship between Carl and Dug — and it’s something that all pet owners can relate to, whether we have a dog or a cat or a hamster. It’s just very universal and a beautiful thing.

Bob: The way Carl and Dug care about each other and take good care of each other, I think it’s a great reminder for us during these times that we’re living through. 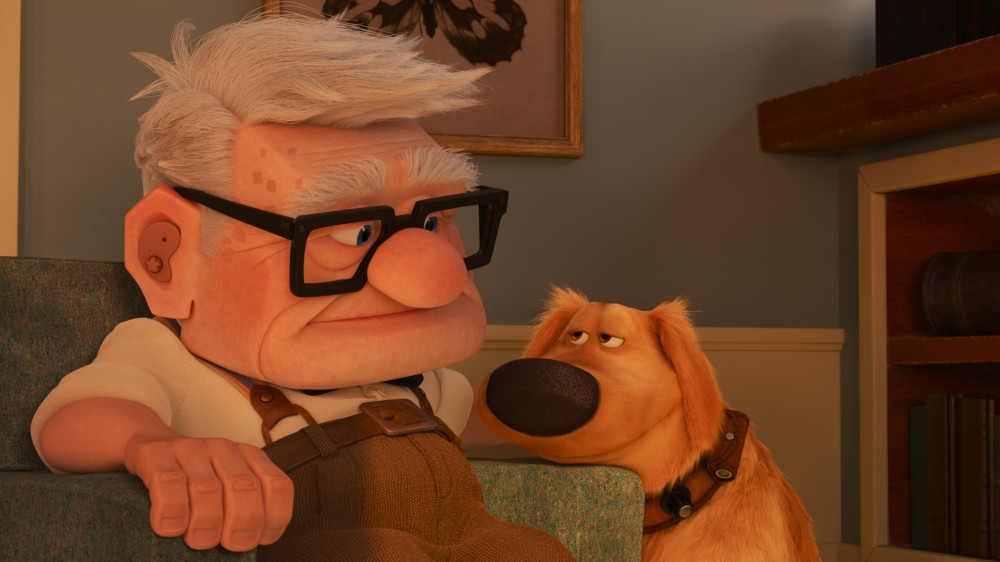 How long did it take for your team to produce these shorts?

Kim: We did them all at once. It took us about 11 months to do 40-some minutes of animation.

What was it like to work with the brilliant Ed Asner again? [Editor’s note: This interview was conducted before Asner’s passing on August 29.]

Bob: Ed is the best. He is 92, and he’s as funny, wonderful and cantankerous as he has ever been. He is just a gentleman to work with. He is Carl Fredricksen and we just love him.

Tell us about the visuals and how the evolution in technology since the movie came out helped you improve the looks of the characters.

Kim: Obviously, the look of Dug Days owes a lot to the look of Up. We looked at the living room we had designed for Carl and Ellie in the movie for inspiration for the designs both inside and outside Carl’s home. It has that oversized, handmade look. We wanted Carl’s home to be different from Carl and Ellie’s home, but it still has an older, nostalgic feel. We followed the same design aesthetic for the entire neighborhood: You can see an oversized tree and the leaves are giant. They’re almost as big as Carl.

Bob: We followed that aesthetic into Carl’s front room. We wanted to have a cozy home for Carl and Dug but also design one which beckons back to Up. So, many of the props in this room have significance for the film — and also our crew is represented in some of the props as well.

Part of our task on Dug Days was to update old characters from Up to work with our present technology. This included creating new textures, hair and animation rigging. And as a character himself, we decided to make Carl just a bit more spry because he had been on an adventure in Up. So, he stands up a bit straighter, doesn’t wear his jacket anymore, and he’s gone crazy with rolled-up shirtsleeves. So — look out, ladies!

Pixar is great about placing Easter eggs in their movies. Can you reveal any of the ones you hid in the Dug shorts?

Kim: In the “Flowers,” episode, there’s a Ferris wheel, which is the same Ferris wheel from Toy Story 4 — and Toy Story 4 was the project that I had worked on just prior to joining Dug Days. So, that’s the one I like the best!

Bob: We have a lot of them in Carl’s room: For example, there is a frog bookend which is actually a model we used back in Up as sort of a ‘nature’s alarm clock’ for Carl. The cool thing about computer graphics is that we can just take that model and reuse it. A lot of the things sort of now represent Carl’s journey. He is now more in tune with nature. He has pinecones and things like that. We’ve also included little Easter eggs about the crew. For example, we have a  camera which has Mark Neilsen’s name on it, and he is our production designer. Another one: Up director Pete Docter is a sweets fanatic, and he just loves macarons. He can eat them morning, noon and night. So, you can find a box of Pete’s macarons in one of the episodes as well! 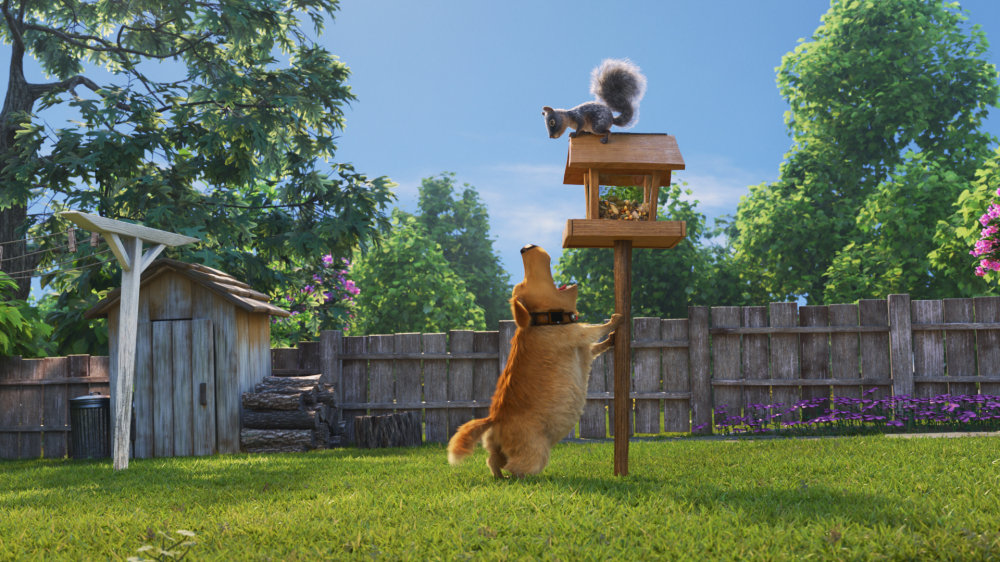 What are your favorite episodes or moments?

Bob: I have two favorites: The fireworks episode is so madcap. It starts so gentle. We lull people into this sort of false sense of security — and then all heck breaks loose. Then, we have the Fantasia-like dream. You just don’t see that coming. But my favorite moment of this series is at the very end in the “Science” episode, the last one where Carl and Dug are in his front room, and Carl is just describing what it’s like to have love for your pet, for your dog; that your dog, you know, protects you and gets you through your day and is your best friend. I mean, we think of our dogs as friends, and that’s my favorite moment in all of these.

Kim: I’m going to echo that. I mean, I love them all. They’re all very different in tone, so they all have different charms. When we first started, the “Science” episode was my favorite. I just love Dug just saying, “Everything can talk.” But the fireworks episode quickly became my favorite as it went through production, because people brought so many amazing ideas to it, just really — we call it “plussing” at Pixar.

Do you remember how you came up with the idea behind Dug’s talking collar originally?

Bob: That goes back to a movie that Pete Docter and I were developing before Up, which was more of a science-fiction story. The dog ate something that it shouldn’t have and, all of a sudden, he started talking. It was just so fun to hear what a dog had to say that when that project got shelved and we moved onto Up, we wondered, well, how can we bring that back?  You know Ellie, Carl’s wife, wanted to go on this adventure as a kid, and we thought, boy, what would she want to see? And we thought: Yes, a talking dog would certainly be part of-a kid’s dream experience. So, Dug actually was born in a different film. But he came into our film and we decided to expand on dogs because of Dug. Some of these things happen, you know, by chance or-they’re just sort of delivered to us, and we don’t really think them through. We embrace them and see what they can bring.

All five Dug Days shorts are currently streaming on Disney+.