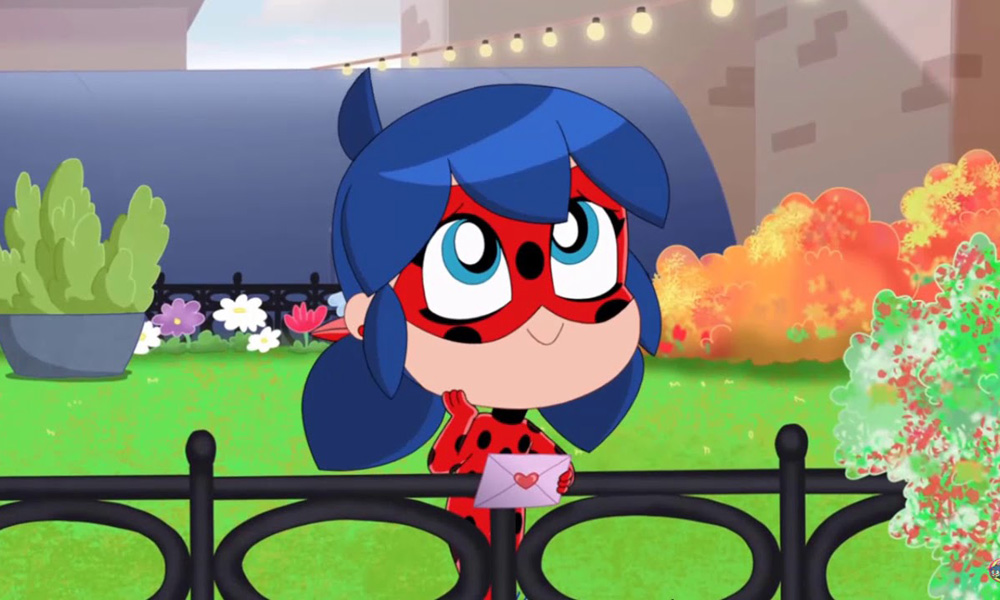 American-Brazilian character designer and illustrator Angie Nasca discusses her current gig at ZAG Entertainment, as the main character designer for the new Miraculous Chibi mini series. Angie studied animation at Columbia College in her hometown of Chicago. She was recruited by studio founder Jeremy Zag in August 2016.

Based on the hit ZAG Heroez animated series Miraculous ® — Tales of Ladybug & Cat Noir, Miraculous Chibi has attracted over 11 million views and garnered 200,000+ subscribers since its worldwide launch on August 31. The new interpretation of the popular characters has also inspired the Miraculous Ladybug King Jr. Meal toys for the recent global Burger King promotion. The original Miraculous series is ranked by Parrot Analytics as the #5 most popular kids’ series across the globe (May to July 2018) and recently won the animated series category at the Teen Choice Awards.

Aside from her work at ZAG, Angie also has a growing Instagram account of more than 240k followers (@angiensca), where she posts original artwork and helps inspire young artists.

Can you tell us a little bit about how you got involved with ZAG and the Chibi project?

I discovered Miraculous before it ever aired in the U.S. and I fell in love with the story and designs. I started drawing fan art for fun, posting on my own Instagram account. I noticed after a while that the CEO of ZAG (Jeremy Zag) began to follow me, and not long after he reached out and offered me a job! I was still in school at the time, but I couldn’t pass up the opportunity to work at ZAG. So, I accepted, and here I am now!

Ever since I started working at ZAG, there was discussion around me designing an individual project for the Miraculous Ladybug franchise. When the idea of Miraculous Chibi was brought to light, there was no question this was the project we’d been waiting for! The entire theme of the series is very cute and has elements of anime to it, so it was a natural fit for my drawing style. I created the character designs early on and have been developing the art ever since.

When did you start working on the series?

I have been a part of the series since the beginning. While Miraculous Chibi was still in the development phase, I designed the two main characters (Ladybug and Cat Noir) as chibis and the series grew from those initial sketches. Jeremy Zag had great commentary and guidance to help me, and I was also lucky enough to work with such a talented team to help develop the series into what it is today.

What are some of your visual sources of inspiration?

I look to a lot of artists on Instagram for inspiration. It’s hard to narrow it down, but a couple of my favorites are @anna_cattish and @chihirohowe. Aside from Instagram, I especially love and am a huge fan of Genndy Tartakovsky’s work (creator of Samurai Jack).

I’m also inspired by my surroundings, especially sunset time on the beach! It’s great that ZAG’s headquarters is based in an area full of creative street art, fashion, and vibrant colors; so if I have a bad art block, I’m able to get back on my feet quickly. The entire vibe always leaves me renewed and inspired!

Why do you think the show is so popular worldwide?

I find the storyline to be super relatable across cultures. Regardless of where you live, the stories about friends, love and figuring out your place in the world are felt by everyone. With a diverse set of characters, no one feels left out when watching the show. I think it’s amazing that Marinette is half Chinese and French, and it feels relevant for the world today. I’m half Brazilian and American, so as someone who is multicultural her character is especially relatable to me.

Since the chibi series is a simplified version of the Miraculous Ladybug characters, it’s exciting to see them designed in a different art style and act sillier than usual – it’s lighthearted fun, which is content that’s loved universally.

What is the biggest challenge for you on this project?

Learning as I go along! Since I did leave school a little early for this role, I’m still perfecting some of the more technical skills of design, beyond character art. Having experience in the real world is much more practical than just theoretically in school. I appreciate the pressure of real deadlines and love the feeling when I learn something new and apply it directly to what I’m working on.

Can you tell us about your creative process? Which tools do you use at work?

Since I’m a digital artist, the Cintiq tablet is my go-to. As for programs, I jump back and forth between Photoshop and Procreate, but usually stick to Photoshop for work-related projects. For concepting, I usually sketch out on paper to clarify my concept, but then I’ll transfer to digital at an early stage and continue to illustrate from there.

I’m flexible during my creative process, but I usually like to be around people for the energy vs. being alone since it’s easy for me to tune out and focus. I also like to listen to music, specifically lo-fi hip-hop, classical and jazz, which help me relax and allow my mind to wander.

What attracted you to the world of animation? Which shows or movies did you love as a kid?

I loved watching Cartoon Network growing up, and especially loved The PowerPuff Girls. I was also a big fan of anime like Pokemon, Tokyo Mew Mew and Studio Ghibli’s Kiki’s Delivery Service. Of course, Disney is iconic, and I remember how much I enjoyed The Emperor’s New Groove as a kid. But the idea of pursuing art as a career hadn’t crossed my mind until I was introduced to Disney’s Tangled and Frozen, which is where I began to truly appreciate the creative process of animation and film.

What kind of advice do you give young people who want to have a solid career in animation?

I’m still learning myself! Based on experience, I will say don’t be afraid to showcase your work, because you never know who will see it. Expect constructive criticism along the way — not everyone will like your work, and that’s okay! But listening to people’s insight and having an open mind about it will help your skills evolve.

Another point I should address is the idea of “art style.” People always ask me how to find their style, and my answer is always the same: it grows with time, practice and patience. An art style doesn’t develop overnight and will never stop evolving, so just enjoy the ride as you go along! My work from two years ago is very different from what I do now, and I see it as visual proof that I’ve improved and am continuing to grow my skills the more I practice!

If you had to pick one, Mickey Mouse or Bugs Bunny — and why?

Bugs Bunny. Both are great, but Looney Tunes is so nostalgic for me. I love the slapstick humor and the whole cartoon-y vibe. I especially appreciate Chuck Jones’s take on Bugs Bunny and the way he’d time his animation to make the characters have even more personality. It’s a true classic in my eyes, and I still love watching it when I have the chance! 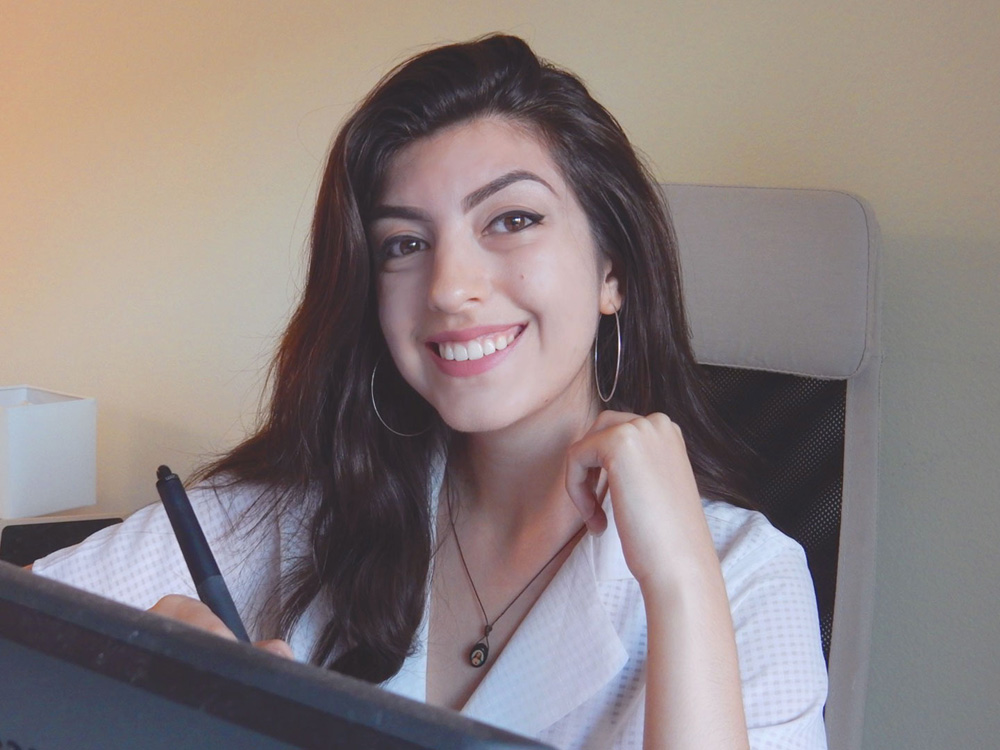 Po Bounces Back in ‘Kung Fu Panda: The Paws of Destiny’
Clip: Mickey Mouse Gets a Big Birthday Surprise in New Short!