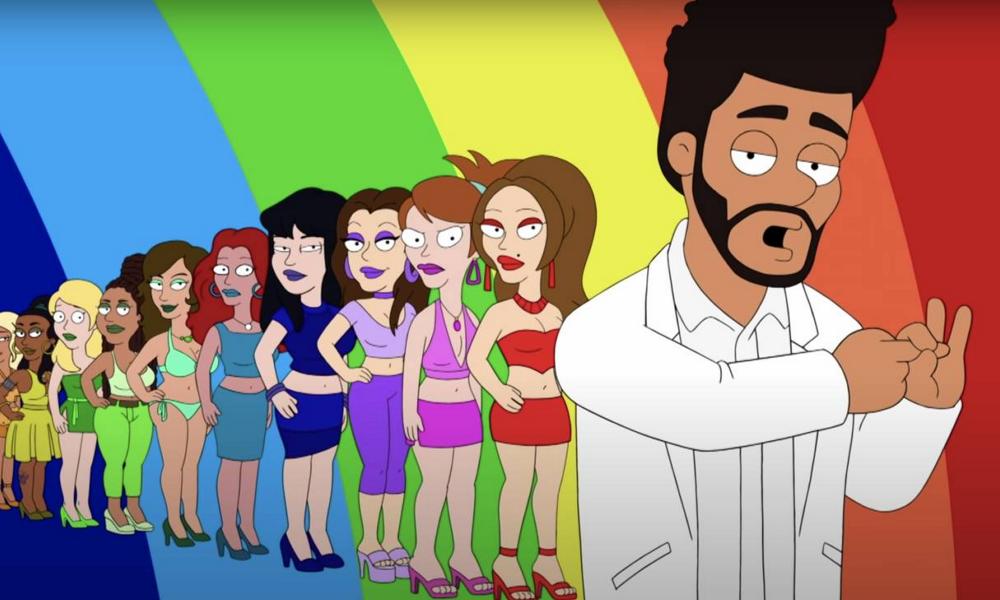 One of the highlights of this past season of TBS’ American Dad! series was the participation of Abel ‘The Weeknd’ Tesfaye, who voiced and co-wrote the May 4 episode “A Starboy Is Born”. We were thrilled when Tesfaye and co-writer Joel Hurwitz answered a few of our questions about this buzzy outing in which Stan abducts The Weeknd to teach Roger a lesson!

We know you’re a big fan of animation. Can you tell us how you ended up collaborating with the American Dad! team?

Tesfaye: All I did on tour was watch American Dad!, so everyone around me was forced to, also.  When my manager Cash met Joel randomly at a party in Las Vegas, he shared, and here we are.

What do you love about the show and animation in general?

I love that it’s the counterpart to Family Guy –– like the cult version of Family Guy, only the jokes are smarter and the storylines are better.

What was the toughest part of writing the episode “A Starboy Is Born”?

I think the toughest part was probably coming up with what my character’s dark secret actually was, and we finally landed on “virgin.”

How did you come up with the song “The Weeknd’s Dark Secret”?

The script informed the concept and the song wrote itself with the help of the talented Asa Taccone [Electric Guest].

What was it like doing the voice for your own character?

I hated it. I actually hated it, because when I think about cartoons you have characters. With Robot Chicken I got to be other characters, so it didn’t point back to me. I’d rather disguise my voice.

You grew up loving animation, right? What were some of your favorites?

I’m a cartoon connoisseur but I remember vividly the first cartoon that blew my mind was Duckman. And because it was super adult, I’d stay up late in my room and watch it without my parents knowing. Duckman pretty much introduced me to adult cartoons.

As you know, the animation field is ripe for having more diverse and Black talent both behind the scenes and in terms of content. What are your thoughts on the subject?

Animag: Can you tell us how the idea for “A Starboy Is Born” came about?

Hurwitz: Abel and I had been talking about him appearing on American Dad! The concept started small, but “Starboy” quickly grew into a very ambitious project. Celebrity cameos are inherently corny, and The Weeknd is a very big star. The only way to pull it off was by going totally absurd. Abel is a fan of American Dad!, so he trusted us. I couldn’t pass up an opportunity like that, so we turned The Weeknd into a virgin.

How did you get The Weeknd’s attention?

It’s a long, weird story that started in Marshmello’s Las Vegas hotel room. He also loves animation, and invited some Robot Chicken writers to his concert to discuss some ideas. I met a guy named Cash who turned out to be The Weeknd’s manager. I mentioned I write for American Dad! and he was like, “Are you serious? Let me get your number. The Weeknd loves American Dad! He just flew to Dubai and watched it the entire flight.” I honestly didn’t expect anything to come from it. Then a few days later, I got a text from Abel.

What was it like to work with him on the episode?

Kind of like working with any other writer on American Dad! … If he ever wanted to give up superstardom and write cartoons full-time, he would be a natural.

What did you love about working with The Weeknd?

I loved that our sensibilities were so aligned. There was literally not one time we disagreed about something. Either we both loved a joke, or we both thought it could be beat.

How has American Dad! evolved during your time on the show?

It’s hard to believe American Dad! is going to hit 300 episodes this season. I’ve been there for the last hundred, but when the show premiered, I was still in school. The writers room has gone through different eras. It’s cool to have the real OG guys like Matt Weitzman, Brian Boyle, Parker Deay and Steve Hely in the room. There’s a great balance of keeping it fresh, but also honoring the show’s history.

The single biggest evolution since I arrived is the blossoming of Klaus. Sometimes, it takes a couple hundred episodes to find a character. That’s why all new shows should be given at least 200 episodes to find itself, in my opinion.

What is your biggest challenge on the show in 2020?

Nothing. 2020 is smooth sailing and America is great again. But if I had to pick something, it would probably be the global pandemic our government failed to prevent ravaging every part of production.

What is your take on the overall state of animation today?

Animation is so strong now, and it always will be. I show the classic Chuck Jones cartoons to my four-year-old and he laughs his ass off just like I did. It’s cool to write in a medium that’s actually timeless.

“A Starboy Is Born” is getting Emmy buzz. Why do you think this episode stands out?
Obviously, the song is unreal. “The Weeknd’s Dark Secret” had something like 5 million YouTube views in a month. More importantly, people genuinely love it. It’s a Weeknd-level banger and the comedy isn’t mean spirited. I saw one kid on YouTube declare it the “virgin anthem.” The Weeknd is the king of music in 2020, he’s a mega celebrity, a sex symbol, and he sang the most self-deprecating song imaginable on American Dad. That’s pretty awesome.

Watch the full “A Starboy Is Born” episode on TBS.com — or at least check out “The Weeknd’s Dark Secret” below!