Trailer: ‘Animaniacs’ Returns for an Even Insaney-er Final Season on Hulu

Hulu today dropped the official trailer for the third season of its acclaimed reboot of 1990s cartooon classic Animaniacs! While this will, alas, be the final season of the multi-Emmy-winning comedy from Steven Spielberg and Sam Register, the preview promises a suitably epic conclusion to the Warner Siblings’ movie lot misadventures.

And of course, Pinky and Brain will be there too — ‘narf said.

Animaniacs Season 3 premieres on Hulu with 10 all-new episodes on February 17.

Synopsis: Yakko, Wakko and Dot return with an all-new season of laughs, songs, pop culture parodies and enough zany antics to fill a water tower (or at least 10 episodes!). Pinky and Brain’s never ending plans to take over the world journey them to the ends of new lands, deserts and even the space time continuum. And, while new friends Starbox and Cindy continue their play date, the Warner siblings must battle their way out of a video game, learn the secrets of being a teen influencer and escape a mad scientist’s island all while finding time to teach us about the threat of global warming!

Animaniacs features returning original voice stars Rob Paulsen as Yakko and Pinky, Jess Harnell as Wakko, Tress MacNeille as Dot and Maurice LaMarche as the Brain (among others). 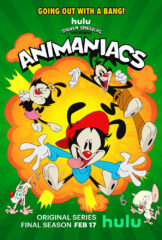 Animaniacs is produced by Amblin Television in association with Warner Bros. Animation.