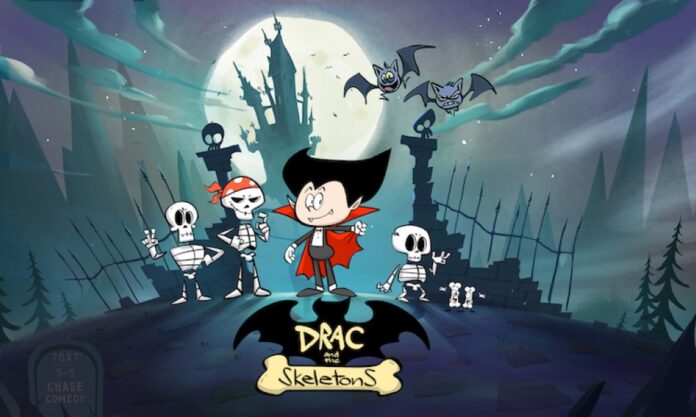 Global kids and family entertainment co. Toonz Media Group has partnered with India’s ELE Animations Pvt. Ltd. to co-produce Drac and Skeletons, a spooky chase comedy developed and owned by both companies. The 78 x 7′ series aimed at kids four to seven years old is being animated in digital 2D in both an international English-language version and Indian version in Hindi.

Drac and Skeletons is about two netherworld rivals trying to outwit each other as three prankster skeletons take refuge at Count Dracula Junior’s castle only to stay there forever! The skeletons try to outsmart and outrun Drac (a Vegan Vampire) but Drac has few tricks up his sleeve to keep his home. What follows is a thoroughly entertaining sidesplitting chase comedy!

Silas Hickey, who has produced multiple award-winning shows and pioneered several original content development initiatives in Asia-Pacific for Cartoon Network/WarnerMedia, will be the creative consultant for this show along with Paul Nicholson, known for The Amazing World of Gumball, The Heroic Quest of the Valiant Prince Ivandoe and other successful international animated series.

Toonz will undertake the entire pre- & post-production of the series. Voiceover and post-production of the international version will be handled by Telegael, a Toonz affiliate company based in Ireland. Toonz will also have the exclusive distribution rights to exploit the series in all media and platforms including L&M rights worldwide, except Ireland. ELE Animations will be responsible for all of the series animation production.

“We consider this agreement with ELE Animations to co-produce this Indian IP as a strategic one, as Drac and Skeletons has a universal theme,” said P. Jayakumar, Chief Executive Officer of Toonz Media Group. He added that there will be both domestic and international versions because of high interest from broadcasters.

Durga Prasad, Director, ELE Animations, said, “When we first discussed the project with Toonz, we decided then and there that it is a kind of IP we should be part of. It has all the ingredients to be a fan favorite among international and domestic audience.”