‘The Proud Family: Louder and Prouder’ S2 Trailer Brings the Whole Crew Together 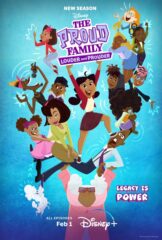 As part of the Winter 2023 TCA Press Tour, Disney+ took to the stage Friday morning to reveal a robust slate of premiere dates and first-looks (alongside Disney Channel and National Geographic). This included a brand-new trailer and key art for the much anticipated Season 2 return of The Proud Family: Louder and Prouder, premiering exclusively on the streamer February 1 with 10 new episodes.

The Proud Family: Louder and Prouder picks up the story of its central character, Penny Proud, and her iconicfamily: parents Oscar and Trudy, twin siblings BeBe and CeCe, and grandmother Suga Mama (and Puff!). By Penny’s side is her loyal crew: Dijonay Jones, LaCienega Boulevardez, Zoey Howzer, Maya Leibowitz-Jenkinsand Michael Collins.

Building off the standout success of the series’ debut, Season 2 of  continues to tell entertaining and laugh out-loud stories, while highlighting culturally specific experiences of the Black community and addressing universal topics. Various storylines this season  touch on self-worth, interracial dating and Juneteenth.