When you set out to adapt an animated feature based on the work of Terry Pratchett, you know that millions of the fantasy author and satirist’s fans will be watching the results very closely. That’s a fact that wasn’t taken lightly by the creative team behind the new CG-animated feature The Amazing Maurice, which began its U.K. run in December and will premiere in the U.S. on February 3, through Viva Kids.

The clever film, which is produced by Emely Christians at Ulysses Filmproduktion (Germany) and Andrew Baker and Robert Chandler at Cantilever Media (U.K.), offers a fresh spin on the tale of the Pied Piper of Hamelin. The central character is a scheming ginger cat (voiced by Hugh Laurie) who manipulates a group of talking rats and a naïve piper boy (Himesh Patel) to con villagers out of their money. Things take a surprising turn when they meet a clever, book-loving girl called Malicia (Emilia Clarke) who has her own ideas about how this story should turn out. The film is directed by Toby Genkel (Little Bird’s Big Adventure, All Creatures Big and Small) from a script by Terry Rossio (Aladdin, Shrek).

Faithful to the Master

“The greatest challenge of all was doing justice to Terry Pratchett and his incredible work,” says Christians, an acclaimed producer whose many credits include A Stork’s Journey, The Flight Before Christmas, Luis and the Aliens and the two Ooops! Noah Is Gone movies. “We set out to create loving characters that our viewers will fall in love with, and we want to make people think without educating them.”

Christians also mentions that her studio wanted to have a team from the U.K. as production partners, because this was a Terry Pratchett adaptation after all. She adds, “We also felt that it made great sense for Robert’s Sheffield-based Red Star 3D to split the work with Studio Rakete in Hamburg. It’s not always easy to split the work for an animated movie between two countries, but I have to say it all went very smoothly in this case.”

Chandler says that the toughest challenge with adapting the work of Pratchett is doing justice to his words. “Terry’s books are literary works and this doesn’t always equate to great cinema.,” he notes. “The work we did with the screenwriter and directors, and the art director and all the artists and animators, to refine the novel and turn it into a three-act animated movie that’s simultaneously fun and visually-driven, and carries the depth and themes of Pratchett, was the greatest challenge. We took this challenge really seriously and I hope it paid off.”

“My first reaction was one of, ‘Oh my God, Terry Pratchett!,’” recalls Genkel. “I felt a bit of weight on my shoulders. When I read the book, I knew that there was nobody quite like Pratchett. A fantastic story, all those wacky characters and effortless humor, paired with very strong commentary — it’s so impressive how he always manages to reflect the truth about human behavior with such great humor. His writing has such great rhythms to it and the imagery is so strong. Apparently, he loved Germany and the Black Forest and the Grimm fairy tales, so it truly resonated with me.”

When the director first read the novel, he started to mark the lines that he thought must be included in the film because they were so brilliant. “Of course, then I found myself marking entire pages, because every line is brilliant,” says Genkel. “So, the challenge was which lines not to take. Those were very difficult decisions to make and all I can say is that I hope we picked the right ones! But here is the comforting thing: No matter which line from the novel we chose, it’s always great!” 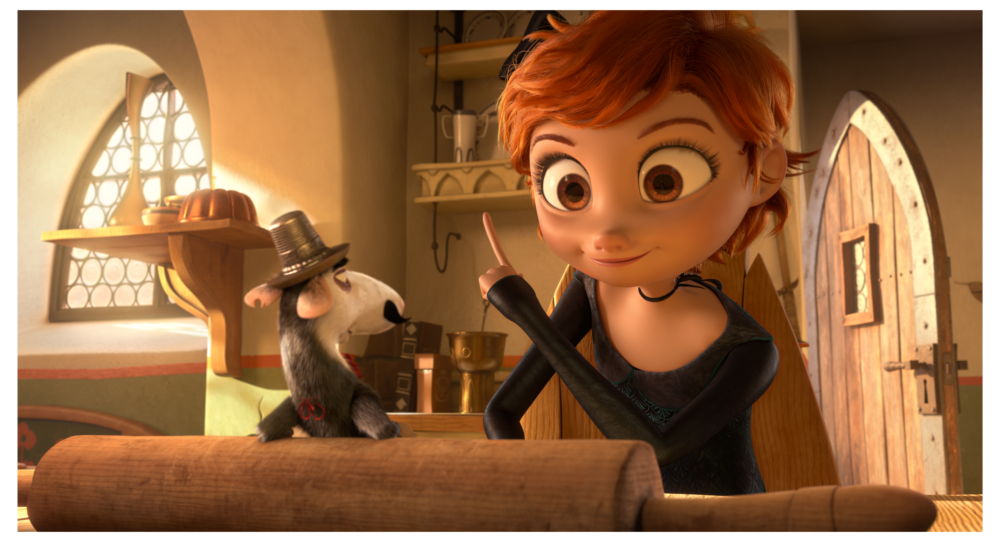 The artistic team was also aiming to make the movie as visually arresting as possible as well as straying from what is seen as the typical modern CG look for family animated movies.

As producer Andrew Baker (Robozuna), who is also a long-time Pratchett fan, points out, “We knew that our story is set against a fictional medieval German town, so our artists did a lot of research on actual locations in Germany to get the right look for the buildings, the cobblestone streets, the forest. There are actual buildings in the country that date back to the Middle Ages, so we had all these great real-life references.”

The movie had a secret weapon in the artwork created by production designer Heiko Hentschel (The Congress, Luis and the Aliens). “He brought something extra special to the film,” says Baker. “The movie’s characters have such a distinct look. They are neither Disney nor arthouse. Maurice, Malicia, Keith, all our rats — they look quite unique and show so much personality. We were staying away from anything that looked generic or bland.”

“We were very aiming high, something that could rival a big CG-animated feature from Pixar or Disney,” says Hentschel. “I always aim for visual simplicity in my designs. We opted for simple, recognizable shapes for the characters, which stands in good contrast with the elaborate sets. The main goal is to deliver a quick read. The audience should instantly get what the image is trying to convey.”

The producers also bring up the fact that the simple mention of Pratchett’s name opened many doors to them. “That’s how we ended up with our original character designer, Carter Goodrich,” recalls Baker. “We did some research and decided that we would love him to take an early shot at designing the characters. Of course, we had big ambitions for the way we wanted the movie to look like but we knew we wouldn’t have a budget like a Disney feature. So when we reached out to Carter or any of the actors, we told them that we don’t have a lot of money to play with. But, as soon as we told them it was a Pratchett project, they’d tell us that they love him and it opened so many doors for us.”

Goodrich says he was immediately intrigued by the story’s mixture of a cat, rats and a period costumed pied piper and a smart, female protagonist. “The fact that the rats were in their own costumes as well is always a bonus,” he mentions. “When animals are clothed it allows for more opportunities to find good shapes and clues regarding who the character is or could be.”

“I was allowed to simply make a pass on the characters without too much input as to details,” he recalls. “The inspiration comes from how I might see or imagine them; who they might be in addition to their assigned role in the story. If the characters don’t come with a whole lot of specific details, then they’re usually more fun and easier to explore. When you don’t have all the voices in your head, then it’s a looser, freer process. So you might be able to bring something to the table that hadn’t been considered, which gives the character something unexpected. Not that I necessarily did that with these characters, but I hope I did!”

Catnip for the Young at Heart

After many years of hard work, the filmmakers can’t wait to see how general audiences will respond to the film, which is also being showcased at this month’s Sundance Festival.

“What I love and admire about Terry Pratchett is what I would call the ‘Pratchett melody,’ or even better, symphony,” says Genkel. “He makes us laugh effortlessly, but always has something to say. There’s a message of tolerance and mutual respect, something that really resonates with me. What I would hope is that we managed to capture that symphony and the audience will hum the music of the story with a smile on their faces after seeing the film.”

“I hope that the film will do one thing above all: entertain our viewers and let them leave the cinemas with a good feeling,” notes Christians. “And if The Amazing Maurice also makes you think about things differently — in one way or another — I would be completely satisfied!”

Baker concludes, “As well as being entertained and amused I’d hope that audiences are intrigued about the world of Terry Pratchett and not only read this novel, but also his other Discworld books! We feel very happy with the film and believe that we have something the fans will love as much as those who have never read the book. Everyone worked so hard to make this happen, so that the final result is something we are all immensely proud of! There is nothing I would change even if we had double the budget!”

The Amazing Maurice opens in U.S. theaters on February 3 through Viva Kids.