Anima, the Brussels International Animation Film Festival, which runs from February 17 to 26 at Flagey in Brussels, will, as every year, pay special attention to the youngest film lovers. The program of films for young audiences will open on Saturday, Feb. 18 with the Dutch/Belgian feature Oink (Knor / Un amour de cochon), directed by Mascha Halberstadt.

Described as a “wonderfully anarchic” comedy showcasing stop-motion technical mastery and endearing characters, Oink is directed by Mascha Halberstad (Fox and Hare, Munya in Me). The film follows the adventures of Babs, who dreams of getting a dog for her birthday, but instead receives a little pig. Selected at the Berlinale and awarded the Audience Prize at the Ghent Film Festival in 2022, Oink will be screened for the very first time in French at Anima.

“What a pleasure to present a film that is truly for all audiences. We’re certain that everyone will have a great time with this very badly behaved little pig!,” say Dominique Seutin and Karin Vandenrydt, co-directors of the Anima festival.

The ‘Kids’ festival section will include 11 feature films and nine short film programs. Feature films selected for 2023 offer multigenerational appeal and include four new releases: Three Robbers and a Lion offers families a colorful escape from reality with its bold script and CGI; Little Allan: The Human Antenna is a mischievous story of a shy a human boy and his alien gal pal; My Grandfather’s Demons follows Rosa to a mysterious corner of rural Portugal, and Sing a Bit of Harmony will appeal to fans of Japanese animation (and musicals).

Many of the past year’s favorites will also be back in theaters during Anima, including Ernest & Celestine: A Trip to Gibberitia, Icarus and Yuku and the Flower of the Himalayas.

Anima will also offer the best in family-friendly shortswith tailor-made sessions for each age group. The youngest will enjoy the dialog-free Franzy’s Soup Kitchen (3+), while slightly older children will follow the adventures of an invertebrate like no other in Superworm (5+) and of a platypus mad enough to conquer the stars in No-No Goes to Space (6+). And big kids will get lost with 10-year-old Ellie, who discovers the secrets of an island in the middle of a town in Funny Birds (8+).

There will also be plenty of other out-of-competition programs on show, such as A Hedgehog in the Snow, a compilation of animated poems from Fresh out of School, and some great examples of Spanish animation. 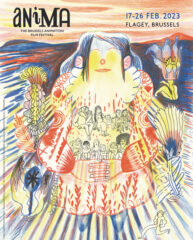 The jury for the Young Audience Film Competition will be made up of Karine Miralles (producer; teacher at Labodanim), Carlo Vogele (director, Icarus; former Pixar animator) and Britt Raes (director, Luce and the Rock; teacher at the KASK school).