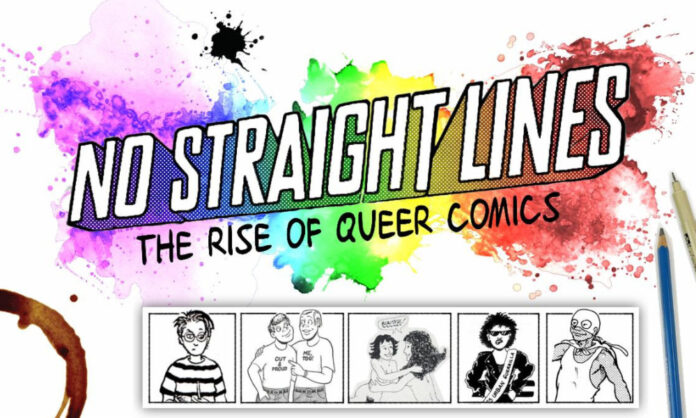 A new documentary following the evolution of LGBTQ+ representation in comics is due to premiere on PBS’s Emmy-winning anthology series Independent Lens this month — featuring interviews with Alison Bechdel (Fun Home, Dykes to Watch Out For) and other pioneers of underground comix exploring queer lives and identities. Described by critics as both entertaining and informative, No Straight Lines: The Rise of Queer Comics is a deep dive into this history, directed by Peabody Award winner Vivian Kleimen (Color Adjustment).

No Straight Lines takes viewers from the 1970s — when the LGBTQ+ experience was absent from pop culture — through the careers of five trailblazing cartoonists who depicted everything from the AIDS crisis to “coming out” to same-sex marriage. The film captures the beginnings of queer comics, from underground art form to social movement and, finally, the mainstream acceptance of queer characters and their stories in comic books, newspaper strips and graphic novels.

No Straight Lines features interviews with five queer comic book artists: Bechdel, Jennifer Camper (Rude Girls and Dangerous Women), Howard Cruse (WENDEL, Stuck Rubber Baby), Rupert Kinnard (B.B. and the Diva, Cathartic Comics) and Mary Wings (Come Out Comix). These vanguard artists use comics as a tool for social change and queer acceptance, showcasing the everyday pursuits of love, sex and community through a humorous and artful lens, and pushing a marginalized scene into the mainstream.

“No Straight Lines is the story of a DIY art form — often considered junk food for kids — that over the past 50 years has been used by queer artists as a powerful medium to represent our lives,” said Kleiman. “More than a chronology of milestone events, I wanted to create an intergenerational story of our emergence from rejection to acceptance, and help LGBTQI youth feel safe.”

In the documentary, artist interviews and their work, are interwoven with stories of landmark moments in LGBTQ+ history —from the Stonewall Riots to the AIDS epidemic and more. Together, these elements tell the story of how the queer comics scene shed light on the experiences of generations in a previously underrepresented community.

Kleiman directed and produced the documentary. Also serving as producer is Justin Hall, who edited the Lamdba Award-winning, Eisner-nominated book No Straight Lines: Four Decades of Queer Comics and created the comics True Travel Tales and Hard to Swallow.

No Straight Lines premieres on PBS on January 23 at 10 p.m. ET (check local listings) and will be available to stream via the PBS Video app.