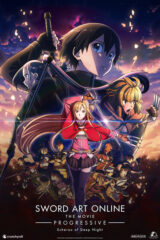 Crunchyroll, along with partner Aniplex of America, announces tickets are now on sale for Sword Art Online the Movie -Progressive- Scherzo of Deep Night in North America. The film, coming to theaters on February 3, will be available in both English dub and subtitled. A new English dub trailer has debuted in concert with the launch of ticketing.

Tickets and additional film information are available on Fandango.

This may be a game, but it’s not something you play.

The world’s first VRMMORPG (Sword Art Online) became a game of death. Over a month has passed since 10,000 users were trapped inside the game world. Asuna, who cleared the first floor of the floating iron castle of Aincrad, joined up with Kirito and continued her journey to reach the top floor. With the support of female Information Broker Argo, clearing the floors seemed to be progressing smoothly, but…

Conflict erupts between two major guilds who should be working together – the top player groups ALS (the Aincrad Liberation Squad) and DKB (the Dragon Knights Brigade). And meanwhile, behind the scenes exists a mysterious figure pulling the strings….

In a dangerous battle of death, there is an assault that differs from the threat, and it will involve Asuna and Kirito…!

An anime adaptation, Sword Art Online Season 1, aired in 2012, followed by four more seasons to date. In 2017, a theatrical film, Sword Art Online the Movie: Ordinal Scale, was released. Additionally, the franchise has produced a wide-ranging media mix of games, manga, and more.

Sword Art Online Progressive is a reboot light novel series, penned by Kawahara himself, offering a deeper look at where it all began: on Aincrad’s first floor.

2021 saw the launch of an all-new animated film adaptation based on the Sword Art Online Progressive light novels. The first film in the series, Aria of a Starless Night, a rebooted Aincrad arc seen from Asuna’s point of view, debuted at No. 1 at the weekend box office in Japan and was a long-running hit, staying in theaters nationwide for 10 weeks.