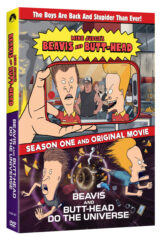 Cartoondom’s most impactful Gen X slackers are doin’ stuff again — specifically, bringing their hit adult animated relaunch to home entertainment. The Paramount+ series Mike Judge’s Beavis & Butt-head Season 1 arrives on DVD on March 14 in a three-disc set comprising all 12 episodes of the new show, as well as the Paramount+ original movie Beavis & Butt-head Do the Universe.

Synopsis: Nearing their 30th anniversary, Mike Judge’s Beavis & Butt-head, America’s favorite culture critics, are back. They now have more than just music videos to make fun of — reality TV, the internet and Mixed Martial Arts will all be crossing their TV screen! Brought back by creator Mike Judge, Beavis and Butt-Head are dumber than ever.

This release will also feature Beavis & Butt-head Do the Universe, where Beavis and Butt-Head go on a Space Shuttle mission in 1998, fall into a black hole, and reemerge on Earth in 2022, where they are pursued by the NSA, the Governor of Texas and a highly-intelligent version of themselves from a parallel universe.