Spring is just around the corner, and at least one fuzzy woodland creature is ready to come out of hibernation! Disney Branded Television announced today that its new animated buddy comedy Kiff will scurry to its Disney Channel premiere on Friday, March 10 at 8 p.m. EST/PST, followed by a launch on Disney+ streaming on March 15. The show’s full theme song video was also unveiled, watch it below!

The show stars Kimiko Glenn (Orange Is the New Black, Centaurworld) as the optimistic squirrel, Kiff, whose thirst for life takes her on countless adventures through the city alongside her chill bunny bestie, Barry, voiced by H Michael Croner (Craig of the Creek). Joining the cast in recurring roles are: 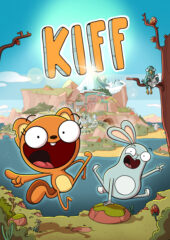 From creators and executive producers Lucy Heavens and Nic Smal, the series follows Kiff and Barry as they navigate school, relationships and their often-eccentric community in Table Town, a world where animals and magical oddballs tackle day-to-day life together.

Inspired by the people and places Heavens and Smal experienced when they were growing up in Cape Town, South Africa, each half-hour episode, comprised of two 11-minute stories, will include a new original song. In addition to their creative roles, Heavens and Smal also voice characters in the series: Heavens as Kiff’s drama teacher, Helen, and Smal as the principal of Table Town School, Principal Secretary.

In addition to Heavens and Smal, the creative team includes Emmy Award-winning Kent Osborne (Phineas and Ferb, Adventure Time), who will serve as co-producer and story editor, and Winnie Chaffee (Captain Planet and the Planeteers) as producer. Kiff is produced by Titmouse, the Emmy Award-winning animation production company, in association with Disney Channel.

Also available March 10, planned extensions for the series include the Kiff Original Soundtrack from Walt Disney Records and a stand-alone vertical-scrolling adventure game, which will be available in the DisneyNOW app and on DisneyNow.com.