Among the 15 stellar titles that are shortlisted for the Best Animated Short Oscar this year is a powerful project titled Save Ralph, which was created in conjunction with the Humane Society Intl. to call for an end to cosmetic testing on animals worldwide. The stop-motion spot, which was written and directed by Spencer Susser (Hesher), first debuted in April 2021, and went on to win numerous awards, including last year’s Cristal prize at Annecy, the Best Commissioned award at Ottawa and the Cannes Lion Award.

The short introduces viewers to Ralph, a hapless rabbit (voiced by Taika Waititi) who is one of the many victims of the brutal practices of the cosmetic industry. Susser joined forces with puppet maker and set designer Andy Gent (Fantastic Mr. Fox, Isle of Dogs) and his team at London-based Arch Model studio to bring the likable rabbit to animated life. Produced by Lisa Arianna, Spencer Susser and Jeff Vespa, the short also features the voices of Ricky Gervais, Zac Efron, Olivia Munn, Pom Klementieff and Tricia Helfer. Susser answered a few of our questions about his brilliant, poignant and ultimately very effective short:

Animag: Congrats on the worldwide success of your project and all the recent accolades. Can you tell us how you got involved with Save Ralph?

Spencer Susser: I’ve been vegan for about 9 years and have always wanted to do something to help people connect the dots between the cruelty towards animals and the disconnect we have with the food we eat and the products we use. I was learning about the cruelty of cosmetic testing on animals and how prevalent it still is in the world so I wanted to do something to call attention to it and hopefully create real impact for animals. I had made a few stop motion projects in the past and absolutely fell in love with the process SAVE RALPH seemed like the perfect subject for a new stop motion film.

When did you start working on it and how long did it take to complete?

I started working on Save Ralph in 2020, at that funny time in the world when we were all locked in our house not sure if it was safe to go outside.  It took about a year to complete. After writing the script, I storyboarded and recorded a temp version of the voices. I then cut those, follow by shooting a crude live action (shot on iphone) version that we used for performance reference, pacing, and timing. I then re-recorded all the voices with the cast, which I then cut so we could use the actual voices to animate to. We shot for about 45+ days. On a good day we’d do about 3 or 4 seconds. Then the typical post process, edit, vfx, sound, color.

We shot at Arch Film Studios in the U.K. with Andy Gent and his brilliant team of model makers, set builders and the incredible Tobias Fouracre who singlehandedly animated every frame of the film.

How many puppets/sets were created? How big were the puppets?

There was one hero puppet, which we slightly reconfigured to use as another rabbit in the lab which was close to camera, and 3 other half rabbits- the shot was framed in a way that we only saw one side so Andy cleverly build half for those rabbits and gave them basic articulation of the mouth so they could talk but didn’t need a lot of detailed animation. We also used a shallow depth of field so we could get away with less detail in the half rabbits. The shot that includes all the rabbits is continuous, so motion control was used to capture the different passes. The Ralph puppet is about one foot tall with his ears standing at attention, if he stands on his tippy toes he’s a bit taller.

Technically there were six sets total, but the living room, kitchen, and dining room were combined so they could appear in each others backgrounds. I built the basic sets in 3D then sent them to Andy where he mocked them up out of foam core so we could frame them in camera and determine the correct size before he built and dressed them properly.

I found a lot of great references for props and details which Andy and his team would build in 3D and then 3D print at the correct scale. It’s such a fun creative process. It feels like anything you dream up is possible.

What did you find rewarding about this project?

The most rewarding thing is the impact the film has made for the animals. The film was used to drive traffic to a petition to help ban cosmetic testing on animals globally. It got millions of signatures and has had a huge impact. Mexico for example became the first country in North America to ban cosmetics testing on animals and the film is also helping advance legislation in several other countries. I’m so proud to have played a small role in this incredible long overdue positive change in the world.

Also, stop motion is so rewarding, period. There’s nothing better then watching those first few seconds of a character come to life. You spend hours and hours, day upon days preparing, building, animating and the second you see Ralph standing on his own and saying his first few words, he exists. He is a real-life talking rabbit. To me, stop motion is magic and I would do it every day if I could.

Why do you think it became such a successful and effective short?

It’s hard to know why somethings work and others don’t, but I think the film is effective because it makes you think about an issue. Ralph is so likable straight away and when you realize what he’s talking about you want to shake him out of it. He’s just a really nice guy, trying to do his best at the worst job in the world. The film delivers a message without hitting you over the head with it and hopefully Ralph’s journey moves you, and maybe it fun to watch a talking rabbit with a tie? 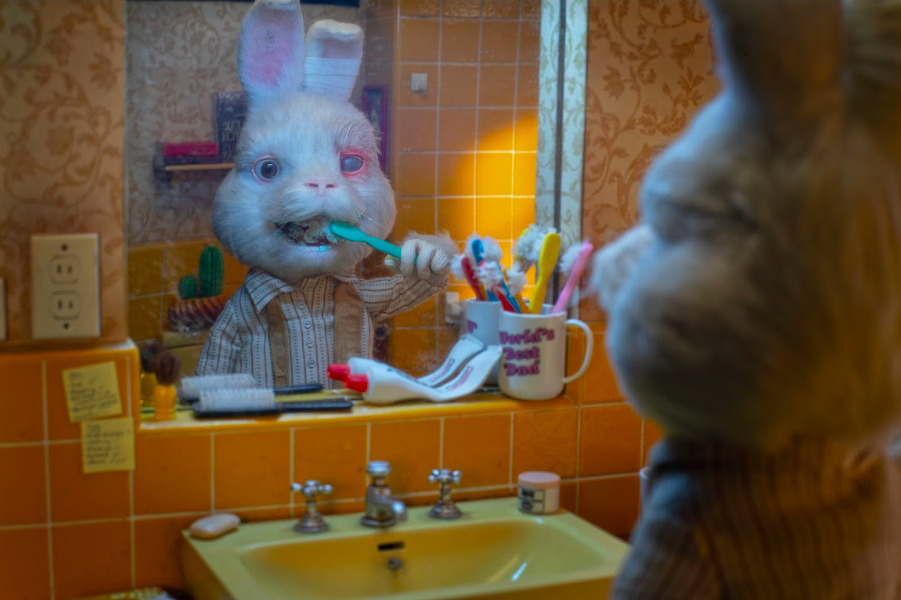 What were the biggest challenge?

Working in several different countries during a pandemic was challenging. I started making the film in Los Angeles, we shot in England, I did all the post in Australia, and recorded the voices all over the map. At certain times I was working in three time zones. Never enough time in the day, but who needs sleep when you’re lucky enough to be making a film!

What have been the most memorable responses you received from audiences/viewers?

There was a lot of fan art done. It’s great to see so many people take their time and talent to create art based on Ralph. Someone made a video about all the hidden messages and details in the film. There was also a handful of reactions videos — videos of people filming themselves watching and reacting to the film. Also a few live action remakes.

What do you love about working in stop motion animation?

I love the absolute control over the story telling you have. I love that you get to direct every frame. Every frame is a choice and you and the animator decide every bit of that performance. Every look, every lean, every scratch, every blink, etc. I love making the film before you make the film. Stop motion is so time consuming that it’s so important to work it all out before you shoot your first frame.  I love the magic of making inanimate objects come to life. I love the handmade human quality that finds its way into the characters and the sets. I love that every detail, every prop, whether it’s a book, trash, water stain in the bath, a toilet paper roll with one square left, or food left on the counter, it all needs to be thought about and created. I think it’s the ultimate creative expression.. That all said, it’s very, very, very, very s l o o o o w.

What is your next project?

I’ve written a pilot for a TV show and have been developing a feature (with a stop motion component). Hopefully one of those two things will come together in the near future. Currently I’m editing a musical bio pic based on the music and life of Robbie Williams that I also directed second unit on. It’s called Better Man.

You can watch Save Ralph below:

Watch Save Ralph and find educational materials on the current status of animal testing and how to take action against it available at www.hsi.org/saveralphmovie.