Strap on your aprons and prepare for kawaii battle: HIDIVE has set the English dub streaming debut of Akiba Maid War for Saturday, January 14 at Noon ET. An original production from studio P.A. Works (Ya Boy Kongming!) and Cygames, the series premiered in Japan in April and is ready to clean up in more territories. 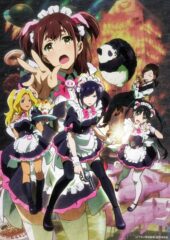 Synopsis: In the spring of 1999, bright-eyed Nagomi Wahira moves to Akihabara with dreams of joining a maid café. She quickly dons an apron at café Ton Tokoton, a.k.a. the Oinky Doink Café, but adjusting to life in the big city isn’t easy. Paired with the dour Ranko who never smiles, Nagomi must do her best to elevate the Oinky Doink Café over all other maid cafés vying for top ranking, but she soon discovers not everything is as it seems amid the frills and thrills of the maid cafés of Akihabara…\

The new English-language dub was overseen by director Joey Goubeaud from an ADR script by Marta Bechtol, and features the voice talents of Alyssa Marek as Nagomi Wahira, Chaney Moore as Ranko Mannen, Cat Thomas as Yumechi, Christina Kelly as Shiipon and Teresa Zimmerman as Manager.