A new animated series inspired by traditional myths and legends is the latest smash hit for Chinese streaming platform Bilibili, totting up more than 10 million views in its first three days. Titled Yao-Chinese Folktales, the series launched January 1 and a week out is averaging a 9.6 out of 10 rating on Douban, with more than 60,000 reviews. 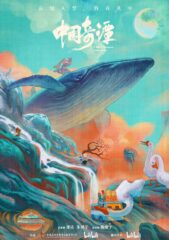 Yao-Chinese Folktales is a bit of a commemorative tribute to the centennial of Chinese animation celebrated in 2022, with the past and present also colliding as traditional art influences such as paper cut out, shadow plays and watercolor are wielded by innovative young directors and producers to adapt classic literature.

The first warmly reviewed episode, “Nobody,” is based on Journey to the West and centers on a low-ranking pig demon who rebels against his cruel superiors. “Nobody” was praised by fans for its reflection of contemporary class struggles, while the second episode “Goose Mountain,” based on Liang Wujun’s collection of myths and directed by Hu Rui, created a buzz for its fantastical visual spectacle and distinctly Chinese aesthetics.

“As Chinese animation enters a new century, the series is not only a tribute, but also carries the animation studio’s creative concept of ‘not imitating others, not repeating ourselves,'” Shanghai Animation Film Studio President and series producer Su Da told Global Times. “We will strive to realize the creative transformation and innovative development of traditional culture, and highlight the national integrity and Eastern charm in China’s 5,000-year history and culture.”

The first episode “Nobody” of Yao-Chinese Folktales is inspired by classic Chinese novel “Journey to the West” , but focuses on a little monster who works at the bottom of the ladder of a team of monsters who want to capture Xuan Zang. #anime #donghua #Chinese #Creative pic.twitter.com/K3fM8EFLbv