Blue-faced aliens and a familiar dashing feline were the big box office champs over the long new year’s weekend. James Cameron’s Avatar: The Way of Water had a swimmingly spectacular $82.4 million four-day weekend, bringing its total cume to $440.5 million after three weeks in release in 4,202 theaters. The movie has made over $1.397 million worldwide to date.

Meanwhile, DreamWorks Animation’s well-received sequel Puss in Boots: The Last Wish, directed by Joel Crawford, kept its number-two spot with a pawsome $21.7 million four-day weekend in 4,121 theaters and a total of $66.1 million after two weeks in release. The Shrek spin-off movie has made over $134.9 million worldwide to date.

Meanwhile Disney’s Strange World is still hanging on to the Number 10 spot at the box office, with a  $747,000 four-day weekend and a total of $37.2 million after six weeks in theaters. The movie, which is now also streaming on Disney+, has  made $67.5 million worldwide, and is considered one of the studio’s poorest performing animated features at the box office. 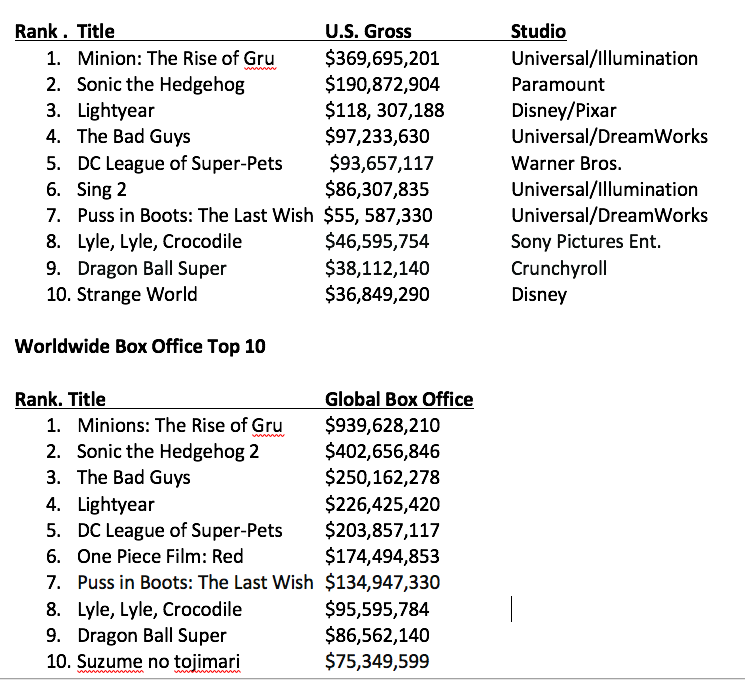