Astro-Nomical Ties Up with TubaN for ‘Larva the Movie’

Burbank-based Astro-Nomical Entertainment is joining forces with South Korea’s TubaN Studio to develop and produce an animated feature film based on the popular Larva IP, announcing plans to start production on a brand-new CGI feature film this year.

Written by Erica Rivinoja (Trolls, Borat Subsequent Moviefilm, Cloudy with a Chance of Meatballs 2, The Addams Family), the movie will take the comedic Red and Yellow Larva duo on a time-traveling, globetrotting action-adventure promising extreme comedy, aimed at a four-quadrant audience. 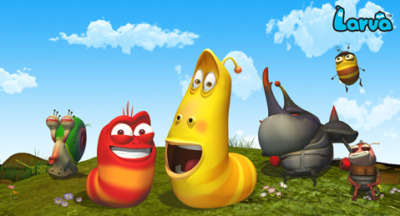 Ahead of the heroic grubs’ big screen project, Season 4 of the Larva series has launched worldwide, as well as the Netflix Original series Larva Island.

Starting production in 2011, 4 seasons of the Larva series have been released worldwide, including the Larva Island series launched as a Netflix Original. First produced in 2011, Larva boasts more than 5 billion views in the U.S., and over 59 billion views in China.

Astro-Nomical shares that it already has strong interest from Pelagius Productions, Joe Fries and Natalie Khoury to serve as lead investors and executive producers on the movie. “We are very excited to by the prospect of working on this project, it fits our business model on many levels,” said Joe Fries. Khoury adds, “We love everything about it, the creative direction is strong, and the brand is hugely popular.”

Astro-Nomical and TubaN will take the lead in securing financing, setting up the production pipeline and handling global sales & distribution including China, looking to collaborate with Pelagius.

“My partner, producer Jay Ahn (The Nut Job), has many strong relationships in Korea, he has brought us several exciting projects, and this one is amazing,” says Chris Henderson, co-Founder of Astro-Nomical. The studio previously teamed up with another Korean studio and provided IP development and consulting for Young Toys’ preschool brand Kongsuni and Friends.

“I am delighted that Larva, an established global IP is to be made into a feature film partnered with Astro-Nomical. The two companies will work closely together to make a great film that will appeal to global audiences,” said Kim Kwang-yong, CEO of TubaN.

Founded in 2017 by Ahn and Henderson, Astro-Nomical has been rapidly growing its global presence, and has already marked down a success with A Tale Dark & Grimm, which was Emmy nominated for Outstanding Animated Series in 2022. The 10-episode fairytale adventure was produced in collaboration with Novo Media Group and Boat Rocker Studios, streaming on Netflix. Going forward, Astro-Nomical plans to develop and produce its own and third party animated series, adult-skewing comedy projects, animated feature films and live action series. 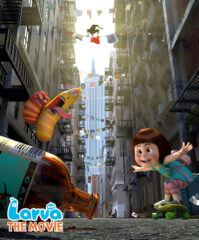 Pelagius Productions LLC was founded in 2005 by Fries and Khoury. The independent content, finance and production company has produced award-winning films (Talk To Me, Adjust Your Color) and developed multiple projects in all genres. Pelagius currently has projects set up with Cedric the Entertainer, Pure Imagination Australia and Zero Gravity Management, among others.

TubaN, the IP owner and production company of Larva’ is a global content specialist that develops and produces new contents focused on 3D animation and has been expanding its business into L&M, game development and distribution. Its current IP lineup includes Larva, Dino Core, Winkle Bear, Rotary Park and Oscar’s Oasis, among others.