Director Amy Bench’s powerful animated documentary short More Than I Want to Remember has won numerous awards and rave reviews since it debuted at the SXSW film festival last year. Produced by Mugeni Ornella, Bench and Carolyn Merriman, with animation direction by Maya Edelman, the beautifully crafted 2D short is one of the 15 projects shortlisted by the Academy Awards in the Animated Short Film category. It tells the powerful story of a Congolese child refugee’s search for family in the wake of violence and tragedy. We recently had a chance to talk to the short’s director about this unique and memorable short. Here is what she told us:

Animation Magazine: Congrats on the phenomenal success of More Than I Want to Remember. Can you tell us how you got involved with this project and learned about Mugeni’s immigration tale?

Amy Bench: Stories of migration have always resonated deeply with me, but I’ve become more devoted to the cause of immigration stories over the last few years, as immigration has become both more talked about and more depersonalized and deeply politicized. Because of this, my work has centered around bringing individual voices and personal experiences back to the migration narrative.

I have spent most of my life in Texas — a place where immigration is hotly contested  —and have dedicated myself to using my work to address how this conflict affects children and families, at the border and beyond.

Several years ago, I began reaching out to refugee assistance programs within my community as well as across the country to meet women who were interested in sharing their journeys. Mugeni was someone I met in 2019 and I was drawn to her as soon as we first connected. She has an infectious energy and her story was so urgent and underreported, with few outside of her region knowing about the persecution of the Banyamulenge people.

Mugeni’s story in particular has so many profound moments and lessons that resonate strongly beyond her own experiences. Her language is very visual and visceral. One of my favorite lines of hers is, “my heart was speechless, my tears were stuck inside of me…” Hearing the poetry in her voice during our interviews was really affecting — her words communicate so much about her experience and, most important, her state of mind in those moments.

My producer Carolyn Merriman and I met Mugeni in December of 2019. After our initial meeting, I flew to Michigan in January of 2020 to record Mugeni in a sound studio, and began editing Mugeni’s audio interviews shortly after that. I started working with designer Maya Edelman the next month, developing Mugeni’s character and the style frames. After we had a fine cut of the film, Maya began storyboarding. Finalizing the animation took another 18 months, and we expanded to a team of five animators.

Where was the animation produced? How many people worked on it?

The animation was produced in the U.S. and in Chile with a fairly small team. Maya Edelman, the film’s animation director, did the designs and storyboards, and she is based in N.Y.C. We had two lead animators: Samia Khalaf in N.Y.C. and Sebastián Bisbal in Chile. Sebastián led a team of three animators: Paula Tapia Pino, Catalina Etcheverry and Catalina Silva, all based in Santiago, Chile. I worked with the design and animation teams and did the final editing and sound design here in Austin, Texas.

The designs were hand drawn using a Wacom Cintiq tablet in Photoshop, and the animation was done in both Photoshop and After Effects using the drawing tablet.

What would you say were the toughest aspect of telling this story in animation?

The biggest challenge was finding a balance of stillness and movement in the design: and breathing animated life into Mugeni’s character and the world around her through the use of simple animation. We wanted the film to allow Mugeni’s words to lead, to create space for certain key moments to breathe — so that balance was very important to us throughout the process of design and animation.

What prompted you to use animation to tell this powerful true story?

I’ve often been asked why I used animation for such a deeply personal film. The simplest answer is, because this is a story based in the past, fueled by Mugeni’s recollections, this story could not have been told another way. But I have found that animation offers an intimacy and freedom of expression not available in other forms. The way we worked, one-on-one in a recording booth, allowed Mugeni to speak freely and comfortably. No lights, no camera, no crew. Just she and I in the booth with her supporters (her foster mom, her counselor and her foster dad) nearby.

I have found animation to be a very freeing and exciting medium in which to work. It combines my love of illustration and design with my passion for storytelling. I come from the world of documentary cinematography and directing. As a documentarian, I seek to reveal moments that allow for a deeper understanding of who we are as a people, moments that speak universally to our larger world. There are some stories where using a camera is not possible — or not welcome — and that’s where I have found animation to be an indispensable medium. For Mugeni’s story, it was a way to be with her emotionally as she navigated the events following the horrific and tragic separation from her family.

Who are your biggest animation influences/heroes?

I’m drawn to artists who pave their own path. I would say that Don Hertzfeldt’s fiercely independent spirit and use of animation to tell strikingly poignant stories about relationships and human existence are incredibly inspirational. He really challenges people’s perceptions of what animation can do, and his stories unfold in unexpected ways. His independence and clear vision are something I really strive for. His fascination with memory is something I share, and is a big part of More Than I Want to Remember. 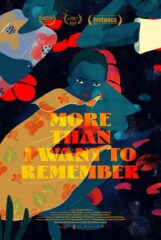 Animation is a brilliant artform that I find to be underappreciated. Like a great painting, beautifully designed animation can stop you in your tracks. Animation has this unexpected ability to help lead audiences to a deeper understanding of what people are thinking and feeling — you can go anywhere in the mind or in space — you can create a world that really connects at a deep, soulful level with people. With animation, literally anything is possible.

What would you like audiences to take away from your short?

That despite all that can be horrible in the world, there’s still room for kindness. Working on this film was a balm in a time when my own world felt upside down. Now that it is out in the world, it is my hope that through the beauty and immediacy of Mugeni’s words, people are inspired. I believe this film has the power to move conversations surrounding immigration beyond politics and toward our shared hope and humanity.

What were the most memorable reactions you have received from your short so far?

Audiences across the world have really connected with the film, from Senegal to Greece to N.Y.C. and L.A., which I think is really exciting and speaks to the universality of Mugeni’s story. In terms of personal reactions, Glen Keane’s response to the film — that it “penetrates the soul” — has been one of the most unexpected and exciting. He’s an artist that has spent most of his life creating and inhabiting some of the most iconic animated characters of my generation. When he saw our film and was so blown away by Maya’s artwork and how deeply he felt Mugeni’s story, it was deeply humbling for our team. He found Maya’s creative placement of patterns inspiring, potentially solving part of a puzzle in one of his own current projects. To have this artist exchange, reverse mentorship happening is really exciting.

More Than I Want to Remember is available to stream on Paramount+, and for a limited time on The Animation Showcase (details here).