Trailer: Crunchyroll Reveals English Cast for ‘Tomo-chan Is a Girl!’ 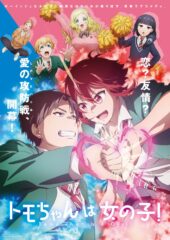 Kicking off the New Year, Crunchyroll will be delivering a double dose of romantic comedy in Tomo-chan Is a Girl! with both the Japanese and English dubs premiering day and date with Japan’s broadcast, every week, starting Wednesday, January 4 at 10 a.m. Pacific Time.

This past summer at Anime Expo 2022, it was confirmed that Lexi Nieto would be the English voice of Tomo Aizawa along with Sally Amaki as the English and Japanese voice of Carol Olston, which will be the first time Crunchyroll has ever used the same voice actor for both the Japanese and English dubs. The full English dub cast will now been revealed to include the following:

Caitlin Glass will serve as the ADR Director for the English dub. Glass has previously directed Fruits Basket (2019), Horimiya, Ranking of Kings and Sing a Bit of Harmony. Additional dub languages for the series will debut at a later time, which include German, French and Russian.

The Japanese voice cast will include:

Based on the 2015 four-panel manga series of the same name, written and illustrated by Fumita Yanagida, Tomo-chan Is a Girl! is produced by animation studio Lay-duce, known for Heroines Run the Show and Fate/Grand Order: First Order. The series is directed by Hitoshi Nanba, whose directing credits include Golden Kamuy, Gosick, Fate/Grand Order: First Order and Baki the Grappler.

Synopsis: Tomboy Tomo couldn’t have picked a more awkward high school crush ’cause it’s on her childhood friend, Junichiro, but he only sees her as one of the guys. Despite her pretty looks and signals, nothing gets through to this meathead! Will Junichiro ever realize Tomo’s into him and see her for the cutesy girl she actually is?!