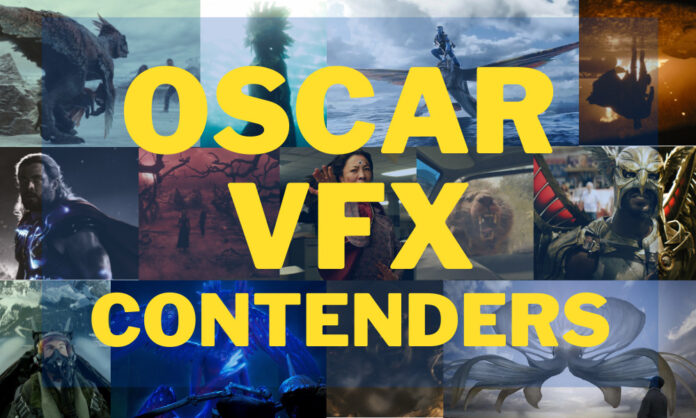 ***This article originally appeared in the January ’23 issue of Animation Magazine (No. 326)***

December marks moviegoers’ return to Pandora after a 13-year absence, which happens to be right in the heart of the 95th Academy Awards season. James Cameron has not been resting on his box office laurels but taking the time to produce four sequels that exactly meet his vision and extremely high standards. Like Cameron, Joseph Kosinski has been able to produce a follow-up installment that some would argue soars to greater heights than the original. Consequently, the Oscar for Best Visual Effects may well be an intense dogfight between Avatar: The Way of Water and Top Gun: Maverick.

Marvel Studios will be in the mix with Doctor Strange in the Multiverse of Madness and Black Panther: Wakanda Forever. The fifth spot is where things get really interesting as Nope, Everything Everywhere All at Once and Guillermo del Toro’s Pinocchio are strong contenders to upset the status quo — though they first have to get through Warner Bros.’ The Batman. That is not to say that the others mentioned below do not have a chance, as one cannot easily discount the appeal of animatronic and digital dinosaurs seamlessly sharing the screen, or the charismatic Dwayne Johnson getting to play an antihero with badass superpowers.

The Academy will announce the visual effects shortlist on December 21, nominees will be announced January 24 and the winner will be revealed during the 95th Oscars ceremony on Sunday, March 12.

Avatar: The Way of Water
Director: James Cameron
Released by: 20th Century Studios
Release Date: Dec. 16, 2022
VFX Supervisor: Richard Baneham
VFX Houses: Wētā FX, ILM
Notes: For James Cameron, visual effects are an essential part of his craft as a storyteller and filmmaker. Consequently, the technical boundaries of facial capture, underwater performance capture and CG water that is photorealistic and behaves physically correct have been pushed to a whole new level of believability. The prominence of the human character of Spider has resulted in even more of an integration between the live-action and animated characters.

Beast
Director: Baltasar Kormákur
Released by: Universal Pictures
Release Date: Aug. 19, 2022
VFX Supervisor: Enrik Pavdeja
VFX Houses: Framestore, BlackGinger
Notes: It is one thing to create a photorealistic CG lion, but quite another to have a digital creature that behaves photo naturalistically. Stunt performers stood in for the interactive moments such as the lions getting hugged and the finale showdown that results in a vicious mauling. However, it still came down to carefully executed keyframe animation and fur simulations to bring those scenes to life.

Everything Everywhere All at Once
Directors: Dan Kwan, Daniel Scheinert
Released by: A24
Release Date: March 25, 2022
VFX Supervisor: Zak Stoltz
VFX Houses: In house
Notes: With a team of five digital artists doing 80% of the work and an independent budget, the Daniels created their own version of the multiverse with renowned martial artist and thespian Michelle Yeoh at the center of the mayhem, which translated into A24’s first movie to earn $100 million. The visual effects style is more Ghostbusters than MCU, with the hardest shots being the ones involving bagels — and there is a fun scene involving an acrobatic juggling hibachi chef.

Guillermo del Toro’s Pinocchio
Directors: Guillermo del Toro, Mark Gustafson
Released by: Netflix
Release Date: Nov. 11, 2022 (theatrical), Dec. 9, 2022 (streaming)
VFX Supervisor: Aaron Weintraub
VFX House: Mr. X
Notes: A stop-motion feel was provided using effects simulation to make the snow sequences feel like falling paper. The interior of the dogfish was essentially a CG environment; so was the realm of Limbo where Pinocchio goes each time he dies and gets resurrected. The digital skies resemble something out of a Group of Seven painting. Of course, let’s not forget Guillermo del Toro’s trademark horrifically beautiful creatures, which were augmented with CG.

Jurassic World Dominion
Director: Colin Trevorrow
Released by: Universal Pictures
Release Date: June 10, 2022
VFX Supervisor: David Vickery
VFX Houses: ILM, Hybride, Lola VFX
Notes: There is no shortage of animatronic dinosaurs provided by special effects supervisor John Nolan with a massive head created for the Giganotosaurus. A close relationship was forged between the art department, visual effects and special effects to ensure that the digital model and the practical animatronic were indistinguishable. For the first time, feathers were introduced into the franchise with the menacing Pyroraptor threatening humanity.

Nope
Director: Jordan Peele
Released by: Universal Pictures
Release Date: July 22, 2022
VFX Supervisor: Guillaume Rocheron
VFX Houses: MPC, SSVFX
Notes: The movie features an alien that resembles a flying saucer and unfolds like an origami creature. It has the ability to harness the wind and cause devastation on the land below, which resulted in very heavy sand and dust simulations. The day for night photography combined color film stock and digital infrared footage. Then, there is the rampaging monkey that leaves a trail of bloody carnage.

Three Thousand Years of Longing
Director: George Miller
Released by: United Artists Releasing
Release Date: Aug. 26, 2022
VFX Supervisor: Paul Butterworth
VFX Houses: Method Studios, Fin Design + Effects, Slate VFX, Future Associate, Mr. X, Stage 23, New Holland Creative
Notes: The world building spans the Queen of Sheba’s ancient throne room and bed chamber, a nightmarish battlefield, Ottoman era interiors of Topkapi Palace and a modern-day London Tube carriage. Among the many stunning effects: The body of the Djinn (Idris Elba) gets ripped apart in the Bottle Vortex and the vapor of his kiss has a visible seductive quality. A blacksmith transforms into a demon which disintegrates into a cluster of spiders. A dream shot glowing with mathematical signs and figures is also one for the books.

Top Gun: Maverick
Director: Joseph Kosinski
Released by: Paramount Pictures
Release Date: May 27, 2022
VFX Supervisor: Ryan Tudhope
VFX Houses: Method Studios, MPC, Lola VFX, Blind
Notes: Some 2,400 visual effects shots were created, with a major set piece being the Darkstar jet flying into the upper stratosphere and its subsequent demise. Supporting digital augmentation included adding jets in the frame. Most of the VFX was fundamentally based on real photography. The bulk of the work takes place in the third act during the battle sequences, in particular the dogfight at the end which involved reskinning aircrafts.

On December 21, the Academy of Motion Pictures and Sciences will unveil its shortlist of 10 titles which will be eligible to compete for a nomination for the Best Visual Effects Oscar. The Visual Effects Society will announce its its nominations for the VES Awards on January 17.