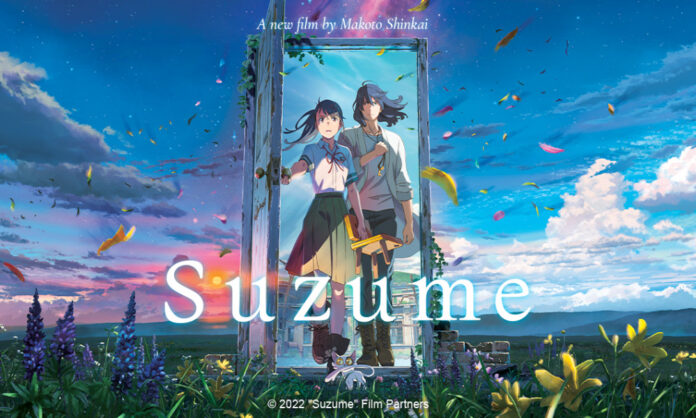 Global theatrical release dates for the film include:

Additional 2023 dates to be announced for additional Latin America and EMEA territories.

Award-winning creator, writer and director Shinkai’s most recent films, Your Name. (2016) and Weathering With You (2019) helped launch him to global renown. Weathering With You was selected as Japan’s entry for the best international feature film category of the 2020 Academy Awards and nominated in four categories in the 47th annual Annie Awards including best animated independent feature.

Suzume debuted in Japan on November 11 and has now surpassed 5.6 million admissions and earned 7.5 billion yen (approx. $55M USD), staying #1 at the box office in Japan for three consecutive weeks.

Crunchyroll acquired global distribution and marketing rights (excl. Asia) to Suzume from Toho during the Cannes Film Festival & Market last May. The film will be distributed in all major territories:

Synopsis: Seventeen-year-old Suzume’s journey begins in a quiet town in Kyushu (located in southwestern Japan) when she encounters a young man who tells her, “I’m looking for a door.” What Suzume finds is a single weathered door standing upright in the midst of ruins as though it was shielded from whatever catastrophe struck. Seemingly drawn by its power, Suzume reaches for the knob…

Doors begin to open one after another all across Japan, unleashing destruction upon any who are near. Suzume must close these portals to prevent further disaster.

A myriad of challenges await her on her journey. Despite all the obstacles in her way, Suzume’s adventure shines a ray of hope upon our own struggles against the toughest roads of anxiety and constraints that make up everyday life. This story of closing doors that connect our past to the present and future will leave a lasting impression upon all of our hearts. Drawn in by these mysterious doors, Suzume’s journey is about to begin.