To say that writer-creator Pamela Ribon and director Sara Gunnarsdóttir’s My Year of Dicks has had an amazing year might be an understatement. Originally conceived as a project for FXX’s Cake anthology, the imaginative project about a 15-year-old girl who is bent on losing her virginity in the suburbs of Houston in the early 1990s developed a life of its own, picking up top prizes at Raindance, Annecy and Ottawa. As we enter the year-end award season, this honest and hilarious depiction of a young girl’s physical and emotional experiences has been generating a lot of attention and great word of mouth.

“I had been interested in trying a project in the animated pipeline as I was being offered projects as a writer/director,” says Ribon, best known for writing animated features such as Moana, Ralph Breaks the Internet and Smurfs: The Lost Village. “The opportunity came from FX to try a short film that would allow for a wide-open animated world that could look and feel quite different from what people might have expected from me coming from a Disney Animation background, credits-wise. But I started in theater, doing sketch and improv comedy in Austin, and worked in comedy for a long time before I wrote for a demographic I often describe as, ‘Every single person in the whole wide world!’”

After her script was greenlit, Ribon was paired with Sara Gunnarsdóttir’s work (A Good Dream, Pirate of Love). “I fell immediately in love and I just had to see what could happen if our sensibilities came together,” she says. “I hoped it would feel like everything about being a teenager on the cusp of a terrible decision!”

The project is an adaptation of Ribon’s own teen memoir, Notes to Boys and Other Things I Shouldn’t Share in Public.  “I wrote a lot of notes to boys and kept the first drafts, and this is from a chapter in the book where I was 15 and decided to lose my virginity,” she recalls. “I had a lot of romantic notions about how this would go, as I was fed on a steady diet of early cable television, boy culture and borrowed/smuggled slightly dirty books. It was slim pickings in the outskirts of Houston in the early ‘90s! That being said … this is a work of realistic fiction. My mom insists I say that at every opportunity!”

Gunnarsdóttir mentions that the overall visual style of the project is close to her own personal style. “It comes from the way I usually work,” she explains. “It starts with a lot of reference footage to make sure the foundation has a realistic tone and movement to contrast the fantasy. Most often I use myself and my husband for reference, and in this case the two of us did shoot a lot of it since we were doing this during COVID and everyone else was filming their references alone in their living rooms. Ethan and I ended up doing a version of everything where the characters are touching. Then, we also filmed the actors over Zoom. I had a lot of sessions with Pam over zoom filming her face!” 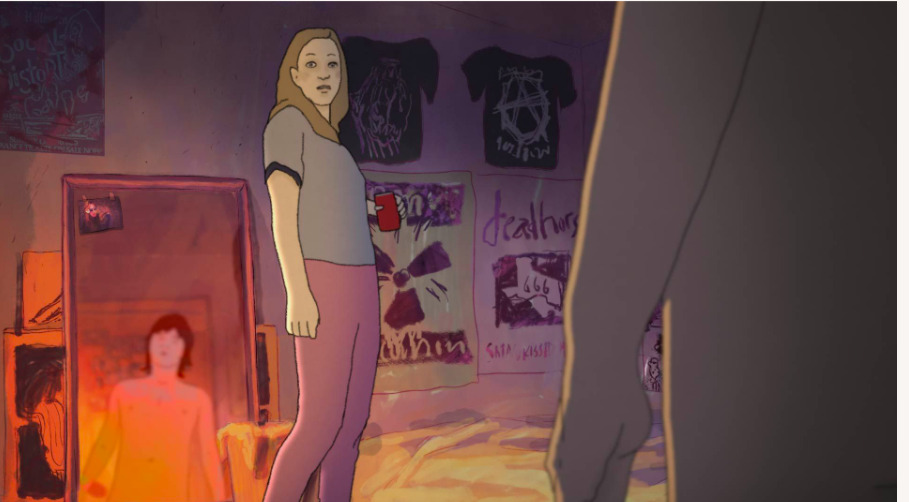 Each episode/segment of the project pays homage to a different movie genre. “Pam had written all the different genres into the script, and when I read it I immediately linked the genres with some of my favorite animation artists and they all agreed to work with me on this,” says Gunnarsdóttir. “It was so much fun being able to give each of them some parts of this film to lend it their personal style. Our animators are Josh Shaffner, Grace Nayoon Rhee, Amanda Bonaiuto, Isabelle Aspin and Brian Smee, Kevin Eskew and Cassie Shao. Since I was also in this unique position of working with a small group of fantastic artists, it was easy to give them some creative freedom when it came to the overall style. Instead of being too concerned about character design I wanted the artists to put feelings into the drawings. The rule of thumb was, if you can see the actor in the drawing then I’m happy.” 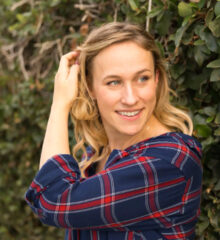 “I learned so much from working in a 2D pipeline. It felt like I was back to making theater with people I was in total awe of, just quietly making something nobody knew about and we weren’t sure anyone was ever going to see.”

Gunnarsdóttir worked closely with Ribon and producer Jeanette Jeanenne for a little more than a year and half on the production. “I was sitting in Brooklyn most of that time, but it was made in everyone’s living rooms,” she says. “All the animators were using TVPaint. Kevin Eskew had made this custom-made pencil tool in there for everyone to use and it gave it a very beautiful line. Kyle Brooks, who colored the whole film for us, was doing that in TVPaint as well.

The only animation that is not done that way was the sequences that I did myself, but I’m still a slave to the paper. We then comped it in After Effects. My husband, Ethan Clarke, did that so beautifully. I edited the project in Premiere.”

“I’m very proud of how we did something very cinematic with animation that allows you to get lost in the story,” says Gunnarsdóttir. “Pam’s writing is so good and personal and full of heart and it was important to me that we stayed with young Pam in those moments of adolescence.” 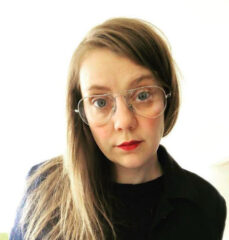 “Don’t wait for permission from someone to make your film. Find the time and the resources you have at hand and make it!”

Of course, there were many challenges along the way, but Ribon says that’s what made the project so exciting. “We came from very different backgrounds,” says the writer. “I came from a giant CGI conglomerate company where there are hundreds of people and thousands of notes and the writing is done on the fly well into production; and Sara, who is working on paper and has a handful of artists as crew. It didn’t take long to adjust and compromise, but I know at first we were both a little like, ‘But this is how I do it, though!’ I learned so much from working in a 2D pipeline, and while it was all new, it felt so familiar. It felt like I was back to making theater with people I was in total awe of, just quietly making something nobody knew about and we weren’t sure anyone was ever going to see.”

“There was a joyous, youthful freedom in this project that came from getting to make something so honest,” adds Ribon, who is a big fan of Liquid Television and the works of Richard Linklater and Mike Judge. “Wait, was I talking about challenges?!” And what does she like best about working in the shorter format? “You can tell it’s going to work much sooner,” she quips.

Gunnarsdóttir says her biggest animation influence is Masaaki Yuasa (Inu-oh, Lu Over the Wall) and his masterpiece Mindgame, in particular. “I seem to go to this film for inspiration for every project,” she says. “I also love filmmaker Satoshi Kon and his editing is very inspirational to me.”

The two talented filmmakers are also great about sharing tips for other animation hopefuls. “Just do it!” says Gunnarsdóttir. “Don’t wait for permission from someone to make your film. Find the time and the resources you have at hand and make it!”

“That being said, be patient in finding your team,” adds Ribon. “Just because they say ‘yes’ doesn’t mean they get what you’re imagining. You’ll all turn it into something entirely different together, but it’ll be the best version of what you thought you were trying to do. And then maybe you’ll make someone in an audience cry while they’re laughing, and there’s absolutely nothing better.”

“Also, save everything,” Ribon believes. “It’s not hoarding if you make it art!”