One of the most memorable images from Netflix’s highly original animated feature Wendell & Wild is that of the film’s feisty lead Kat Elliot (voiced by Lyric Ross) blasting her dad’s boombox in the hallways of her all-girls Catholic school. Not surprisingly, music plays a big role in the film’s dynamic creative mix, so we were thrilled when the film’s brilliant director Henry Selick and talented music supervisor Rob Lowry (Bros, The Lost City, Gossip Girl) answered a few of our questions about the art of curating its Afro-Punk soundtrack:

Animation Magazine: Henry, can you tell us a bit about the key role the film’s songs play in the film’s narrative? What were you looking for to complement Bruno Coulais’ score?

Henry Selick:  Bruno Coulais’ score is moody, magical, very emotional, with a touch of playful humor for demon brothers Wendell and Wild. The needle drop songs serve as counterpoint to Bruno’s score, each song carefully chosen for the character and moment to give a jolt of energy and lift spirits, show a sense of rebellion, make things more fun. One song — “The River” — is used for an opposite effect, offering a deep well of soulful sadness to accompany Kat’s first visit to the site of her parents’ fatal accident.

Rob and I knew that the punk songs offer more than energy and rebellion; they show the deep connection between Afro-Punk Kat and her father, Delroy, a first gen Black Punk fan. It fell to Bruno to make room for the songs and he did so brilliantly: rewriting a lot of his score, re-orchestrating with more percussion and different instruments and vocalizations. And his flexibility in making these changes up to the last moment was remarkable.

Rob, congrats on delivering one of the most distinctive and original animation soundtracks of the year. Can you tell us how you got involved with the project?

Rob Lowry: Thank you! So, I was brought onto this project about three years ago — I had worked with producer Ellen Goldsmith Vein a couple of times. At that point, they were still storyboarding stuff but they had some animatics. Obviously, music is such a big part of the film and with animation you have to get started early on, so we had a conversation back in the fall of 2019. So, Ellen brought me on and then we hopped on the call with Henry and just kind of hit the ground running from there!

What was it about this very different animated movie that really stood out for you?

I mean, you just look at the names of the people involved. Obviously, I have been a huge fan of Henry’s, growing up with Nightmare Before Christmas and Coraline. I also think everything Jordan Peele and Monkeypaw touch is incredible, everything Monkeypaw does. I also have a really good relationship with Netflix and have worked on a lot of projects for them. This project gave me the opportunity to work on my first animated film, and my first stop-motion film as well, so it was all very exciting for me. It helps you create the narrative and the storytelling with music.

What kind of research did you do to come up with the film’s wonderful overall Afro-Punk vibes?

Henry has a deep knowledge of music, and the movie opens with a Fishbone song, and he had directed a Fishbone music video years ago [“Party at Ground Zero,” 1985]. We talked about some of the iconic bands of that era and tried to figure out whether this is from Wendell and Wild’s perspective or Kat’s perspective? We also had some Motown stuff at that stage. As the film developed further, Kat took center stage, so we filled out the soundtrack with thing that she would like as well as things that her parents would listen to, since her dad left her his boombox. It was fun to dive into that world since I haven’t seen a lot of projects that are able to highlight these types of bands.

Everything that Henry does is so unique and individualistic in terms of his approach. So, the challenge for us and for Henry was, how do we also create a unique soundtrack? And obviously you did that with the beautiful score by Bruno Coulais. You can also discover a bit of sonic continuation from Coraline in addition to the Afro-Punk vibe of chaos and rebelliousness to the mix.

The soundtrack features a wild collection of songs and performers, from Fishbone, X-Ray Spex and The Specials to Big Joanie, Death and Living Colour. How did you pick these specific artists and songs?

The way it works is that we get a lot of things in the beginning, and then you kind of narrow it down to songs that you know you all loved and that worked best in the film. We found ourselves highlighting prominent artists that perhaps not been given as much commercial space and were not as well known. Even a few months before the mix we were still kind of kind of toying with different ideas, but for the most part I don’t really think we made any compromises or sacrifices. We were able to get everything that we wanted and that that Henry was really excited about.

Where there any tracks that you were especially proud to feature in the movie?

I have to say “Ghost Town” by The Specials. I love that song and it’s such a needle drop. I always love, like, the first couple of songs because it always feels like sort of a like a sonic thesis statement. I also love the TV on the Radio song (“Wolf Like Me”) because it was awesome to be able to get them into the project. I love the Big Joanie song (“Fall Asleep”). I love that we got to use Tamar-kali’s “Boot” in the end because she’s just such an iconic artist and composer.

What would you say was the biggest challenge about working on an animated feature as opposed to all the live-action material you work on?

I think the pacing of it all is really interesting because, you know, when you’re working on TV it’s very quick and you’re turning stuff around and there’s a definite air date. You can kind of see the finish line. With an animated film, it was different as we would work pretty intensely on it for two weeks or three weeks and then not hear anything for two months or three months. They can change what they’re doing in real time to develop or evolve the arc of a character or storyline. It wasn’t necessarily easier or more difficult. It was just kind of fun to work that way to spice things up.

Do you have any tips for newbies who want to get into music supervision for film or TV?

I think one thing is that you have to be really passionate and love music and film and television. There are some great classes out there. I always tell people to learn as much about music publishing as you can because getting clearance, paperwork and administration is such a big part of our job.

I mean, Wendell & Wild was one of those projects that, certainly, when I was asked to do it, it was a “pinch me” moment, because I remember going to the theaters to see The Nightmare Before Christmas and Coraline. I was so blown away by Henry and his filmmaking expertise, so I’m just really grateful to have been a part of it with everyone on the team. I feel like this is a good proof of concept just how powerful music can be in these animated films and how you can how you can use music in nontraditional ways and to integrate the songs as part of Kat’s narrative. It’s really the dream scenario as a music supervisor when the music is so beautifully intertwined with the story.

Wendell & Wild is currently streaming on Netflix. You can listen to the official soundtrack on digital platforms including Spotify and Apple Music. 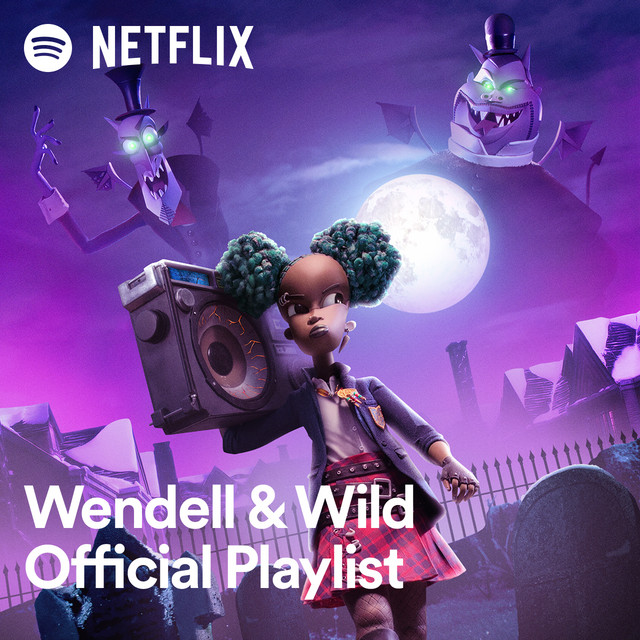