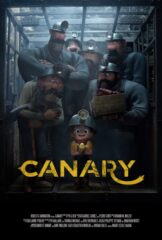 The classic story of “the boy who cried wolf” is refitted into a modern, CG-animated tale of unlikely friendship and tragic loss in Canary, one of the year’s Oscar-qualified shorts. Centering on a child coal miner in 1922, the film has screened at festivals all over the world, competing at TIFF, SPARK Animation and picking up awards at the Warsaw Film Festival, Images en Vues, BIAF, Piccolo Festival Animazione and Pontarlier.

Canary is produced by Quebec’s Rodeo FX, where the team was led by directing duo Benoit “Ben” Therriault and Pierre-Hugues “PH” Dallaire — experienced animators whose work has featured at Annecy (IGA spots Share The Joy, Vraiment Frais and Aide Gourmet) and earned accolades including Vimeo Staff Picks (Share The Joy), an Honorable Mention at the Queen Palm International Film Festival (Lotto Max – Bear) and a CREA Award (MSSS – Smoke). Here is what the directors had to say about their decade-long passion project:

Animation Magazine: Can you tell us a bit about how this animated short project came about?

PH Dallaire: The idea appeared over 10 years ago (August 12, 2012 — thank you iPhone notes). We’d been directing animated commercials and short shorts for about 15 years at that point, but our passion had always been inventing our own original stories. Once we got talking about Canary, we knew we had to make it, and luckily we found a home for our talents, and our story, at Rodeo FX. We gathered a team of our best long-term collaborators to help make the film (some of them even left their jobs to join us) and here we are today, screening at festivals across the world. The film is the culmination of many people’s trust and belief in what we were trying to build and say.

What were your inspirations for the piece?

PH: The fact that canaries were used in underground coal mines as late as 1986 was certainly a starting point for the idea. But the seed wasn’t truly planted until we thought of also having a child miner caring for the canary because they both want the same thing: to be free and play above ground in the sunlight. Individually they are very vulnerable, but together they have a fighting chance. For Ben and I, at its core, Canary represents that friendship and it’s the heart of the film.

PH: Production took about 15 months with approximately 15 artists as part of the core team. At the very start it was just Ben and myself, but over the course of the production, nearly 50 artists made contributions to the final result. Technically, it would have been possible to accomplish the film faster, but we were implementing a completely new pipeline and gradually growing the team which meant slower results but a solid structure.

Which animation tools were used to create the animation?

Ben Therriault: The majority of the film was created with Houdini software using Solaris, which allowed us to create a USD pipeline: scene assembly, shading, groom and feathers, lighting and renders were done in Houdini, including some rigging prototyping. Character rigging and animation were done in Maya, with animBot as a popular tool for the animators.

What do you love best about the final results?

PH & Ben: We love that we created a story that would otherwise not exist. We love that when people see the film, they believe in these characters and we’ve contributed to the longstanding magic of animation.

We love that people are deeply touched by this story. We love that there’s an appreciation for the level of craftsmanship in the film. We love that during the creative process, there are compromises to be made but we trusted the process and trusted our team of gifted artists, and our little idea became a reality.

This is a very biased take of course, because it’s our film, but we would have loved to see this film when we were kids! We think that just means we stayed true to what attracted us to the idea in the first place.

PH & Ben: Our biggest challenge was finding a way to make Canary. It was a 10-year journey from initial concept to screen. During that time we were always keeping an eye out for any opportunity, any way to make it happen. We want to sincerely thank [executive producer and studio CEO] Sébastien Moreau and Rodeo FX from the bottom of our hearts for finally giving it to us —filmmaking is not an exact science, but there was tremendous mutual trust and respect from the very start.

Then there was the challenge of building a cutting-edge pipeline while simultaneously making the film, a bit like building a plane in mid-flight.

Ben: I’ve been a fan of Disney films as far back as I can remember. I would draw all the characters when I was a kid. Comic books were my other passion, and for a while I drew superheroes. Miyazaki’s work is an inspiration to me as an artist and has influenced my drawing style. Seeing the film My Neighbor Totoro made me realize I wanted to tell my stories using animation, that I wanted to direct films just like him one day.

PH: On my end, it started with the National Film Board (NFB) short films in Canada, which I first discovered at a museum as a child. The Cat Came Back by Cordell Barker, Bob’s Birthday by Alison Snowden and David Fine — these are animated classics that everybody can enjoy. The classic Pixar shorts and films. Miyazaki, particularly Porco Rosso and Spirited Away present such eye-opening imagination and a pacing and style which felt so different, in the best of ways.

What would you like audiences to take away from the short?

PH: I believe that anyone’s interpretation of the film is as valid as mine, but the meaning of the film has evolved. For a long time it was about hope, but it also deals with loss and recovery from it. During the journey of getting the film made, both Ben and myself lost loved ones — my cousin, my best friend and my uncle…

Ben: …My childhood friend, Pete. Some of our early supporters, who believed so strongly in what we were trying to do with this film.

PH: So for us, it was important that the film dealt with that grief in a way that felt real, because we wanted to make sure we properly honored those we had lost and we wanted our characters to be genuine and true to life.

Ben: The friendship we see onscreen between the boy and the canary is special and, as filmmakers, there are always parallels between our films and our lives. PH and I know each other so well and have been working closely together for many years. We know firsthand what it means to support and to inspire one another, and appreciate how we push each other out of our comfort zones.

PH & Ben: We’re going to keep telling stories together through animation. Unfortunately there isn’t much we can reveal beyond that at the moment, but we definitely look forward to telling a longer story next time.

Any tips for young animation fans who would like to make their own shorts?

PH & Ben: There’s a lot to be said about persistence. We took a big detour along the way, but we persisted and remained focused on our goal, and eventually we made it happen.

There’s also practice, even if you’re not doing your own film immediately, there’s so much to learn about animation and storytelling that will help you make your best film when you get a chance. We directed commercials for 15 years and it was difficult, but we learned a lot and it kept us sharp for when the time finally came.

Finally, there’s just going ahead and simply doing it. CG animation can be daunting because there’s so much to master, and it can be very time consuming as it often involves larger teams. But what about stop-motion animation? Or hand drawn? There’s simpler ways to get started and get better right now. Why not shoot a live-action short film with your friends and your phone’s camera? It’s a great way to get started today.

Learn more about Canary, the filmmakers and Rodeo FX at rodeofx.com/canary.