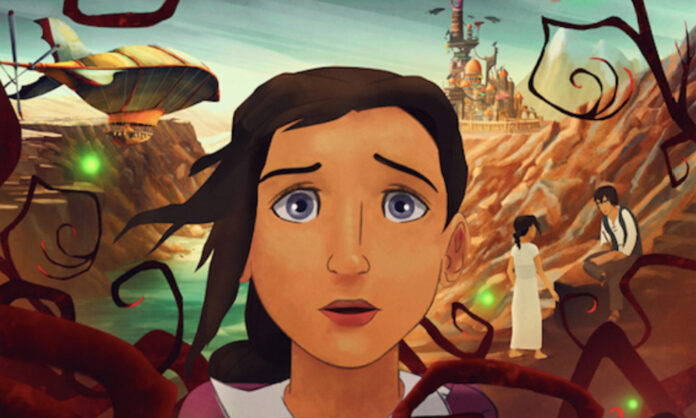 North American audiences will finally be able to catch the animated feature Lamya’s Poem thanks to Allen Media Group’s Freestyle Digital Media, which has acquired the DVD and VOD rights to Alexander Kronemer’s animated feature which first premiered at Annecy in 2021.

Lamya’s Poem centers on  a 12-year-old Syrian refugee girl named Lamya who enters a dream world where she meets a poet and must help him write the poem that will save her life. When Lamya flees the violence of her country, she is given a book of poetry by the famous 13th-century poet, Rumi.

The 2D-animated movie  was written and directed by Kronemer, who also produced the film with Glenn James Brown and Sam Kadi. The voice cast includes Millie Davis as Lamya, Faran Tahir as Baha Walad and Mena Massoud as Rumi. The animation was produced by PIP Animation.

“We were inspired by accounts of displaced Syrians reading poetry and literature in refugee camps to help overcome the trauma of their displacement from home, friends, and family,” says Kronemer. “At its center, Lamya’s Poem is about the magical relationship between artists and their audiences that can cross time and space to help both heal and transcend difficult circumstances. While rooted in loss, the film ultimately is a life-affirming and family-friendly tale.”

The film will be available to rent/own on digital HD internet, cable, and satellite platforms starting February 21, 2023.