Momo Wang, who is best known as  the creator of the popular bunny character Tuzki and as an animator/creative director at Illumination Entertainment, is in the spotlight again this year for writing and directing the acclaimed new short titled Penglai. Narrated by Scarlett Johansson and produced by Illumination, Chis Meledandri and Gail Harrison, the dazzling short mixes traditional Chinese art and imagery to tell a powerful story about the human spirit. Wang was kind enough to answer a few of our questions about her intriguing new short:

Animation Magazine: Can you tell us a bit about the origins of the project and your inspiration?

Momo Wang: The idea of Penglai as Buddha’s mythical home is based on traditional Chinese lore. In fact, the actual city of Penglai is the place of magic and immortals in many Chinese stories. Penglai is my grandparents’ hometown, and I grew up hearing these stories.

I wanted to reinterpret one of these stories in a modern way for a new audience. Many Asian art forms and stories are still unfamiliar to Western audiences. Yet, these stories share themes and values common to all of us. Penglai is a familiar tale of one man’s driving pursuit of a mythical place. He’s faced with war, magical creatures, and an alien. It’s an epic and cautionary tale that I felt was relatable and relevant today.

I started thinking about Penglai when I was earning my MFA at CalArts. For my graduate project, I created a short version of the film. After graduation, I was introduced to Chris Meledandri, the CEO of Illumination. I showed him my short, and he liked it. Illumination wanted to produce Penglai. And they also offered me a job in their marketing department. I was honored and knew I would learn a lot working on their big films.

As an animation and creative director at Illumination, I was busy working on creating original animations and content for the company’s film franchises. At the same time, I worked relentlessly for about six months on developing Penglai. I modeled characters in wire and clay, hand-painted hundreds of layouts and storyboards, and worked with a Chinese master to make traditional shadow puppets. I work in a very organic and visceral way. Employing different media types helped me envision the film and block out the scenes before we started on the 2D animation.

Actual production took about two years because of COVID. We originally scheduled about eight months due to the highly complex, frame-by-frame animation we were doing. But the pandemic created havoc and multiple delays. On top of this, I was working at all hours because my teams were based in the U.S. and China.

To my horror, in post-production we discovered that we were missing two animation files. By this point, it had been nearly a year since animation production was complete and the team was disbanded. We had to track down the original animation artists and have them re-export the missing files. Thankfully, it all worked out.

We used Adobe Photoshop, Animate and After Effects, as well as Moho and Avid. Most of the shots were drawn frame-by-frame in Photoshop. I also used Animate for a few shots because I had been already using the software for many years. My animation team used Moho for shots requiring textile details and smoother motion. We then assembled all shots in After Effects and edited the film in Avid.

I employed several practical elements like brush and ink paintings, shadow puppets and models to develop ideas and scenes. We photographed the paintings and scanned the shadow puppets into the computer as key frames and templates for the animation work that followed.

How many people helped on the project? Was it produced by Illumination here in L.A. or in France?

Our team was about 80 people, which still amazes me today as I think about it. The core Illumination team in L.A. included me, the producers, the editor and a few other key personnel.

I worked with One & All Animation Studio in China, which had about 50 animators working on the illustrations and animations. The soundtrack was composed here in the U.S., with musicians and DJs based in the U.S., China, India and Japan. Other post work like sound and color mixing was done here in the U.S.

How did Scarlett Johansson get involved with the project?

The film follows the epic life quest of a fisherman, so we started out trying a few male voice actors. But somehow it didn’t feel quite right. Illumination had worked with Scarlett Johansson on Sing, and I was honored that she agreed to voice the narration.

What is your favorite Illumination movie and why?

That’s a difficult question. But I think my favorite Illumination movie is Sing. The movie is about an eternal optimist who has fallen on hard times. While his world is crumbling around him, he sets his heart on a mission, And the world shows up to help. It’s a reminder to me that if you don’t try, you’ll never know.

I think my earliest spark for animation was when I was about four years old. I painted a picture of goldfish and hung it on my wall. When I awoke in the morning, the fish were swimming across my walls.

Working in animation is an evolution I’ve been on since I was a child. My mom worked multiple jobs to support the two of us, so I was left to my imagination and creativity. In school, my main studies were fine art drawing and painting. I also had a collection of over 200 manga. And I would watch anime whenever I had the chance at a friend’s home. When it came time to go to university, I was fortunate to attend one of the best animation programs in China. And I’ve never looked back.

What do you love about working in the short format?

Short films often require more plot twists and turns compared to feature films. Plus, you have a very limited amount of time to tell a whole story and complete the climax. Production cycles are shorter and often allow for more experimentation in story and style. As a result, we’re seeing more and higher quality shorts coming to market that play very well in streaming and across digital media. 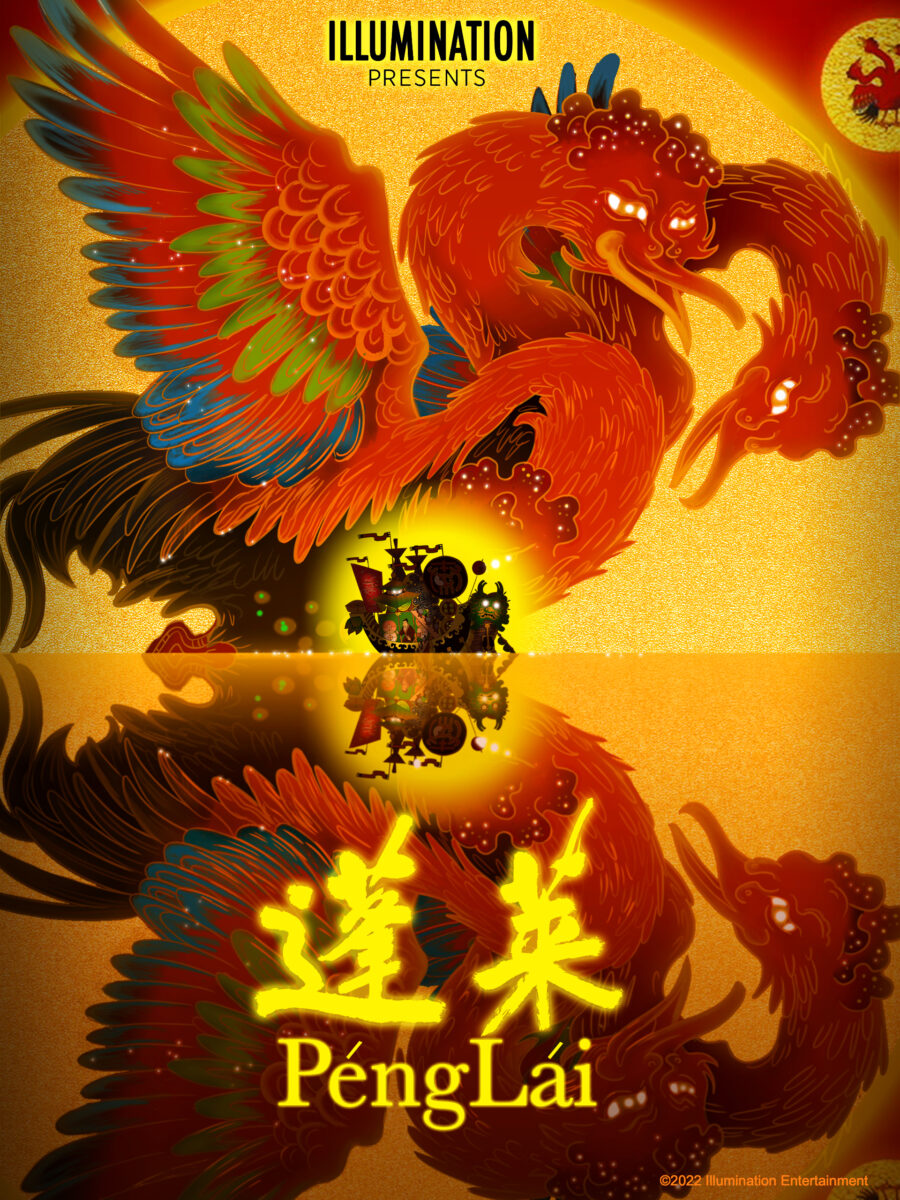 Who are your big animation heroes?

I’m a big fan of the director, writer and animator Masaaki Yuasa. I love his unconstrained animation style and find it inspirational. I also love Katsuhiro Otomo’s grand worldview and science fiction elements. Most people probably know him as the creator of Akira. I admire his manga and anime work. I had the pleasure to meet him once and was impressed by his humility. Finally, attending CalArts was a lifelong dream of mine. The school’s founder, Walt Disney, is my hero.

What do you hope audiences will take away from the short since the ending is wonderfully ambiguous and mysterious?

The film’s ending is both decisive and mysterious. The fisherman meets his fate where his journey started many years before — in search of Buddha’s mythical island home and his encounter with a mystical being. As it happened for the fisherman many years before, the sky bursts open with multicolored lights. People look up in amazement as they try to save the fisherman. Perhaps the mysterious lady has returned. Is it Buddha or some other-worldly being? I leave it to the audience to decide.

What was the biggest lesson you learned during the making of your beautiful short that you can pass on to future short filmmakers?

Directing is all-encompassing and a learning process. You are a creator and a leader that’s involved in every step of the process, from concept through promotion. You bear a lot of responsibility. I was very fortunate to work with talent who are masters in their respective fields. Through the pandemic, I had to learn how to manage the complexities and persevere through the challenges while staying true to my vision. Ultimately you must prepare, do the hard work, and believe in your team.