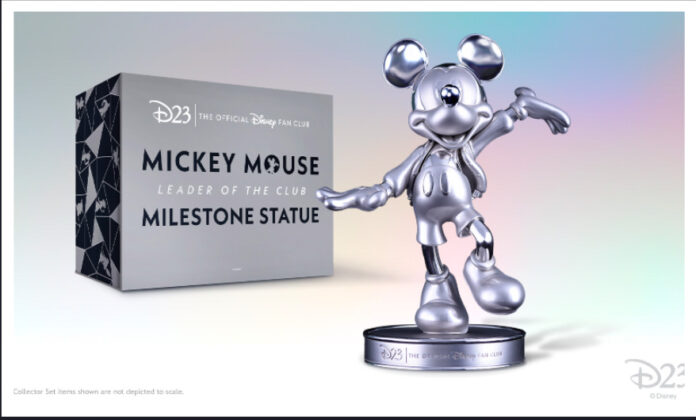 Disney fans will be able to own a special Mickey Mouse milestone statue when they sign up for D23 (Official Disney Fan Club) membership in 2023, beginning Jan. 1. The special Gold Member Collector Set, which was initially introduced at the D23 Expo last summer, celebrates 100 years of the studio with the new Mickey Mouse “Leader of the Club” statue, designed by artist James Fauntleroy in partnership with Gentle Giant Studios.

Designed as a reflection of Disney’s past, present, and future, artist and Grammy-winning music producer James Fauntleroy brought a “platinum pop star” tribute to Walt’s loveble mouse with a stylish varsity jacket featuring the 100 Years logo and flair paying tribute to Mickey’s own fandom for some of Disney’s most incredible stories. An oversized version of the Mickey statue was unveiled at D23 Expo, the celebration’s kick off, and now D23 Gold Members have the opportunity to bring home the magic with this exquisitely crafted 10-inch statue.

In addition to receiving a commemorative member certificate, for the first time ever, all new and renewing D23 Gold Members will have the opportunity to choose one of four unique membership card designs showcasing the thrilling worlds of Disney, Pixar, Star Wars, and Marvel: