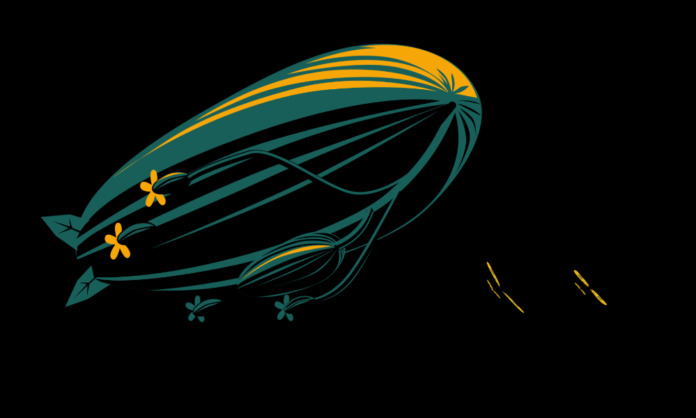 The new Polish short Airborne, which is directed by Andrzej Jobczyk and produced by Jakub Karwowski and Piotr Szczepanowicz at Letko studio (Odo, Moomins and the Winter Wonderland) has been making waves since it premiered at the Clermont-Ferrand International Short Film Festival and Anima – The Brussels Animation Film Festival earlier this year. The highly imaginative 2D short connects the world of flying machines with the mysterious realm of flora and fauna and explores what we have to lose to be born again.

We recently had a chance to interview the talented young director about his highly original short, and here’s what he told us:

Animation Magazine: Can you tell us something about the origin of this short film?

Andrzej Jobzsyk: The inspiration behind this piece was my childhood. I grew up among nature, and as a kid, I loved airplanes and everything related to aviation. Now, the film’s central theme is the fusion of flying machines and nature. I often dreamed that an aircraft crashed in the meadow near my house. It turned out that my brother had a similar dream. There was something magical about it for me. In my film, the motif of the wrecked fighter jet stuck in a tree becomes the seed of a new life.

When did you start working on this project, and how long did it take?

We started in 2019, although the first animation combining flying machines and nature was created in 2007 as an exercise in film school. Back then, I made a short animation about an airplane that, like a butterfly, hatches from a cocoon. The idea would mature in my head for 12 years. In the meantime, I was creating illustrations for the whole film universe, which I later glued into one story. The short itself took about two years to complete. Although I think it could have been done faster. I just needed to take breaks to recharge my batteries.

How many people worked with you on this short, and what animation tools did you employ to create it?

I was responsible for the entire visual layer of the film — graphic design and animation. As for the technique, it is based on vector graphics. I would also use a 3D camera to build a master shot flight scene. I needed help with editing and sound production. Studio Letko put me in contact with top professionals. I was lucky to work with a great editor Nikodem Chabior, who reduced the film to the very essence of the story and gave it a new rhythm. Michał Fojcik created wonderful sound effects. He made it possible for conceptual graphics to become sensual and alive.

My producer, Piotr Szczepanowicz (Acid Rain, Room, Even Mice Go to Heaven), an animator who acted as an artistic supervisor in the project, also had a big part in the undertaking. Throughout the production period, I had his support in the form of valuable advice and suggestions.

What were your big visual inspirations for Airborne?

While working on the series of illustrations that became the basis for creating the Airborne universe and story, I was very impressed by Codex Seraphinianus, an art book by Luigi Serafini. It depicts a world of beings that are fantastic hybrids. Everything is presented in the style of an illustrated encyclopedia, which suggests that everything in there truly exists.

The art of ambiguous beings appeals to me greatly because of my work in applied graphics. For a certain period of my life, I created trademarks and posters. In this type of work, the ambition to encode two ideas in one figure is particularly desirable. When I wasn’t thinking of this project in terms of a film yet, I wanted to screen-print the images. This is why the color range of the film is limited to three colors, and there are no tonal transitions.

Airborne is based entirely on your creative vision — the script, direction and animation — but ultimately, films are a team effort. How many people worked on this short;  how did the Letko team support you?

Letko supported me at every stage of production. When I approached my producer, I only had a set of illustrations. There wasn’t even a general story yet, let alone a script, much less a storyboard. Despite this, Piotr and Jakub trusted me, and they saw the potential for a film in these miscellaneous illustrations. Jakub helped organize the necessary documentation and supported me during pitching when we applied for funding. On the other hand, when the film’s production phase was underway, Piotr recommended and contacted me with great professionals — sound director Michał Fojcik and film editor Nikodem Chabior.

I edited the first version, but it lacked clarity and proper rhythm. That’s when Piotr suggested I enlist the help of Nikodem Chabior, who, in addition to feature film forms, also edited music videos, among others, for Radiohead, and it was a Thom Yorke song that was used as a reference for a music video sequence in Airborne. Nikodem brilliantly re-edited the piece and made the film more dynamic. He cut down the initial eleven minutes to seven and a half. For me, an animator who had animated the removed fragments, it was a bit painful, like an amputation. Still, the procedure paid off. The most saturated essence of the film remained.

On the other hand, Michał Fojcik created a beautiful sound layer. The visual layer of the film is based on very conceptual solutions, and the sound adds a lot of sensuality. A challenge for Michał was developing sounds for the fantastic creatures, which are both biological and mechanical. Not everyone can imagine what a butterfly with an engine would sound like…

What was the role of Piotr Szczepanowicz, the artistic supervisor?

Piotr helped a lot in maintaining the original concept of the film. I was returning to animation after a break of several years, and I wasn’t all that sure of myself. Piotr helped me solve dilemmas related to the film’s narrative. Sometimes he knocked silly ideas out of my head. It’s a challenge to work a couple of years on a project and hold on to the original emotions that came with the excitement when the idea was created. There were times when I lost my distance, and then I would rely on Piotr’s advice.

I had much confidence in Piotr. Earlier, he supervised the production of a film by Tom Popakul, a friend of mine from film school. The result was Acid Rain, a great piece that also became a big festival success.

What were the biggest challenges you had to face?

Airborne was first created as a series of illustrations that presented an unlikely combination of airplanes and biology but did not have a coherent story yet. So, the first challenge was finding an idea to combine these images into a single story. When I turned to Studio Letko, all I had was the art, and it turned out that the deadline for film applications was two weeks away. I had to come up with a script quickly. The pressure spurred creativity. I managed to create the first version of the script, and I got the film grant. The next challenge was to stick to the film’s original concept in the face of an inflow of new ideas. At this point, the support of Piotr Szczepanowicz — the artistic supervisor of the project — was very helpful.

Which animator do you truly look up to? Who influenced you the most?

When I was still studying animation film at film school, one of our lecturers showed us films made by Bill Plympton and Jan Švankmajer. I love this kind of surreal sense of humor. I won’t be very original if I say that I also love Hayao Miyazaki’s animations. His The Wind Rises is the best animated homage to flying machines I’ve ever seen!

What do you like about working with short forms?

A smaller production offers the possibility of greater artistic independence. A short film does not have to meet commercial goals. For the most part, it is intended for festival audiences. In addition, this form allows for intimacy in my work. I tend to be a loner, and the necessity to control a larger team of people would be onerous. With the short form, I can complete many tasks by myself.

Can you tell us something about the music you used in the short?

At a certain point, the style of the film resembles a music video. I am referring to the scene of the flight across the world that’s changed. I wanted a soothing melody to complement this moment. While I was watching Suspiria, I heard Thom Yorke’s song “Unmade.” What a beautiful piece! I used it as a musical reference for my film. I chose Rafał Smoliński and Jakub Słomkowski as composers and performers of the music. Jakub’s musical project IKAR 2 captivated me at one time. It was a performance in which he sang while suspended on ropes among dangling instruments. All this levitated over the audience to the accompaniment of soothing music. This was why I chose this particular artist. Jakub Słomkowski and Rafał Smoliński created an equally beautiful and soothing melody as “Unmade,” but still, these two pieces are entirely different. 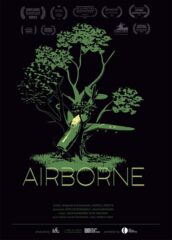 What do you hope viewers will get out of Airborne?

I would like the viewers to walk away with a feeling of lightness and hope. The film is about evanescence and rebirth. A lot of people who have watched Airborne point to the ecological aspect of the film and the poetic manner of portraying war. These two themes have become very topical today. Airborne is a synthesis of nature and technology. I would be happy if it were perceived as inspiring to grow in harmony with nature. As for the theme of war, it was not my intention to create an overtly pacifist message. I think the best remedy for violence, including global violence, is solace. Most of us are locked in mental armor and fight a battle with the world or ourselves. Only a significant defeat can cause our hearts to finally soften. The fighter jet in the film symbolizes this phenomenon. Only when it falls, it transforms from a fighting machine into a fragile being. I wanted to revive what was dead and soften what was hard. I hope most viewers will feel this.

I have another animated short planned. Its working title is Pattern. The piece will be about surreal psychotherapy. It will present treatment with leeches that suck traumas out of the patient. I’m happy because I just found out yesterday that the Polish Film Institute awarded this film a grant.

Find more information on the film at airborneshortanimation.com. See additional work by Letko at letko.co.

You can watch Airborne in full below: