Two of toondom’s most beloved characters are embarking on a very different type of neku and nezumi game in the first-ever Tom and Jerry anime. Announced by Turner Japan timed to Japan’s “Cheese Day” celebrations (Nov. 11), The special collection of shorts launched on Cartoon Network locally, marking the first project starring the cat and mouse duo to be produced in Japan.

While the shorts carry over the “speedy and humorous action” and “good-natured fights” of the classic William Hanna and Joseph Barbera cartoons, which first debuted over 60 years ago, Tom and Jerry‘s Japanese adventures are presented through a candy-colored, ultra-kawaii lens with cutesy new character designs.

The episodes as give our heroes new magical powers. Per Turner Japan: “Tom, a fussy cat who can’t be hated; Jerry, a cute by clever mouse and Tuffy [a.k.a. Nibbles], a small and cute mouse, all transform into adorable characters, such as their favorite food.”

As SoraNews24 points out, the Tom and Jerry anime’s made-in-Japan status is also marked philologically in the Japanese title. While “Tom and Jerry” as foreign names would typically be written using the katakana alphabet, this iteration is written out in the curvier (and sometimes considered “cuter”) hiragana, generally reserved for Japanese names and words: とむとじぇりー. 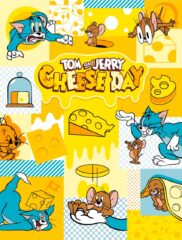 The shorts launched alongside several Tom and Jerry licensing collaborations and promotions for Cheese Day 2022. Established in 1992 by Japanese cheese industry associations, the event celebrated its 30th anniversary this year.