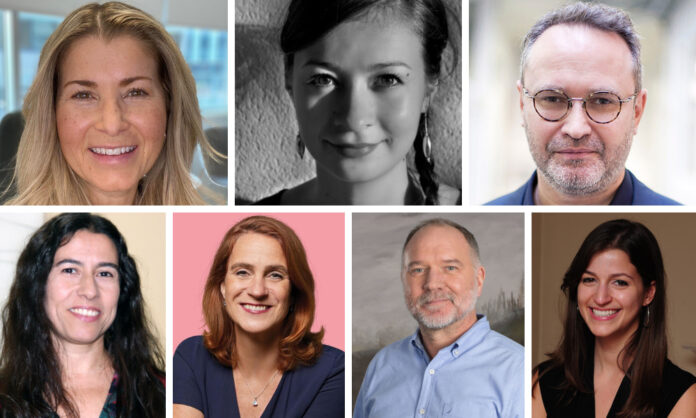 M2 Animation, the award-winning studio behind multiple LEGO series, two new series for NBCUniversal and animation for Warhammer 40K and Age of Sigmar, announced that Kylie Ellis will be joining the studio December 1 as Head of Production. “Being part of dynamic growing businesses is truly exciting,” Ellis said. “I am thrilled to be part of the M2 team, who are doing extraordinary work.”

Ellis, formerly VP Production at WildBrain and a supervising producer and production executive for such studios as Mainframe Studios, Wind Sun Sky Entertainment and Spin Master, will be based at the main M2 Animation Studio in Bangkok. She will oversee production at M2’s Bangkok (Thailand), Mumbai (India) and Aarhus (Denmark) studios.

“Kylie is the perfect Head of Production for us as we grow our team of passionate creatives across three studios,” said Owen Hurley, Head of Studio. “Her experience leading high-profile, high-quality productions will make our work even stronger.” Ellis will report to Hurley, who joined M2 Animation from Technicolor earlier this year.

“In Kylie we get an experienced and open-minded leader,” added CEO & Partner, Torsten Jakobsen. “She will help us accelerate our leading-edge use of new tools like those in our Unreal pipeline, while also helping us optimize our CG and Harmony work.”

The Blue Spirit group (a subsidiary of Newen Studios) is accelerating development of its production activity to meet the needs of a growing market. Producing animated series and feature films, with a 2D/3D production studio since 2004, Blue Spirit is also appointing new heads of production to succeed Armelle Glorennec and strengthen its teams.

Glorennec, who joined in 2005, was co-director of the group alongside Eric Jacquot, and the studio’s producer. She has produced all of the company’s projects, including the series The Mysterious Cities of Gold, Loopdidoo, Alice & Lewis, Arthur and the Children of the Round Table and the feature films My Life as a Zucchini, which won two Césars, and Jean-François Laguionie’s films The Painting and The Prince’s Voyage (co-directed with Xavier Picard); this year she was awarded the French Film Animation trophy

Sylvie Mahé joins the group as Producer & Deputy Managing Director. She will oversee all activity and production teams for series and features. She succeeds Glorennec, who has accompanied her since September in this position. Mahé began her broadcasting career by joining the audiovisual subsidiary of the Total Group as financial director of the animation department, alongside Jacquot. Since 2005, through her consulting firm, she has worked alongside animation producers (Blue Spirit, Cube Productions, Technicolor Animation Production, Mondo TV France) on series and feature film projects, as well as on the corporate scope of their activities. In 2018, she joined Mondo TV France as General Manager and Director of Development.

Jacques Romeu comes on board as Producer, bringing more than 20 years’ experience in animation, including 10 years as executive producer in development on some 50 projects (Studio 100, Cyber Group Studios, Superprod). His mandate is to strengthen series production at Blue Spirit Productions by initiating new projects and supporting series already in production or development, including Alice & Lewis (Season 2), Mille Bornes Challenge, The Borrowers and Nightmares Are in Trouble. He will work alongside Artistic Producer Caroline Oustlant.

Justine Francke, who has been a producer at the company since 2021, will take over the Feature Film Production, with Sara Wikler at her side as Artistic Producer. She joined the Blue Spirit Group in 2018 as Legal Director, after several years of experience in international distribution at Studiocanal.

Francke will continue the development of films already underway: The Ballad of Yaya, directed by Hélène Giraud and Thomas Szabo; The Legend of (almost) King Arthur, based on an original idea by director Jean-Luc François; Cut & Run, based on the graphic novel by Chloé Cruchaudet; and Colleen & Amélia by Eric Summer, in co-production with Syon Media in Canada. Two of these films are scheduled to go into production in 2023. In parallel, Justine Francke is also taking over, alongside Folivari, production of the premium series The Baker Street Four, adapted from the comic book published by Glénat.

“The evolution and strengthening of Blue Spirit Productions reflects the creative and commercial ambitions that have driven the company since its creation,” commented Managing Director Olivier Lelardoux. “Sylvie, Justine and Jacques are passionate and talented producers. I have every confidence in their interpersonal and creative skills, as well as their expertise in developing and producing strong and innovative content for a wide audience. I would like to warmly thank Armelle for the incredible work she has done over the years at Blue Spirit and wish her all the best for her future projects.”

Multi-Oscar-nominated Portland, Ore. studio LAIKA (Coraline, Kubo and the Two Strings, Missing Link) has appointed Jeff Stringer to the post of Chief Technology Officer. The announcement was made today by LAIKA President and CEO Travis Knight, to whom Stringer will report directly.

“The fusion of art and technology has been essential to our company since its founding and since 2008 Jeff has been central to that creative effort. As our studio grows, technology is increasingly important to achieving our goals and vision,” said Knight. “The work of our technology teams is more critical than ever before, particularly as they face the challenge of our latest feature, Wildwood, the most ambitious film we’ve ever taken on, which we believe will set new standards for artistic and technical achievement in stop-motion/CG hybrid filmmaking. I can’t think of anyone more able than Jeff to lead us into an increasingly complex and challenging technological future.”

Stringer will head the newly-formed unified Technology Group, which gathers the creative talent and deep resources of the company’s formerly independent IT, Production Technology and Business Systems
departments. This reorganization reinforces the strategic role of the Technology Group as active partners with Production and Business Operations. It will help LAIKA establish studio-wide technology standards, enabling the company to scale up production, modernize operations and usher in new innovations.

With 25 years of experience in the technology sector, Stringer joined LAIKA in 2008. In his capacity as LAIKA’s Director of Production Technology, he led the development of LAIKA’s enterprise digital scheduling system for stop-motion fabrication and stage planning, and in partnership with LAIKA’s Head of Production Arianne Sutner, conducted studio-wide postmortems after each film to capture new production methods and set goals for improvement, among many other impactful contributions. He currently leads LAIKA’s efforts to integrate virtual production and game engine technology into its filmmaking tools.

Suzanne Guèvremont has been appointed as the new Government Film Commissioner and Chairperson of the National Film Board of Canada, following an announcement by the Honorable Pablo Rodriguez, Minister of Canadian Heritage. She succeeds Claude Joli-Coeur, who led the NFB for nearly nine years, and whose term came to an end on November 25. Guèvremont begins her five-year term as of Nov. 28.

Having served as the executive director of major institutions for more than 20 years, Guèvremont is a manager with extensive experience in the fields of digital media, culture and education. She has made a significant contribution to the development of the vibrant 3D animation, video game and visual effects industries in Quebec — specifically in Montreal. She was executive director of SYNTHÈSE – Pôle Image Québec and, most recently, of NAD-UQAC, the college of digital arts, animation and design, where she spent a large part of her career. She has also served on a number of boards, including those of CBC/Radio-Canada, SODEC, the Bell Fund and the Alliance numérique, and is a sought-after speaker on both the Canadian and the international stage.

“The National Film Board of Canada is one of our country’s leading institutions. Through the creative works it produces and distributes, the NFB affirms its role as a catalyst — a role that’s essential to the vitality and intelligence of our civil, cultural, scientific and economic society. Our cultures and our Canadian values — whether expressed implicitly or explicitly — influence our thoughts and our behaviors, and form part of our collective heritage, Guèvremont noted in the announcement. “It is with great pride, enthusiasm and humility that I undertake this mandate. The Canadian landscape is changing, the means at our disposal for creating content are constantly evolving, and so are audience behaviors. I’m very much looking forward to meeting all the teams across Canada, and to working with them in pursuit of our goals.”

Organizers for the Quirino Awards for Iberoamerican Animation announced that Bea Bartolomé will take on the role of Director of the event at the upcoming edition (San Cristobal de La Laguna, Tenerife | May 11-13, 2023). Bartolomé has worked as a producer since the creation of the awards in 2017 and will be replacing José Luis Farias, co-creator and director of the first five editions, who will continue to work with the event as executive producer.

Bartolomé is also the coordinator of Weird Market, now in its 14th year, and a coordinator at Next Lab Generation, a new initiative connecting art and technology in digital content and the animation industry. Previously, she was a producer at Bridging the Gap, an international laboratory for animated full-length films and series, and worked in the production department for various international film events, such as Alcine, LesGaiCineMad, UNIFEST and the German Film Festival of Madrid.

In 2019 and 2020, she was part of the Production Assistance Committee for Full-length and Short Films at ICAA (Spain’s Institute for Cinematography and Audiovisual Art) and worked with the Production Assistance for short animated films in 2022 with Proimágenes Colombia. She has served on juries for various festivals, including Animarkt Stop Motion Forum (Poland, 2021), ANIMA LATINA (Argentina, 2021), Ajayufest (Peru, 2020), Pixelatl (Mexico, 2019) and the Aguilar de Campoo International Short Film Festival (Spain, 2014).

WildBrain has expanded its content distribution team in the Asia-Pacific region, appointing Jason Soh as Global Sales & Channels Director, APAC, and Max Tang as Senior Manager, Content Partnerships, China. In these newly created roles, the pair will support the increasing demand for WildBrain’s kids’ and family content across the APAC region.

Buyers attending Asia TV Forum (Dec. 7-9 in Singapore) are invited to connect with Tyre and Soh at the market to learn more about WildBrain’s hit titles, including brand-new CG-animated content for preschoolers: Teletubbies Let’s Go! plus a new Caillou series and five seasonal specials. Other fan-favorites from WildBrain’s library include Strawberry Shortcake: Berry in the Big City; Chip and Potato; In the Night Garden; Carmen Sandiego; Jungle Beat; Fireman Sam; Polly Pocket; and the live-action hits Malory Towers and Ruby and the Well.

Whelan’s new position starts when she returns to PBS from parental leave.