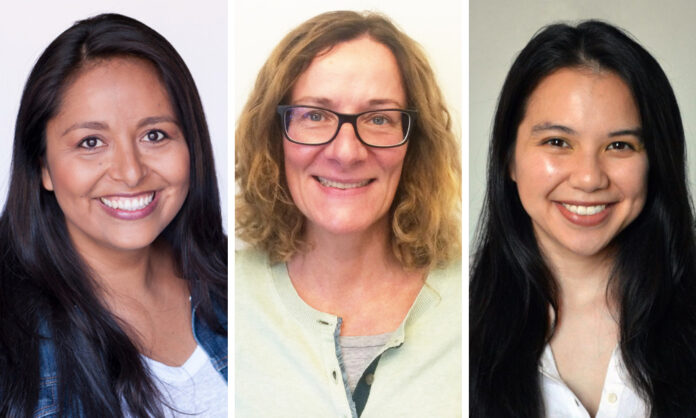 CAKE has announced two new appointments to bolster its development and production business, Ciara Breslin and Martha Sepulveda. “CAKE’s development and production slate continues to grow and we are thrilled that Ciara with her wealth of experience will lead productions on our current and future shows,” said CEO Ed Galton. “We are also delighted to welcome Martha, who brings with her a passion for discovering and nurturing diverse talent and bringing underrepresented voices and stories to light and we look forward to the opportunities she will bring to CAKE.”

Ciara Breslin, formerly VP of Production, becomes SVP of Production, reporting to Galton. Breslin will drive CAKE’s growing slate of co-productions as well as overseeing ongoing and future production partnerships. She joined CAKE in 2020 acting as producer on African girl superhero series Mama K’s Team 4 for Netflix. She brings with her over 25 years experience in animation and children’s television, managing animated series and features for prominent studios around the world including MTV Animation, Hahn Film (Berlin) and Caligari Film (Munich).

Martha Sepulveda joins CAKE’s development team as Senior Development Executive, reporting to Daniel Bays, SVP of Development. In this new role, Sepulveda will lead the creative
development on a number of shows on the CAKE slate, with creators from around the world and in particular those from North and South America. Martha has over 15 years of international experience in kids’ media development and production, working with award-winning companies including Sinking Ship Entertainment and Breakthrough Entertainment and most recently, 9 Story.

Sesame Workshop, the nonprofit behind decades of award-winning educational content, has named Kim Díaz the newest Vice President of Creative Development. “I am deeply passionate about creating educational entertainment for preschoolers and beyond,” Díaz shared. “Growing up in an urban neighborhood in Queens, I remember watching Sesame Street and thinking that it was the only show out there that looked like where I lived. It’s an honor to be a part of helping kids like me see themselves through our beloved characters and brand-new programs.”

As the VP of Creative Development, Díaz will develop and lead the creative development strategy for new long-form and short-form series, specials, and other programming initiatives which align with Sesame Workshop’s mission and creative vision. She will also be responsible for developing and vetting innovative program ideas and genres and identifying and partnering with the right distributor for each property. She will report to Kay Wilson Stallings, EVP of Creative and Production.

Over her 16-year career, Díaz has been a leader in creative producing, writing, and development for educational preschool TV content. In her previous roles at Sesame Workshop, Díaz oversaw the Creative Development pipeline, which includes original series, Sesame Street spinoffs / segments and animated specials for partners such as HBO Max and Apple TV+. Her recent projects include the development of Charlotte’s Web, Elmo Gets a Puppy, The Nutcracker: Starring Elmo and Tango, Elmo & Tango’s Mysterious Mysteries and numerous Coming Together animated shorts. Díaz produced the YouTube short The Monster at the End of Your Story with Grover and Elmo, which was nominated for a Daytime Emmy Award.

Before joining Sesame Workshop in 2016, Kim Díaz served as writer, producer, and puppeteer at Sprout on the Emmy-nominated The Sunny Side Up Show, the only live studio series for preschoolers that ran 365 days a year under both Comcast and NBC Universal. Additionally, Díaz served as writer and producer for on-air promos, branding, and interstitials at Nick Jr. She was nominated for three short-form writing Emmy Awards for Nickelodeon Presents History & Heritage and Dora’s Fantastic Gymnastics Adventure.

BAFTA- and Emmy-nominated creative studio Untold Studios has expanded its film and episodic VFX team with a trio of industry pros joining its team. The shop continues to develop its diverse slate of titles, including The Crown, The Sandman, The Woman King, Ted Lasso, Doctor Who and the forthcoming Sharper for A24/Apple TV+.

Untold Studios welcomes Christopher Gray in the role of Executive Director to oversee all film and episodic activity. Gray joins from Executive roles at MPC and Framestore, working across premium titles including, HBO’s House of the Dragon and Watchmen, Prehistoric Planet and See for Apple TV+, Wheel of Time and The Boys for Amazon Studios and the multi-Emmy award-winning Black Mirror for Netflix amongst others and brings with him deep studio ties.

Peter Jopling joins as Executive VFX Supervisor as creative partner to Gray. Jopling previously worked at MPC, DNEG, Framestore, WETA and Mill Film throughout his illustrious career. He has worked on many of the world’s most celebrated shows including Kick Ass, Scott Pilgrim vs The World, Batman Begins, Harry Potter and the Goblet of Fire, The Golden Compass and multi-Academy Award-winning The Lord of the Rings: Return of the King.

Multi-award-winning independent animation studio Aardman has appointed Lydia Gough as its new Sales and Marketing Manager for Agencies and Brands. She returns to Aardman having previously spent a year in the Brand Team, working closely on properties including Wallace & Gromit and Shaun the Sheep and overseeing global marketing activity. During that time, she led on the marketing campaign for Shaun the Sheep: The Flight Before Christmas.

Gough will be responsible for the ongoing business development of Aardman’s creative services, showcasing the studio’s director and producer talent and world-famous animation techniques to create new opportunities through work for hire as well as content for campaigns linked to Aardman’s character brands. The new role reflects the studio’s commitment to growing work in the Commercials and Interactive spaces and raising its profile within the advertising and marketing industries. She comes to the role with 10+ years of experience at top creative agencies across a broad range of sectors.

Framestore’s London Advertising division continues to grow its roster of talent with the appointment of Guy Lubin as VFX Supervisor.

With over 10 years industry experience, Lubin joins from The Mill, where he worked on notable projects such as the award-winning Open Spaces for Burberry. Prior to that he spent time at MPC Advertising, Nexus and The Line Animation.

Lubin has an impressive list of credits, including campaigns for Apple, Moncler, EE, Marks & Spencer, BT and Balenciaga. He has collaborated with a stellar list of directors including Dom&Nic, The Sacred Egg, James Grey and Amber Grace-Jones.