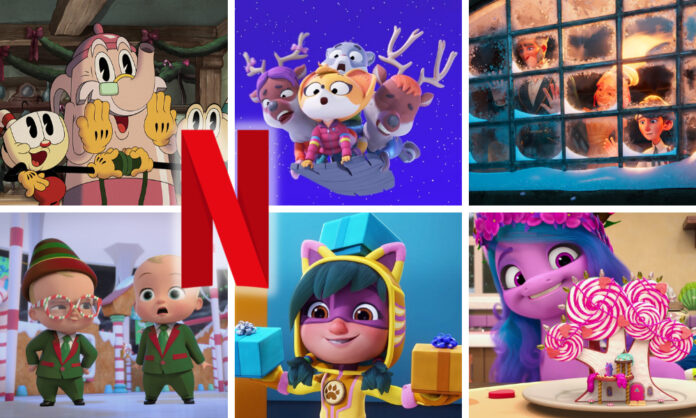 Netflix is programming a super cozy streaming season for the holidays, revealing even more fun Kids & Family animated specials will be unwrapped in the coming weeks.

In addition to the musical animated feature Scrooge and the just-announced Boss Baby merger with Santa’s workshop, subscribers can queue up new holiday specials from My Little Pony, Creature Cases and The Action Pack, as well as a third serving of The Cuphead Show! and a collection of favorites like Sergio Pablos’ acclaimed animated feature Klaus.

My Father’s Dragon From five-time Academy Award-nominated animation studio Cartoon Saloon (The Secret of Kells, Song of the Sea, Wolfwalkers) and Academy Award-nominated director Nora Twomey (The Breadwinner) comes an exquisite film inspired by the Newbery-honored children’s book from author Ruth Stiles Gannett. Struggling to cope after a move to the city with his mother, Elmer runs away in search of Wild Island and a young dragon who waits to be rescued. Elmer’s adventures introduce him to ferocious beasts, a mysterious island and the friendship of a lifetime.

The Cuphead Show! Part 3 From hijinks and heebie-jeebies to holiday cheer: This season’s got it all as the boys go big to trick the Devil — and stir up trouble all over town! Special holiday episodes in Part 3 include “A Holiday Tree-dition” and “A Very Devil Christmas.”

My Little Pony: Winter Wishday With different holiday traditions across three pony lands, the Mane 5 race against time to celebrate everyone’s special customs and make it home in time for the Wishing Star.

The Action Pack Saves Christmas When the Christmas cheer is taken from the citizens of Hope Springs, the Action Pack team up with a super-powered Santa Claus to save the day.

Creature Cases Holiday Special Everyone’s decking the halls to get in the holiday spirit. But Sam and Kit are blasted back in time to the Ice Age and meet some wooly new pals!

Scrooge: A Christmas Carol Produced by Timeless Films in association with Axis Studios and directed by Stephen Donnelly, Charles Dickens’ ageless legend is reborn in this supernatural, time-traveling, musical adaptation of the definitive Christmas story. With his very soul on the line, Scrooge has but one Christmas Eve left to face his past and build a better future. Featuring re-imagined songs from the legendary and two-time Academy Award winner Leslie Bricusse OBE, Scrooge: A Christmas Carol is one for a new generation to sing. In select theaters November 18.

Boss Baby: Christmas Bonus It’s Boss Baby’s first Christmas and though Tim wants to introduce him to all the holiday trappings as well as the (somewhat strange) Templeton traditions, Boss Baby wants nothing to do with any of it. In a last ditch effort to get Boss in the spirit, Tim takes him to the mall to meet Santa but unbeknownst to Tim, Boss and Santa have a previously undisclosed business relationship.

Sonic Prime Season 1 The action-packed adventures of Sonic the Hedgehog go into overdrive when a run-in with Dr. Eggman results in a literal universe-shattering event. Desperate to piece his prime reality back together and save his old friends, Sonic races through the Shatterverse, discovering strange worlds and enlisting new friends in an epic adventure of a lifetime!