Irish CGI studio Little Moon Animation has become one of the first studios in Europe to achieve the broadcast of a series produced through Unreal Engine, joining a growing list of prodcos around the world. Fia’s Fairies made its broadcast debut on RTEjr on October 31.

Created by Little Moon Animation, the original series (26 x 5′) aims to introduce preschool children to the Irish language. Every day, Fia and her best friend Ameer take a journey to Fairy Island where they learn the enchanting Irish language through exciting adventures with a pair of fairies, Bláithín and Cuán, and all their magical friends.

“We’ve been creating Fia’s Fairies together for over three years at Little Moon Animation. Every day has been a labor of love to bring the joy of animation, storytelling and language together in a way that will capture the hearts and imaginations of young children,” said Eoghan Garvey, Director of the series.

“As a small indie studio, the ability to harness real-time technology has not only benefited our remote workflows, but it has also brought back the joy of creating collaborative projects in real time. We’ve had a lot of fun building our own pipeline around Unreal Engine in a way that maximizes creative control.” 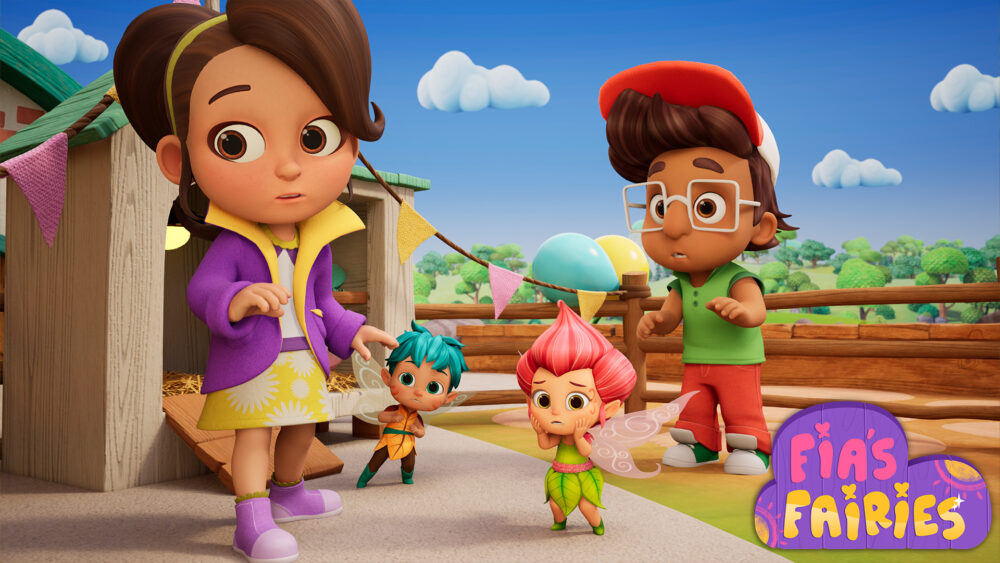 Vanessa Robinson, Creative Producer of the series, noted, “As a new and emerging studio with fixed budgets, using Unreal Engine on the show has been a game changer for Little Moon. Our technical strengths lie in our agility and ability to develop new, efficient pipelines without affecting the final creative quality.

“Traditionally, we would have been able to render a full five minute episode in two weeks through the use of a render farm. On Fia’s Fairies, we’ve been able to render an entire five minute episode of full HD broadcast quality in under one hour. This is transformative not just for our budgets but also for our schedules and resources. We’re excited to continue refining our bespoke pipeline as we push into production on our second real-time series, The Scavengers, commencing production in early 2023.”

Little Moon Animation was attracted to the use of game engine technology for its ability to support game development as well. Recipients of an Innovation Grant from Fís Éireann / Screen Ireland and Animation Ireland in 2021,  the studio is currently developing a language learning game that will allow young children to interact with the world and characters from Fia’s Fairies to continue to learn the Irish language.

Fia’s Fairies is distributed by Monster Entertainment. It is produced with the support of Fís Éireann / Screen Ireland, RTEjr, the Broadcasting Authority of Ireland and the incentives for the Irish Film Industry provided by the Government of Ireland.