Jeff Malmberg Dives Down the Mouse Hole for ‘Mickey: The Story of a Mouse’

***This article originally appeared in the December ’22 issue of Animation Magazine (No. 325)***

Representing both the acme of corporate consumerism and a white-gloved hero of happiness and goodwill to millions, Mickey Mouse has stood the rigors of time through countless reinventions, yet still remains an enduring emblem of pure, undiminished joy.

To delve into the magic of Walt Disney’s most famous creation, a new documentary from Jeff Malmberg created for the 100th anniversary of The Walt Disney Company will scurry onto Disney+ on November 18, exploring our intense love and need for Mickey.

It All Started with a Mouse

“We thought that a Mickey documentary would be a great opportunity to get deeper into this character and this symbol that we see every day and has been ingrained in our culture for such a long period of time,” Malmberg tells Animation Magazine. “It seemed like a natural situation where we were going to be able to tell the whole story of Mickey.”

Mickey’s cheery personality and indefatigable spirit remain bonded to anyone who encounters this one-and-only mouse. “I took my daughter to Disneyland just before I started this project,” recalls the director. “The look on her face when she saw Mickey! She was so happy seeing him and I thought there was something really odd going on here. So, it was a fun exercise in trying to figure out what that was.”

Viewed through the lens of Disney Legends like Eric Goldberg, Randy Haycock, Floyd Norman and Mark Henn and head archivist Becky Cline, it’s a nostalgic trip back to the roots of Mickey and his mercurial evolution. Another highlight of this salute will be the creation and unveiling of a new hand-drawn Mickey cartoon, titled Mickey in a Minute.

“The movie’s job is to decode and understand. It’s something to do with the fact that he’s as close to joy as we’re ever going to get in a symbol. So, there’s an emotion there for a lot of people and it’s cross-language. Your Mickey is different than my Mickey, and he’s been used in all these different ways. For me it’s the idea of a bit of joy we all share and that’s special.”

But to tell the entire tale of Mickey Mouse, warts and all, is to shine a ray of truth on some of the lesser-known periods of his existence — even though they may be uncomfortable.

“Disney has been famously sensitive about certain things in the past and so we felt that it was important to be honest,” he notes. “We stated that from the beginning and they never wavered on that. Milton Glaser, the great graphic designer, did a Mickey Mouse in Vietnam protest short, and I thought that was important to include. There’s even World War II imagery where somebody did a comic book inside a camp.

“Some of the stuff that was important to bring to light was Mickey’s past with the blackface shorts and the period where Mickey gets cross-pollinated with artwork outside of the Kingdom. I remember as a kid hearing that a school had to take down their Mickey things because Disney sued them. And that always stuck in my brain. It’s Mickey! He’s there to make people happy.”

Traveling down the mouse-hole while composing this love-letter, Malmberg’s own perceptions of Mickey changed as he immersed himself in the humble origins of Walt’s iconic character. “I grew up in the ‘70s and ‘80s, so I was completely unaware as a child that Mickey was anything other than a park greeter that I liked a lot and that my parents really liked … and was a nightlight. He was this symbol we all loved and put on t-shirts. 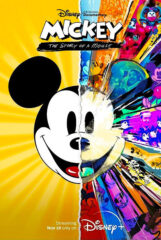 “To go into the kind of animation history of Mickey Mouse was really a journey for me. He was as big as Charlie Chaplin. The history of filmed animation kind of runs through Mickey and the fact that he’s still here is remarkable. I also lucked into the fact that Eric, Mark and Randy were going to be doing some new Mickey hand-drawn animation, so to see that process come to life was one of the things I enjoyed the most.”

Regarding some of the stranger iterations of Mickey Mouse that have popped up since his 1928 birth, Malmberg points to a short-lived TV incarnation. “There’s a ‘50s-era space age Mickey that appeared in a Nash automobile commercial that Eric Goldberg walks us through,” Malmberg recalls. “It’s just the strangest Mickey you’ve ever seen. And apparently when Walt saw it, he put a stop to it. And it’s part of the Mickey canon, this angular George Jetson version of Mickey. It was really bizarre.”

Mickey: The Story of a Mouse debuts on Disney+ on November 18.