In a recent live-streamed conversation promoting his latest book, author George R.R. Martin, creator of the A Song of Ice and Fire saga that inspired HBO’s award-winning Game of Thrones and the new prequel series House of the Dragon, announced that the animated feature based on his short story The Ice Dragon will be written by David Anthony Durham.

The video interview was presented by Random House Events, The Strand Book Store and Waterstones in support of The Rise of the Dragon: An Illustrated History of the Targaryen Dynasty Vol. I.

Martin describes Durham, who moderated the conversation, as his “partner in crime” and “one of the rising stars in science fiction and fantasy.” In addition to his epic Acacia fantasy trilogy, he is known for his Westerns and historical fiction works inspired by figures such as Spartacus and Hannibal.

“Some of you may know that I have other books, I occasionally wrote other books that were not part of Westeros or that,” Martin quips in the video, “and one of them that I wrote way back in 1978 was a short story about a dragon, an ice dragon — it’s called The Ice Dragon.

“… It’s primarily a kids’ story, but we are going to make that, Warner Bros. Animation has purchased the rights to it, and we’re going to expand it to a fully animated film … A theatrical film, we hope, to be released in a motion picture palace near you! And — David Anthony Durham will be writing the screenplay. And he better do a good job!”

Durham modestly replies: “So pleased to get that assignment — and so daunted by actually having that assignment.” This will seemingly be the author’s first screenwriting gig, following in the footsteps of Martin himself. The ASOIAF scribe wrote for TV’s The Twilight Zone and Beauty and the Beast (1987-1990) in addition to serving as writer and producer on his own projects, including Game of Thrones, House of the Dragon and Nightflyers.

Martin once again reiterated that despite the whole “dragon” bit, The Ice Dragon is not part of the Westeros universe with GoT and HotD. 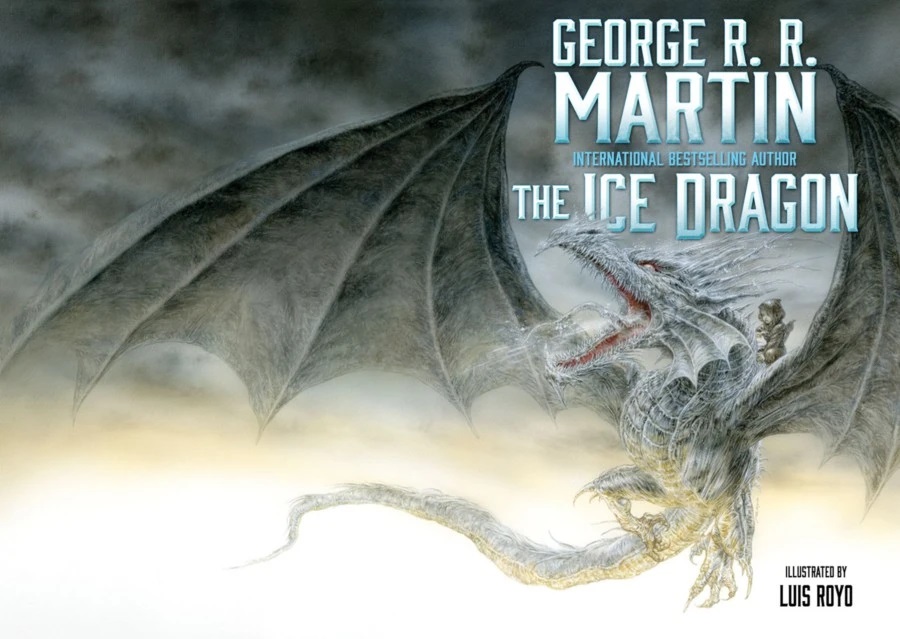 Warner Animation Group announced it had acquired rights to adapt The Ice Dragon back in 2018. Martin is serving as producer on the feature, and his manager, Vince Geradis, is an executive producer.

Published in the 1980 Ace Books anthology Dragons of Light and originally illustrated by Alicia Austin (Luis Royo illustrated the most recent 2014 edition from Harper Voyager), The Ice Dragon centers on a young girl named Adara, a “winter child” born during the worst freeze in common memory with a special gift for tolerating ice and snow — and to bond with the elusive and feared ice dragon. When a fiery threat descends on their peaceful farm from the war-torn North, only Adara and her protector can save the world she knows from destruction.

You can watch A Conversation with George R.R. Martin below; the small section on The Ice Dragon begins after the 53 minute mark, followed at the end by an update on The Winds of Winter (it’s about three quarters done) and A Dream of Spring (we’ll get it when we get it).