***This article originally appeared in the January ’23 issue of Animation Magazine (No. 326)***

“When I choose what to work on next, I decide based on what I’m best suited for, what kind of entertainment interests me the most,” says writer-director Hideaki Anno. “Evangelion was a project that repeatedly came back. I worked on the new theatrical movies, but I don’t think those kinds of opportunities will appear in the future for me.”

Anime fans have waited for 25 years for Anno’s Evangelion: 3.0+1.0 Thrice Upon a Time. The fourth and final installment in his reworking of the watershed television series Neon Genesis Evangelion (1995), Thrice Upon a Time finally brings the epic adventure to a definitive conclusion.

The second highest-grossing film in Japan in 2021, with revenues of ¥10.28 billion (USD $92.7 million) — despite audience limits imposed by the pandemic — Thrice Upon a Time will be released theatrically in the U.S. by GKIDS this month. “International plans for the film were disrupted by COVID, but we are thrilled to finally be able to present the film in theaters,” says GKIDS president David Jesteadt. “The film’s focus on themes of renewal and rebuilding is both visually stunning and emotionally uplifting, coming out of the pandemic.”

Anno mixed elements of Jewish mysticism and Christian symbolism with teenage angst and mecha battles in Evangelion (pronounced E- van-GEL-ion, with a hard ‘G’) to create one of the most influential and widely debated series in anime history. In the not-too-distant future, mankind’s survival is threatened by the assault of weird, awesomely powerful beings known as “Angels.” The only weapons effective against them are the Evangelions, equally monstrous cyborgs guided by psychically gifted teenagers. The hero of the series is morbidly alienated 14-year-old Shinji Ikari, whose brutal father forces him to become a pilot.

Anno discussed his landmark work in a recent interview conducted via Zoom.

“Animation is fiction; that means that everything that makes it up is lies or a fantasy: nothing of it is real,” he says. “I wanted to bring more of a sense of reality into this made-up world. I wanted to make the characters more human. People feel that Shinji is unusual in that sense. I think the sense of reality I brought reflects my experience and knowledge.”

“But Shinji is not the only one who is a reflection of myself,” he continues. “All the characters have some part of me in them. As animation is made by a group of people, all the personalities in the characters are not just reflective of myself but my group of creators. Each of these characters depicts our combined personalities.”

The Evangelion broadcast series was an enormous success: When the final episode aired in March 1996, more than 10% of all TV sets in Japan were tuned to it. The popularity of the series has never flagged.

But the ending of Evangelion satisfied neither Anno nor the viewers. Anno recut the final episodes, re-released them, then reworked them into the feature Death and Rebirth (1997). A second feature, End of Evangelion (1997), presented a different conclusion. Fans debated the alternate endings at anime cons and in online forums: Did the endings illustrate Shinji’s collapse into schizophrenia? Did they depict some apocalyptic disaster? Both? Neither? Something else entirely? No one could say for certain, but everyone had an opinion.

In 2002, Anno announced plans for a four-feature “rebuild” of Evangelion, taking advantage of larger budgets and more advanced CG technology to create the adventure as he originally envisioned it. Evangelion: 1.0 You Are (Not) Alone (2007) was a retelling of the first six television episodes with often dazzling new visuals. Evangelion: 2.0 You Can (Not) Advance (2009) and Evangelion: 3.0 You Can (Not) Redo (2012) departed from the original narrative and moved the characters in completely new directions. All three films were critical and box office hits. Thrice Upon a Time brings the saga to a surprising but satisfying conclusion.

“For the rebuild series, I intended the first Evangelion movie to be similar to the broadcast episodes,” Anno explains. “The second would gradually change, and the third and fourth to be totally different. From the outset, I didn’t intend to do the same thing as the TV series.”

“The way Anno continued to revisit and rework the central story, characters and ending of the Evangelion franchise, first in the TV series, then across multiple films, is incredibly rare and personal,” comments Jesteadt.

“Filmmaking heavily relies on the technology of the time, and with new technology, new visuals could be created,” Anno adds. “Twenty-five years ago, 3D CG was available, but it was not as advanced as it is currently, so it couldn’t be really used. I really wanted to use these new techniques and technologies for the rebuild.”

The four features showcase Anno’s skill at deploying these new technologies to reimagine his story. The destruction wreaked by the Angels in the broadcast series were similar to the effects in Gundam Wing and other contemporary sci-fi programs. The new features emphasize the terrible power of the Angels. In the television show, the Angel Ramiel blew up tanks and missiles with unremarkable explosions drawn on cels; in the new films, Ramiel effortlessly reduces humanity’s most advanced armaments to white-hot slag.

Shortly before the original Evangelion aired, Anno wrote that he had created it after four years of severe depression, commenting, “The story has not yet ended in my mind. I don’t know what will become of Shinji or [the other characters], or where they will go.” Nearly 30 years later, he concludes, “I don’t feel a need to see Shinji and the other characters any time soon. But that doesn’t mean I don’t want to see them ever again: There might come a time when I meet them again.” 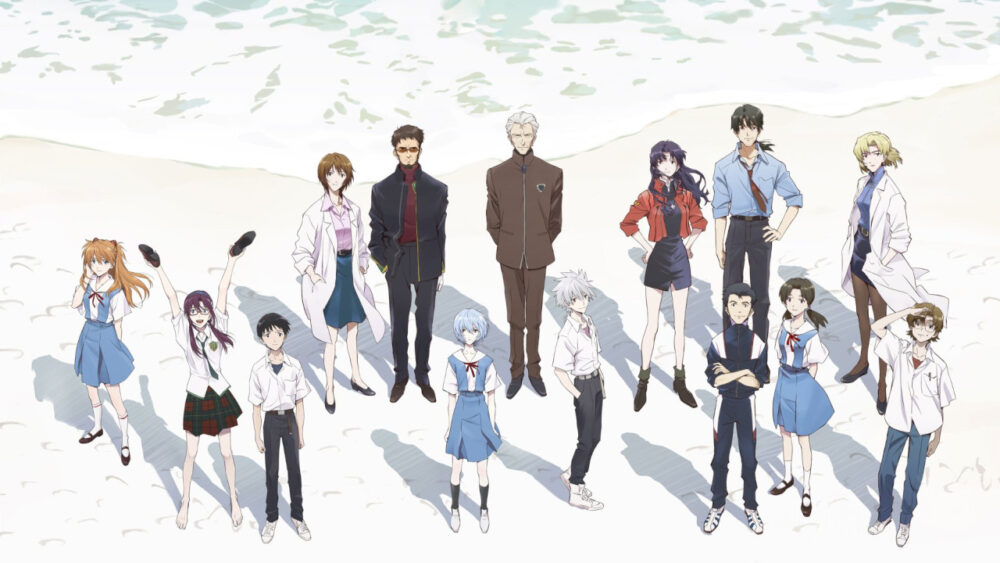 Meanwhile, Anno has shifted to live-action production. In 2016, he co-directed the blockbuster Shin Godzilla. Toei is scheduled to release his Shin Kamen Rider, part of the 50th anniversary celebration of the popular superhero franchise, in March of 2023.