By Ramin Zahed
November 18, 2022
0
2090
Facebook
Twitter
Pinterest
WhatsApp
We have a special treat for you today to help celebrate Mickey’s 94th birthday (the popular mascot made his debut in Steamboat Willie on Nov. 18, 1928). We were fortunate enough to catch up with with Emmy-winning artist Alan Bodner, who is the art director for Disney Channel/Disney Junior’s popular series Mickey Mouse Funhouse. The show began its second season on Nov. 4. Here is what the talented Mr. Bodner, who has worked on movies like The Iron Giant and TV projects such as Tangled: The Series, Phineas and Ferb, The Looney Tunes Show and Kim Possible, shared with us:

Animation Magazine: Congrats on the phenomenal success of your show, and happy Mickey’s 94th birthday in advance. Can you tell us how you got started in animation?

Alan Bodner: Having had the great fortune of being born into a family whose business was centered around play, my creative side exploded. My family was in the toy business. My father, brother and I would sit and watch Saturday morning cartoons together — Dad was checking out the toy commercials and I was captivated by the shows. All aspects caught my attention. The color, movement, locations, music and characters all engaged my imagination completely.

For years, I would copy backgrounds and characters from my Disney books and other story books. After college I returned to the idea of working in animation. The positive spirit I saw in the studios I visited and the artists working together looked so inviting. I just had to find a way in. To this day, I am in awe of the great talent in these studios and that collaborative spirit is wondrous.

Please tell us about some of your favorite experiences in your colorful career:

Here are my favorites over the years:

Working at Warner Bros. Classic Animation was a stellar experience. To be part of the original studio at the sunset of that era was a privilege. I had always loved the Warner shorts, so to be around it was fabulous. On a given day, the historical and original creators such as Chuck Jones, Friz Freleng, Mel Blanc, June Foray, Virgil Ross or Maurice Noble could be right down the hall. There I painted on shorts, commercials, specials and art for the Warner Bros. Studio Stores. So many of my peers went on to impressive careers in animation.

The Iron Giant was my first opportunity at art directing. Mark Whiting was the production designer and I learned how to work in combination with his vision and discover mine. This was the first time I did color scripts (paintings that followed the arc of the film story, mood of the scenes, action, weather and costume color). It was a phenomenal experience in leading a group of background painters and working with layout artists. I thank Brad Bird for the opportunity to develop my art direction skills. 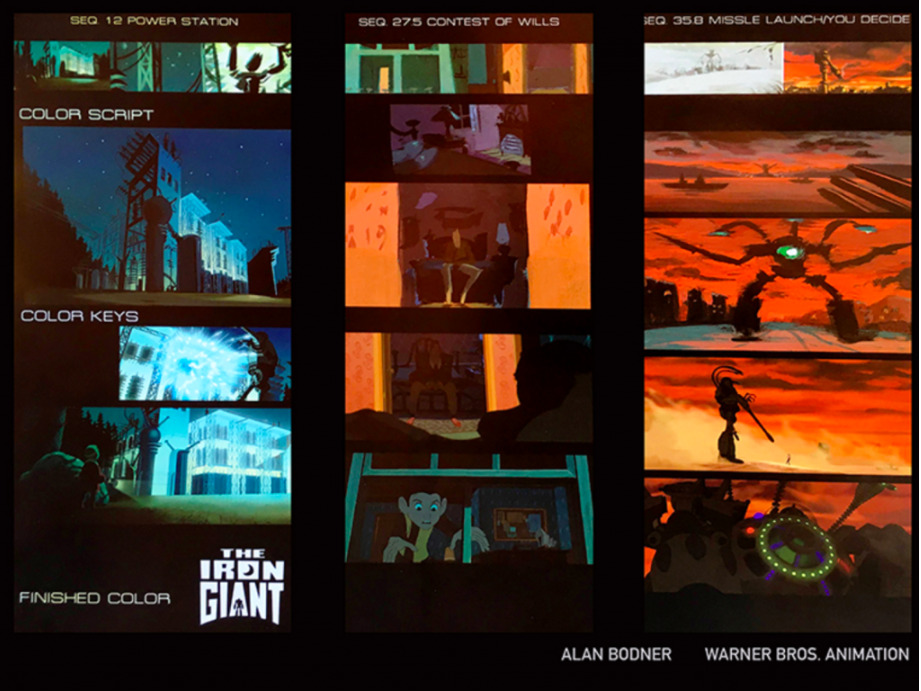 Disney has continued to provide me with many stellar experiences. I had no idea the huge success Kim Possible would be when director Chris Bailey hired me on. It’s a pleasure working in a graphic style with limited details, the signature look of the series. To influence that style, it was wonderful to find reference from shows I loved as a kid: Thunderbirds, Fireball XL5, those fabulous Disneyland Park posters, mid-century design and a bit of UPA.

My first experience with Mickey Mouse was with director Matt O’Callaghan on Mickey’s Twice Upon a Christmas. It was early on in CG and another great learning experience. Trying to keep that classic world those characters live in with all the lighting and rendering of CG is always a bit tricky. It was a joyous experience. Working again with Matt on shorts Daffy’s Rhapsody and I Tawt I Taw a Puddy Tat for Warner Bros. Animation was indeed another highlight.

I was a huge fan of the Tangled feature, so to work on the series was very fulfilling. Giving it a storybook look that complimented the original was challenging. I liked the idea that we were making a feature that ran for three seasons. I painted more color keys for that show than I had for my entire career. It was great, and I thank Chris Sonnenburg for his vision.

Which shows and movies really made an impact on your growing up?

I loved the early James Bond films, seeing that as a kid was terrific. The style of the sets was beautiful with that mid-century influence. The music by John Barry was the perfect combination, both visually and audibly. I wore out the piano book playing those songs. From that point on I felt very comfortable wearing a suit and tie. All the Universal Monster films, Abbott and Costello and Fred Astaire films with that amazing Art Deco style all to this day come out in my own art. Television from that time period really influenced me — Wild Wild West, Voyage to the Bottom of the Sea, Batman, Lost in Space and absolutely the series produced by Sid and Marty Krofft.

What do you love best about working on the Mickey Mouse Funhouse?

I have always loved Mickey Mouse and all the classic Disney characters. When asked to come on this series I was hopeful to create the world with a nod to early Disney. Both Phil Weinstein (executive producer) and I agreed on this. We referenced rides in Disneyland such as Toon Town and Fantasyland. We also looked at the original The Mickey Mouse Club from the 1950s. Those live-action sets had such style. Phil modeled Mickey Mouse on veteran Disney animator Freddie Moore’s Mickey. It was important to be inspired by it. It has been pure joy to be a part of it and work with such talented artists each day.

What would you say is your biggest challenge on this show?

Actually, because it is a CG show, over rendering and over lighting this world was a big concern. We also wanted it to feel like the traditional backgrounds we paint for preproduction. I believe we have kept that controlled and communicated that to all working on it.

I think it is a great tribute to Walt Disney, who understood the need for characters that have real feelings, similar life experiences to his audience, and to bring people together. From my own experience, they were my friends from an early age. The Mickey Mouse Club played in my house every Sunday night and I felt like a Mouseketeer from the get-go.

What do you love about working as an art director in general?

Developing a look for the show is a key part. How the style works with the character design, the story, the process — be it traditional or CG — all play into that decision. Working with so many talented people always puts a smile on my face. That moment when they take ownership of the style is great! When I painted backgrounds my focus was just on one aspect, so to see the project on many levels makes it even more exciting.

What kind of advice would you offer young people who want to have a long and rewarding career in animation?

The talent coming into animation today is extraordinary. Having initial computer skills and drawing is a must. However you enter this business, don’t rush to get to the next position. This is not a race to the top. Enjoy each job you have and the people around you. There will be plenty of opportunities to grow. Just be the best you can be at each stage. Make sure to learn from others and share with others; that is the key to success.

You can learn more about Alan’s amazing art and career on alanbodner.com.