Just in time for the big Thanksgiving weekend, Disney is releasing its 61st animated feature in theaters. Audiences have been curious about director Don Hall’s epic adventure Strange World, which is inspired by the far-flung tales penned by the likes of Edgar Rice Burroughs, Arthur Conan Doyle and Jules Verne. The movie, which features the voices of Dennis Quaid, Jake Gyllenhaal, Gabrielle Union and Jaboukie Young-White, follows a diverse family group as they try to deal with their interpersonal baggage and the bizarre things around them.

Today, fans got to read some of early reviews of the movie, which ranged from raves about the adventure quotient and the poignant family dynamics to lukewarm critiques of its familiar jokes and messages. Currently, the film has a 74% grade on the review aggregation website Rotten Tomatoes (rottentomatoes.com).

Here is a quick sampler that represents the overall views of the eagerly anticipated holiday release:

“Strange World’s story is pretty straightforward and follows familiar beats, but the mysteries of pando and Avalonia’s subterranean world are a creative standout — it’s a place you can’t help but want to know more about, danger be damned…One of the movie’s most ambitious swings is in the way its familial themes are paralleled in the movie’s environmental message.”

“The fantastical world is meticulously and wondrously rendered by the animators, who drew much of their inspiration from pulp magazines of the ‘30s and ‘40s…There’s a whimsical touch in the details, most of which are revealed because of Ethan’s desire to peer into every nook and cranny. [The movie] reaffirms the truth that often it’s children who stand to teach adults the most…. From here on, Strange World oscillates between a confident story about fathers and sons trying to rebuild their bonds and a more unnecessarily self-conscious one about the crew’s efforts to preserve their way of living.” 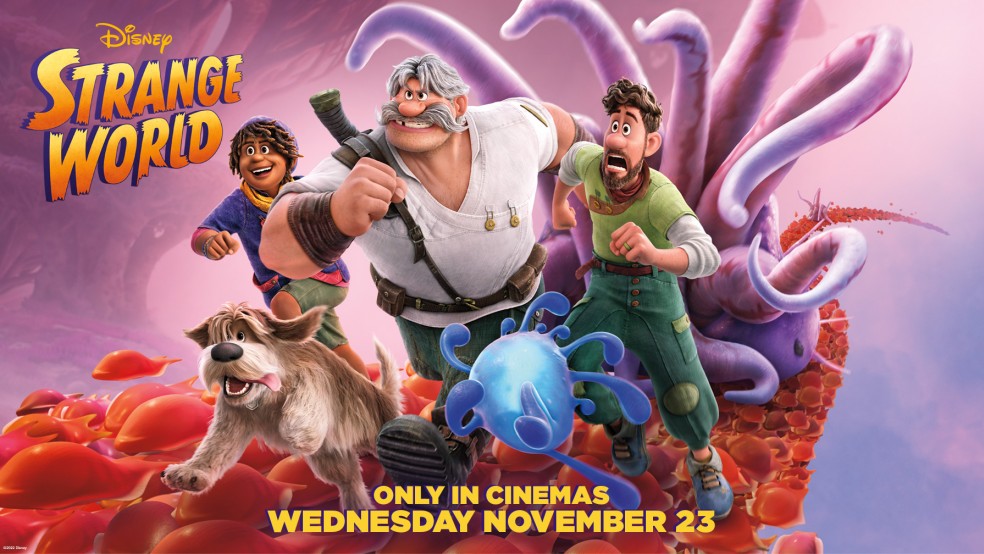 “The world may be super-weird, but those who populate it are some of the most realistic and well-rounded that Walt Disney Animation Studios has ever presented. Ergo, it’s the characters as much as the environment that make this vibrant, Journey to the Center of the Earth-style adventure movie colorful and diverse in all the best ways. Great as the people and places they explore may be, however, the relatively unimaginative story consigns this gorgeous toon to second-tier status, instead of cracking the pantheon of Disney classics.”

“Strange World has the makings of a fun, pulpy adventure story, and it is, but much of the plot is bogged down in strange, unfunny dialogue and a needlessly complicated storyline. Each setback or separation between the main characters is easily resolved and seems created only to pad the movie’s runtime. Every moment of emotional connection or open-mouthed awe is undercut by a joke, as if the filmmakers  are allergic to being too earnest.

“The clunky script feels like it’s been re-drafted and re-drafted to the point of incomprehension – blowing any chance of conveying a message. However well-meaning, it makes for a surprisingly dull watch. That said, my five-and-three-quarter-year-old (and clearly a few other younger people in the cinema) were a bit scared by some of the dicier moments of action-adventure peril.

Read our feature about the making of the new movie here:

Watch the latest trailer below: