Another web slinger has joined the cast of  Spider-Man: Across the Spider-Verse, Sony Pictures Animation’s highly-anticipated sequel to Oscar-, Golden Globe-, BAFTA- and Annie-winning feature Spider-Man: Into the Spider-Verse. Daniel Kaluuya, also an Oscar winner for his supporting role in Judas and the Black Messiah and nominee for Get Out, has signed on to voice 21st century Marvel canon addition Spider-Punk.

Introduced in 2015 by writer Dan Slott and artist Olivier Coipel, Spider-Punk is the alias of Hobie Brown, a homeless teenager who becomes a hero of the oppressed in his universe’s New York City. Kaluuya, repped by Entertainment 360, B-Side and Johnson Shapiro, returns to animation after voicing Bluebell in the 2018 Watership Down miniseries. His credits also include Nope, Queen & Slim, Black Panther and Sicario.

Details of Across the Spider-Verse are slim, but the film will follow Miles Morales (Shameik Moore) and Gwen Stacy (Hailee Steinfeld) on an even more ambitious dimension-hopping adventure, meeting new interdimensional Spider-People (including Oscar Isaac as Spider-Man 2099 and Issa Rae as Jessica Drew/Spider-Woman) and facing a powerful new villain, Ink Spot (Jason Schwartzman). The sequel is directed by Joaquim Dos Santos, Kemp Powers and Justin K. Thompson. Part 1 will premiere June 2, 2023, followed by Part 2 on March 29, 2024.

Meanwhile, another very different comics-inspired project has added two talents to its voice roster: Brett Goldstein (Ted Lasso) and Bowen Yang (Saturday Night Live) have joined the cast of Alcon Entertainment’s Garfield, which will be released by Sony Pictures (worldwide exc. China) on May 24, 2024, and is animated by production partner DNEG Animation (Ron’s Gone Wrong). It was not revealed what Goldstein and Yang’s roles will be in the latest big screen outing for Jim Davis’ popular feline misanthrope.

Goldstein has won several awards for his role in Ted Lasso, including two Primetime Emmys. His previous animation experience amounts to voicing Tony Stark for an episode of Robot Chicken, but his credits list also includes Thor: Love and Thunder, Doctor Who and, coincidentally, a gig as James Garfield on Drunk History UK. He is repped by WME, Mosaic, B-Side Management, LARK and Hansen Jacobson, 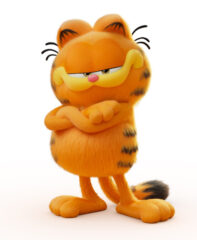 SNL breakout Yang has received three Emmy nominations and brings a longer list of animation credits to his latest project, including Gremlins: Secrets of the Mogwai, Duncanville, Ten Year Old Tom and Archer, as well as the upcoming films The Tiger’s Apprentice, The Monkey King and Night at the Museum: Kahmunrah Rises Again special coming to Disney+ December 9. He is repped by UTA and 3 Arts Entertainment.

The newcomers join Chris Pratt, starring as the cat himself, Samuel L. Jackson as Garfield’s never-before-seen dad, Nicholas Hoult, Hannah Waddingham, Cecily Strong and Ving Rhames. The movie is being directed by Mark Dindal from a script by David Reynolds, Paul Kaplan and Mark Torgrove. Comics creator Davis serves as an exec producer.