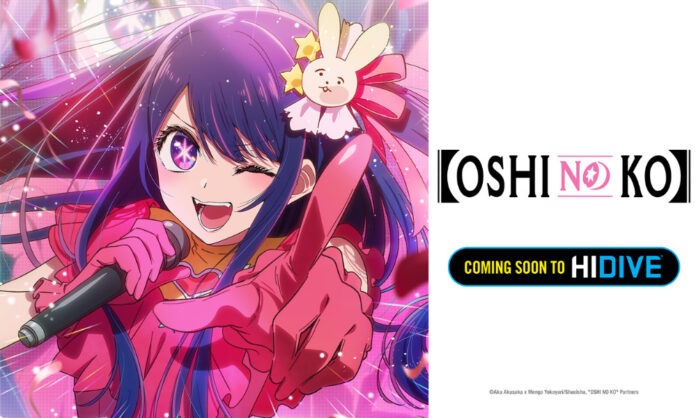 HIDIVE (hidive.com) took the stage at Anime NYC to announce a number of exclusives, acquisitions and new series joining its ever-growing anime slate. Highlights include Oshi no Ko, the highly anticipated new anime drama series adapted from the award-winning seinen manga written by Aka Akasaka (Kaguya-sama: Love Is War) and illustrated by Mengo Yokoyari (Scrum’s Wish); plus eight acquisitions led by Winter 2023 simulcasts for Spy Classroom, Kubo Won’t Let Me Be Invisible and more.

Oshi no Ko (Spring 2023) — When a pregnant young starlet appears in Gorou Amemiya’s countryside medical clinic, the doctor takes it upon himself to safely (and secretly) deliver Ai Hoshino’s child so she can make a scandal-free return to the stage. But no good deed goes unpunished, and on the eve of her delivery, he finds himself slain at the hands of Ai’s deluded stalker — and subsequently reborn as Ai’s child, Aquamarine Hoshino! The glitz and glamor of showbiz hide the dark underbelly of the entertainment industry, threatening to dull the shine of his favorite star. Can he help his new mother rise to the top of the charts? And what will he do when unthinkable disaster strikes?

Oshi no Ko will be directed by Daisuke Hiramaki (Selection Project) and Chao Nekotomi (Love Is Like a Cocktail), written by Jin Tanaka (The Misfit of Demon King Academy), with character design by Kanna Hirayama (Rent-A-Girlfriend) and animation by production studio Doga Kobo (Monthly Girls’ Nozaki-kun, Sleepy Princess in the Demon Castle). The voice cast will star Rie Takahashi (Teasing Master Takagi-san 3) as Ai Hoshino. The series will premiere in Spring 2023 with a special 90-minute first episode and be available exclusively on HIDIVE.

Set in the cutthroat world of showbiz, the Oshi no Ko manga series first premiered in Shueisha’s Weekly Young Jump in April 2020 and since then, has grown to encompass nine volumes with more than 3.8 million copies in print. It has picked up accolades including wins at the Next Manga Awards and 46th Annual Kodansha Manga Awards, as well as nominations for the Shogakukan Manga Award and 26th Annual Tezuka Osamu Cultural Prize. In March 2022, Oshi no Ko was named #5 on the 2022 AniRank, AnimeJapan’s annual poll of the Top 10 “Manga We Want to See Animated,” just three months before plans for the anime adaptation were announced. Ahead of the anime’s release, Yen Press will be publishing the first-ever English paperback edition of the manga series. Volume 1 will hit bookshelves on January 17, 2023 and is currently available for pre-order. 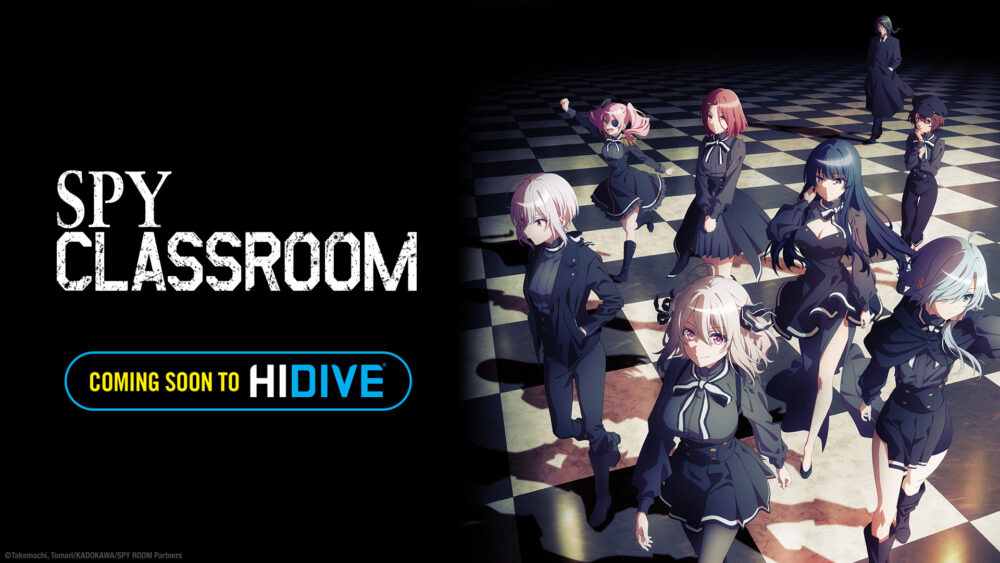 Spy Classroom (Winter 2023 Simulcast) — Conflict-ravaged nations now deploy covert operatives instead of missiles. Lily is recruited into spy-training … but her practical skills are absolutely abysmal. Desperate to pass, she leaps at the chance to join the mysterious “Tomoshibi” team. Too bad the team is filled with even more hopeless spies. Together they must conquer the Impassible Mission and best their genius instructor, but the true purpose behind their classroom is more harrowing than they can imagine…

Based on the spy thriller light novel series written by Takemachi and illustrated by Tomari. Spy Classroom is directed by Keiichiro Kawaguchi, written by Shinichi Inotsume and produced by studio feel. 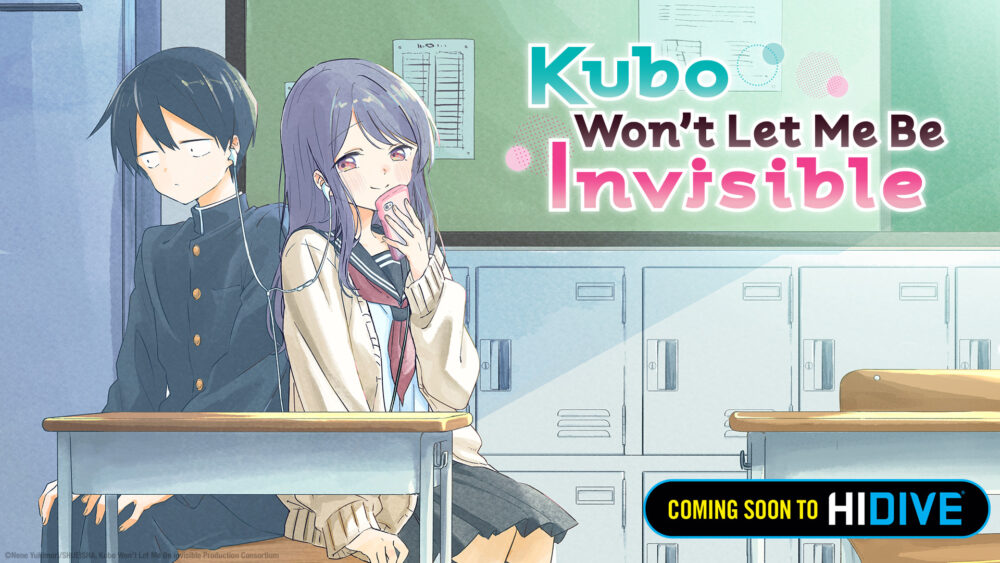 Kubo Won’t Let Me Be Invisible (Winter 2023 Simulcast) — Junta Shiraishi has just one goal: to experience youth to the fullest! But this is easier said than done. Junta is so socially invisible that people at school would swear he skipped class even when he’s sitting right behind them. Everything changes when Junta meets Nagisa Kubo. She’s the only person who pays Junta any attention, and her constant teasing is sure to turn Junta’s quiet life upside down because Kubo won’t let him be invisible!

Based on the seinen rom-com manga series by Nene Yukimori  serialized in Shueisha’s Weekly Young Jump since October 2019. Kubo Won’t Let Me Be Invisible is directed by Kazuomi Koga, written by Yūya Takahashi and produced by Pine Jam. 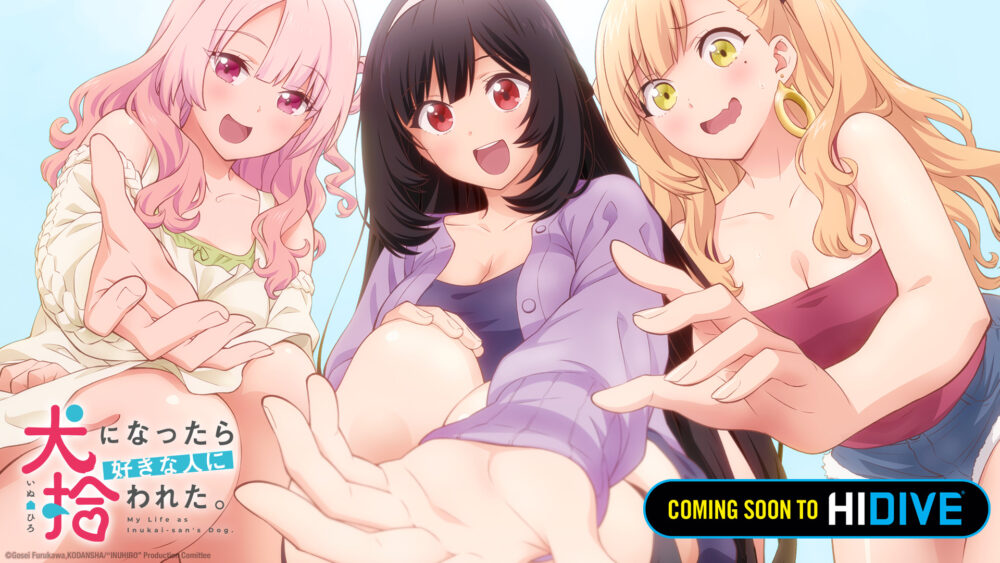 My Life as Inukai-san’s Dog (Winter 2023) — They say every dog has his day. That’s especially true for our protagonist, who was just turned into a dog and now lives every day under the care of his crush, Inukai-san! She happily dotes on her new companion, and while he wants to return to human form someday, there’s something wonderful about being cared for by the person he loves. Enjoy life through the eyes of a dog!

Based on the shonen ecchi rom-com manga series by Itsutsuse and originally serialized in Kodansha’s Magazine Pocket. My Life as Inukai-san’s Dog is directed by Takashi Andō and produced by Quad. 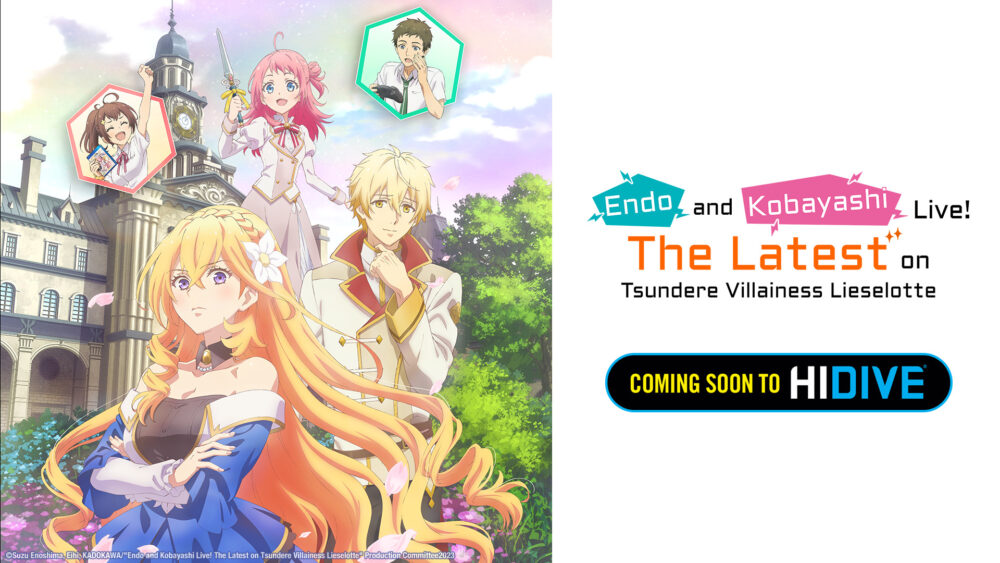 Endo and Kobayashi Live! The Latest on Tsundere Villainess Lieslotte (Winter 2023 Simulcast) — Endo and Kobayashi just decided to play A Magical Romance, an otome game featuring a devious villainess named Lieselotte. Kobayashi thinks Lieselotte is a traditionally dastardly villain, but Endo insists Lieselotte is just misunderstood. The pair bicker and argue about Lieselotte’s character and motivations. But little do they know that Lieselotte’s in-game fiancé can hear their every word, and their colorful chatter will lead him down a completely different path than his character is supposed to tread!

Based upon a fantasy light novel series written by Suzu Enoshima and illustrated by Eihi. Endo and Kobayashi Live! The Latest on Tsundere Villainess Lieselotte is directed by Fumihiro Yoshimura, written by Tomoko Konparu and produced by Tezuka Productions. 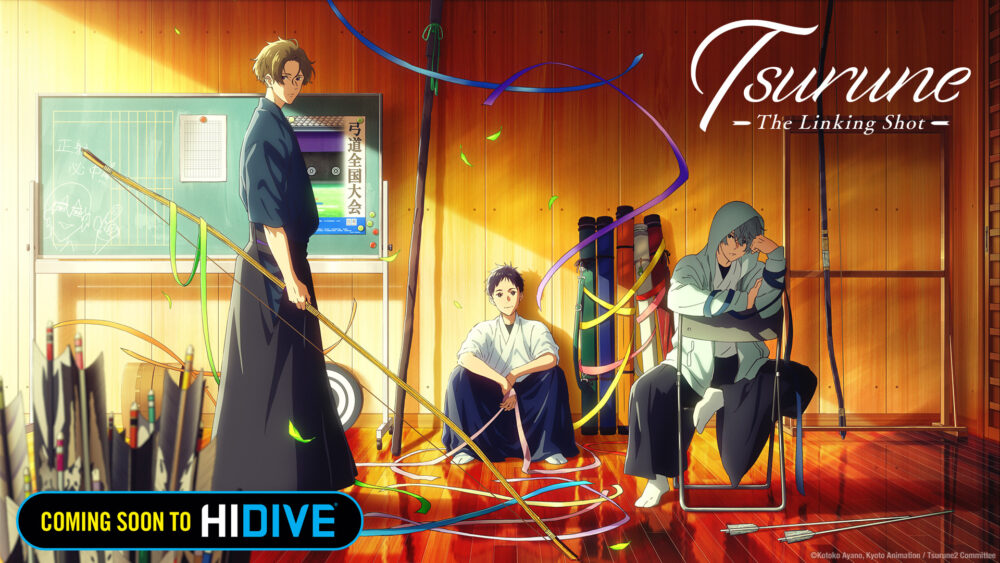 Tsurune – The Linking Shot – Season 2 (Winter 2023 Simulcast) — Protagonist Minato Narumiya has reignited his passion for kyudo, the Japanese martial art of archery. Along with his friends in the school kyudo club, he returns for an all-new second season and feature-length film of Kyoto Animation’s beloved Tsurune.

Based on the three volume sports light novel series Tsurune -Kazemai High School Archery Club- written by Kotoko Ayano and illustrated by Chinatsu Morimoto. The first novel won a Special Judge Award in the Kyoto Animation Award competition in 2016 and was published by Kyoto Animation later that same year in December. Tsurune – The Linking Shot – (Second Season) is directed by Takuya Yamamura and produced by Kyoto Animation. The 13-episode first season premiered on October 22, 2018. 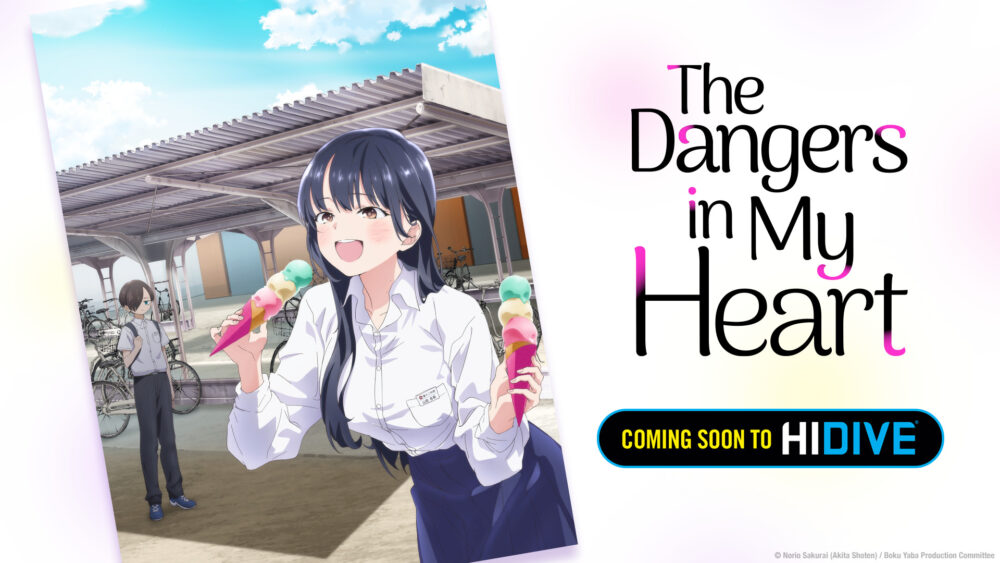 The Dangers in My Heart (2023) — Fascinated by murder and all things macabre, Kyotaro daydreams of acting out his twisted fantasies on his unsuspecting classmates — but an encounter with Anna Yamada, the gorgeous class idol, lights a spark in the darkness of his heart. It’s a classic tale of an antisocial boy falling for a popular girl, but neither are who they appear to be at first glance. Will Kyotaro and Anna defy their expectations of each other — and of themselves?

Based on the shonen rom-com slice of life manga series by Norio Sakurai and serialized in Akita Shoten’s Manga Cross. The production staff of The Dangers in My Heart has not been revealed. 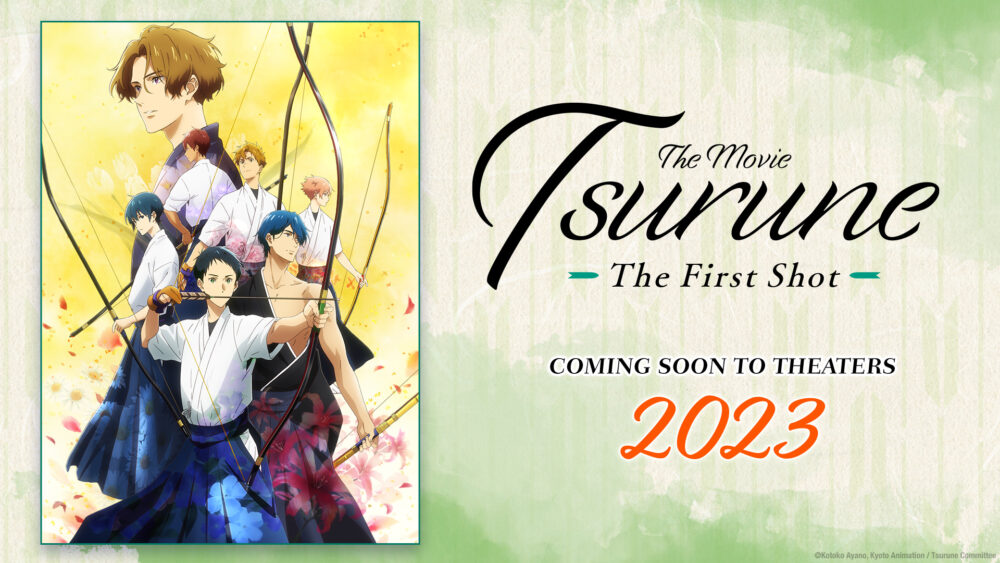 Tsurune The Movie – The First Shot – (In Theaters 2023) — Protagonist Minato Narumiya has reignited his passion for kyudo, the Japanese martial art of archery. Along with his friends in the school kyudo club, he returns for an all-new second season and feature-length film of Kyoto Animation’s beloved Tsurune.

Like the series, based on the three volume sports light novel series Tsurune -Kazemai High School Archery Club-. Tsurune The Movie – The First Shot – (a.k.a. Gekijouban Tsurune -Hajimari no Issha) was written and directed by Takuya Yamamura and produced by Kyoto Animation. The 120-minute movie premiered in Japan on August 19, 2022.