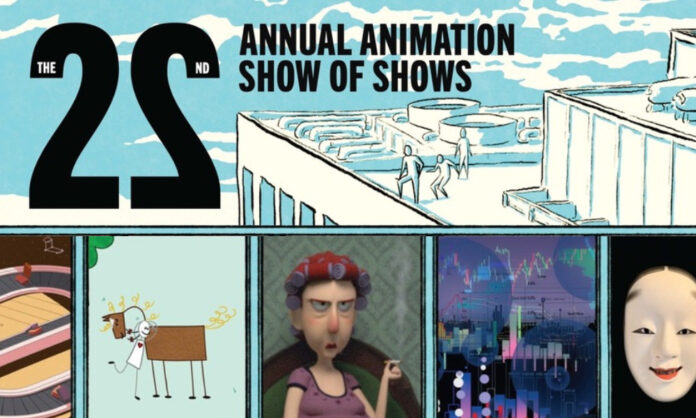 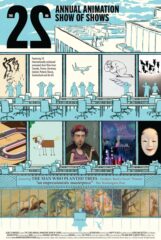 After a two-year COVID hiatus, the Animation Show of Shows returns to theaters and campuses across North America this fall. This 22nd edition comprises 10 films — nine recent creations from Asia, Europe and North America, along with one restored classic — which the organizers note deal with both the anxieties and hopes of a world faced with a seemingly endless series of existential crises, each inventive and unique in tone and technique.

“Animation is a natural medium for dealing with abstract ideas and deeply felt concerns, and the Animation Show of Shows has always strived to scour the world for the most affecting and engaging films,” says founder and curator Ron Diamond. “While the recent films were conceived and some finished, before the COVID lockdowns, all but the most abstract display a concern with the ways in which we are all interconnected … or sadly alienated from our sense of human connection.”

This general issue appears in many forms and styles: While Beyond Noh cleverly shows the prevalence of masks through all cultures and Rain humorously explores the dangers of groupthink, Ties takes the notion of connectedness from the metaphorical to the actual.

Beyond Noh — Patrick Smith/Kaori Ishida (U.S./Japan)
Set to a driving percussive score, Beyond Noh rhythmically shows us 3475 masks in under four minutes, creating a constantly mutating, almost dancing image — moving from Japanese Noh masks to a variety of tribal ritual masks and on to every possible Halloween mask, from Guy Fawkes to Marvel Comics to the Simpsons.

Empty Places — Geoffroy de Crecy (France)
A record player repeatedly plays Beethoven’s “Moonlight Sonata.” Elevator doors open and close. A luggage carousel goes round and round, a machine spits out tennis balls, a train mindlessly continues its route. But there is no one to pick up the bags, to hit the balls, to ride the train. It is as though everyone in the world has suddenly vanished without explanation, leaving our objects to futilely serve a non-existent populace. De Crecy describes his film as “an ode to the melancholy of machines.”

Beseder (Good and Better) — Gil Alkabetz (Germany)
Alkabetz presents us with a series of surreal vignettes, invoking famous works by Picasso, Dali, Magritte, Duchamp and Saul Steinberg. Many involve distortions of the human form, in the manner of Bill Plympton; the result is unsettling (even when funny), bemoaning the human tendency toward pessimism. “So hard to think it’s gonna be good and better. It’s too complicated. So easy to think it’s gonna be bad and worse.”

Zoizoglyphe — Jeanne Apergis (France)
In this hand-drawn debut film from next-gener Apergis (born in 2000), little bird-like figures pop up on screen. They organize themselves into phalanxes; one outlier joins them, setting off a chain reaction that drives them across the screen. Their movements generate the soundtrack. As they cascade, there is the illusion of watching an optical representation of the sound.

Rain (Deszcz) — Piotr Milczarek (Poland)
A man stands on the roof of an impossibly tall skyscraper, having a smoke. Someone playfully sneaks up behind him, so startling him that he falls off the roof. The company CEO, sitting in his office, is the first to see the body dropping past his window. He leaps up, grabs a cape and flies to the rescue. Other employees, seeing the rescue, gather on the roof and start jumping themselves. Groupthink? A new ice-bucket challenge? Digging the thrill? Dozens jump — the CEO, exhausted, gives up as more bodies fly by the windows.

Average Happiness — Maja Gehrig (Switzerland)
A statistics professor is delivering a very dry lecture using “average happiness” as an example. It’s so dry that the graphs he’s explaining seem to get bored. They mutate themselves into stark images, flowing and overlapping, exuberant and colorful, although the subject matter they represent — energy usage, mortality rates, war — is often downbeat. Working from found footage, director Maja Gehrig alternately connects and disconnects the images from the real-world aspects they are meant to convey.

Aurora — Jo Meuris (U.S.)
Jojo is a pig-tailed little girl who falls in love with a horse named Aurora. When Aurora moves away, Jojo’s heart is broken. But, after a while, another horse comes into her life, and, while he’s definitely not Aurora, the girl comes to love him, and her heart begins to heal.

Yes-People — Gísli Darri Halldórsson (Iceland)
In this Oscar-nominated short, Halldórsson presents a day in the life of the residents of an apartment building, as they wordlessly go about their business…. or almost wordlessly: the one word we hear repeatedly is “Ja” (yes). A music teacher sends her son off to school (where he daydreams) and gives a lesson to an apparently hopeless flautist; the super shovels the sidewalk and happily returns to his libidinous wife; a bureaucrat goes to his office, leaving his frustrated wife to drink away her loneliness.

Ties — Dina Velikovskaya (Germany/Russia)
As a young woman leaves for college, a thread from her skirt gets caught on her old swing. When she walks to the waiting cab, her skirt doesn’t unravel, but the swing does. All the lines that compose the swing pull away until it collapses. But it doesn’t stop there: apparently, all the objects we’ve seen — the house, the yard, even her parents — are connected lines of the same thread. As she gets on a plane and flies away, the contents of her home, then the building itself, and finally even her father all come unraveled. Only the actions of her mom are able to break the thread and stop this wholesale destruction, and even reconstruct her husband out of the jumble of thread.

Based on a (possibly autobiographical) fable by Jean Giono, the hand-drawn epic narrated by Christopher Plummer is a prescient environmentalist plea: It tells the story of a young man’s encounter with an isolated shepherd, Elzéard Bouffier, who is determined to renew his barren landscape by planting thousands of trees. As the shepherd’s efforts bear fruit, the film’s palette gradually moves from dusty browns to a range of colors, evoking memories of the great impressionist painters.

Back (1924-2013) was himself an avid defender of animals and the environment — a lifelong vegetarian who planted some 10,000 trees on his country estate outside Montreal, and a founder of the Quebec Society for the Defense of Animals and Society for Overcoming Pollution.

“I can’t emphasize how great an impact this film had on me when it was first released,” says Diamond. “It was an inspiration, both aesthetically and ideologically — and its message is even more relevant as the effects of global climate change become increasingly devastating. We included it in Expanded Entertainment’s The 21st International Tournée of Animation (1988) — its first release after winning the Academy Award — and showed it across North American in art house theaters. More recently, I encouraged the Academy Foundation to restore and remaster it, which enabled this beautiful digital print. This story of one man’s success at battling the world’s deterioration is the perfect note of hope to end on.”

As a bonus, an exhibition of original production art from the films listed below will be presented at selected art house theaters and on college and university campuses.

The Animation Show of Shows is funded by major studios, companies, schools and hundreds of animation lovers around the world. Learn more about the films in current and past programs and their makers and stay informed of theatrical engagements by signing up at animationshowofshows.com.

You can also watch trailers and teasers for the films on the Animation Show of Shows /Acme Filmworks YouTube channel.