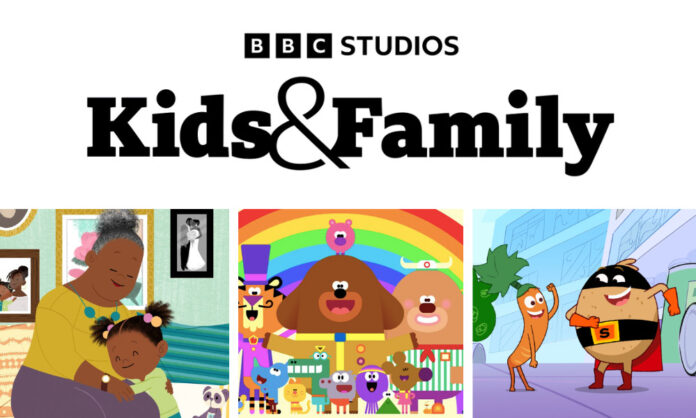 ***This article originally appeared in the December ’22 issue of Animation Magzine (No. 325)***

Zoe Bamsey, Head of Animation Development, and Tony Reed, Production Creative Director at BBC Studios Kids & Family Productions, were kind enough to answer a few of our questions about the latest changes at the public broadcaster’s venerable animation department.

Animation Magazine: Can you tell us how long you have been with the BBC?

Tony Reed: I have been with K&F since its inception in April 2022, but before that I’d been in BBC Children’s since 2001, originally employed to produce content for two new, then unnamed, BBC Children’s digital channels which became CBeebies and CBBC. During my time in BBC Children’s, I produced a variety of genres for CBeebies and worked in the development team creating new shows for both digital channels. Since 2017, I have been the genre lead for animation and spent the last five years overseeing animation development and production. In this role, I managed the in-house team which generated and sourced IP, bringing shows such as Danger Mouse, Go Jetters, Love Monster, JoJo & Gran Gran and now Supertato to life. As the business grew, we expanded our development team and appointed Zoe Bamsey as our head of animation development. Zoe is now the principal contact for animation development while I focus on development into production/pre-production and production.

Zoe Bamsey: I joined the BBC a year and a half ago. I was brought in to lead and develop a six-plus animation slate. Prior to my arrival, only two shows had been made within the six-plus space: Danger Mouse and Strange Hill High — everything else from our department was for preschoolers, and they had a strong track record in that arena with hits such as Love Monster, Go Jetters and JoJo & Gran Gran. The ambition was to make creative driven shows that would thrive not just within the U.K. but could work successfully globally. We now have ten shows that are for the older audience which we are pitching through at various markets across the year, and now I am turning the spotlight back on pre-school. It’s going to be a busy year!

Which new shows are you introducing at the content markets this year?

Tony: I’m very excited for Supertato to be taken to market. Making a laugh-out-loud comedy for preschoolers is challenging, but I believe we have created a classic comedy that a broad target age range will enjoy and we are confident it will appeal to the international markets.

Zoe: In the U.K. and globally we know there is a desire for comedy and therefore all the projects we are introducing at this market have varying degrees of comedy. All our projects connect to our audiences with great characters and great stories at the heart. We lean strongly on the creator-led model for this space, with a special emphasis in U.K.-based voices. On our roster we have a couple of 2D action-comedy series, one preschool magical family comedy and another six-plus irreverent comedy sitcom.

What kind of impact did the recent restructures have on the animation division?

Tony: I believe moving BBC Children’s In-House Production from the public service side of the BBC group to the commercial side, BBC Studios Kids & Family, is hugely beneficial. Not only does it allow us to grow our business but also consolidates a huge amount of cross-business and cross-genre expertise, bringing specialists in children’s content production under one roof. It will help us to fulfil our potential, grow our business and most importantly deliver the very best animated content to U.K. and global audiences.

What is your take on the current challenging climate for animation in the U.K. right now?

Tony: It is wonderful that the U.K. animation industry seems busier than ever, but finding and retaining talent is a huge challenge. It’s a very competitive market place, and has been for a while, with rates inflating all the time, making it extremely difficult to get the right talent. One approach we have found successful is offering mentorships both internally and with our creative partners. This not only benefits the diversification of our teams but allows us to bring in more novice talent who benefit hugely from working with experienced HODs and grow in-role on our projects. Having grown them on one project, we then hope to retain them by moving them onto our other productions and recommissions where they can hone their skills further.

What types of shows are you in the market for these days?

Zoe: If you have an original idea and you work in the animation industry at any level, come and see us at the markets. We are interested in existing IP, whether that be picture books, graphic novels or YA literature. Our teams have a track record of helping creators develop ideas into “pitchable” formats and we are particularly keen to hear from creators who feel that they might need a level of support germinating an idea into a series. We have access to a range of animation studios, composers, writers, etc. to help support and build your project and we foster a culture of collaboration. We are looking for fresh, unique, heartfelt ideas. It is amazing when a show is pitched from a personal place it generally has more of a universal appeal as the audience resonates with the characters and their experiences.

Which animated show or movie made the biggest impression on you growing up?

Tony: I grew up in the U.K. in the ’70s and ’80s when there were three or four channels and limited hours of children’s TV. For me, cartoons such as Scooby-Doo (I named my dog Scooby!) and Tom & Jerry were real appointments to view when I was younger, and in my early teens He-Man and the Masters of the Universe and ThunderCats. I also loved the comedy greats such as Chaplin and Laurel and Hardy and so loved seeing the comedy routines and tropes founded by them playing out across the cartoons I loved so much.

Zoe: The first animated film I saw at the cinema was Disney’s Bambi. Obviously, I left the movie in floods of tears, but I just remember the scene from “April Showers” and it made me look at animation in a whole new light. Last year, someone used the same scene in a pitch to emphasize the importance of music and sound, and it evoked the same emotions that I had when I was a child — it took me right back and it made me realize what a lasting impression that movie had on me.

What is the biggest no-no when people approach you with their animation pitches?

Zoe: I have sat in a pitch that lasted an hour and a half with a pitch deck of 80 pages in length — and at the end, I still did not have a clue what the premise of the show was! If you are going to pitch a show, make sure you have clarity of the concept and that you can pitch it in a few lines to capture someone’s attention. If you do a thorough pitch it really shouldn’t last more than 10 minutes, and you must pitch from a place where you genuinely believe in the project. Also, if you really ‘believe,’ don’t give up. Just because someone passes doesn’t mean that every exec is going to pass … as someone who has been on both sides of the table, every commissioner can tell a story of a show they have rejected that has become a huge hit. It does work both ways, but with an 80-page pitch you’re likely to lose your audience at ‘hello!’