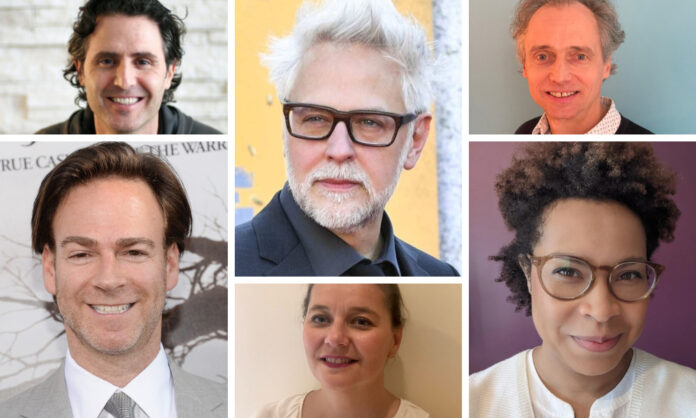 Warner Bros. Discovery made the unexpected announcement that blockbuster filmmaker James Gunn and producer Peter Safran have been tapped as co-Chairs & co-CEOs of DC Studios, heading up the comics-based entertainment brand’s film, TV and animation efforts. The news was shared via THR Tuesday, wrapping up WBD CEO David Zaslav’s search for a replacement for DC Films head Walter Hamada, who exited last week.

Gunn will focus on the creative side of DC Studios activities, while Safran heads up business and production concerns. Both will continue to direct and produce projects at the studio, reporting directly to Zaslav and working closely with the top executives at Warner Bros. film’s Michael De Luca and Pamela Abdy. Gunn’s reported four-year deal includes an exclusivity agreement with DC.

“DC has among the most entertaining, powerful, and iconic characters in the world and I am thrilled to have the singular and complementary talents of James and Peter joining our world-class team and overseeing the creative direction of the storied DC Universe,” Zaslav said in a statement. “Their decades of experience in filmmaking, close ties to the creative community, and proven track record thrilling superhero fans around the globe make them uniquely qualified to develop a long-term strategy across film, TV, and animation, and take this iconic franchise to the next level of creative storytelling.”

BWA Studios, the only Black woman-owned and operated animation studio in North America, has brought on award-winning executive producer Fatimah Abdullah as Head of the equity-driven toon shop. Founder & CEO Taylor K. Shaw told Deadline: “We are very excited to bring Fatimah into the fold to oversee our commercial and Originals divisions. Her expertise in the animation, VFX and VR/AR spaces will catapult BWA to new heights as we fortify our studio as a power player in both the production services and advertising worlds.”

Abdullah brings more than 15 years of experience in advertising and entertainment to her new post. Specializing in animation and VFX, she has spearheaded VR, TV and games production across all platforms for global brands including HBO, Sesame Street, PBS KIDS, Cartoon Network and Nickelodeon. Before joining BWA Studios, she was a Series Producer at 9 Story Media and previously served as Executive Producer for design/animation studio Primal Screen and immersive outfit TRICK 3D.

BWA Studios upcoming projects include HBO’s upcoming Kamau Bell documentary, A&E’s James Brown docuseries and is in production on Barbie: Life in the City with Mattel. Under an agreement with Warner Bros. Discovery’s 150 label, BWA is working on a live-action + animated segments show The Girls Are Alright, created and written by Shaw, and kids’ animated series Galaxy and the Greater Good, created by Dawn-Lyen Gardner and Daniel Spurgeon — both are being presented at UrbanWorld Festival.

Barillaro began his career in animation at 16 years of age and joined Pixar Animation Studios in January 1997, where he worked for nearly 25 years, animation feature films from A Bug’s Life (1998) to Lightyear (2022). He became a directing animator on Finding Nemo (2003) and a supervising animator for The
Incredibles (2004), WALL•E (2008), Brave (2012) and The Incredibles 2 (2018). In 202,1 he directed the short, Chore Day – The Incredibles Way. He has been honored with an Annie Award, ICFF Award and in 2018, was recognized by the House of Commons of Canada for his artistic and cultural contribution to the city of Niagara Falls.

Barillaro’s addition further expands the team following the hire of fellow Pixar veteran David Park as Head of Production and Executive Producer last year, and Nicki Cortese as Head of Development earlier this year. Barillaro will work closely with Park, Cortese, Executive Producer Debbie Crosscup and PASSION Pictures Founder, Executive Creative Director and fellow Oscar winner Andrew Ruhemann, to build and develop the production slate in all areas from writing and directing through to research, development and full service production.

François-Xavier de Maistre, the Group’s EVP Human Resources for more than five years, is moving to the newly created position of Group Chief impact Officer. Reporting directly to CEO Marc du Pontavice, de Maistre will be responsible
for ensuring that progress is made on these issues in consultation with the members of the Executive Board and in line with the company’s strategic priorities.

“We are pleased that François-Xavier de Maistre will manage a portfolio of such importance, which, despite delivering remarkable results in recent years, will be expanded to make the Xilam Group an exemplary player in this field,” said du Pontavice. “He will be tasked with building engagement throughout the organization and with its stakeholders around three areas: Business, People and Environment. François-Xavier has held a number of senior positions in the company over the past 20 years, where he has always shown a remarkable capacity to adapt and innovate. His many strengths will be invaluable to enable the Group to successfully develop its CSR approach for the coming years.”

Anne Hemery is therefore taking up the post of EVP Human Resources. She will be tasked with continuing to develop the Group’s human resources policy, supporting the Group in its strong growth and hiring, retaining and managing talent in artistic, technical and support functions. Hemery has worked for more than 15 years in various creative industries including publishing, advertising and design, with the capacity to bring new practices to benefit Xilam’s corporate development and social progress.

Hemery will manage the current Human Resources team of four people. Working in close collaboration with de Maistre, and at his instigation, Hemery and her team will support the successful implementation and roll out of projects and initiatives on corporate social and environmental responsibility within the Group.